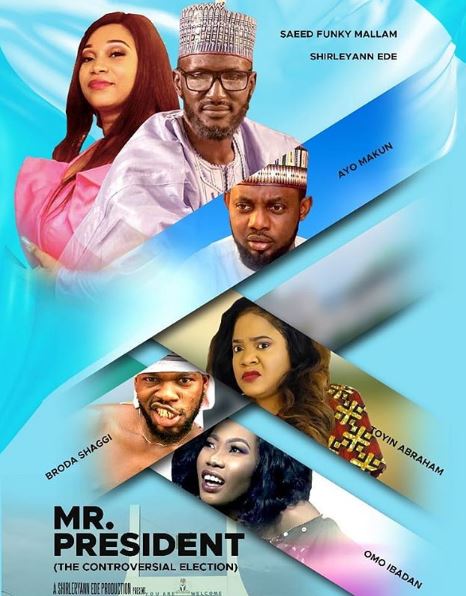 Nollywood is set to experience the new intriguing yet entertaining movie, ‘Mr President’ powered by Little Brother Global Entertainment from March 1, 2019 in cinemas nationwide. The movie’s release coincides with the Nigeria’s general election as it’s a script from political and election realities in this part of Africa.

‘Mr President’ movie engages high number of known stars and cinemas faces like Toyin Abraham, Ayo Makun (AY), Broda Shaggi, Funky Mallam, Lizzy Jay (omo Ibadan), Padita Agu and a host of other highly cerebral actors. Among the cast also is the producer, Shirley Ann Ede whose role in the movie can be described as a statement on its own.

The movie producer, Shirley Ann Ede is one of the global thinkers who after blazing the trails abroad have returned home to push Nollywood to global standard through quality and artistic production like ‘Mr President’ and numerous others in the works. The movie, ‘Mr President’ (The Controversial Election) is yet entertaining and revolutionary at the same time.

The movie depicts how the President interrupts a football game to declare his intention to run for second term. Several issues spring up to threaten his ambition as the cunning and hilarious games of politics begin to unfold. He must listen or ignore the advice of his cabinet to determine if he would lose or win the election against a formidable opposition party.

Executive produced by Dr. Christopher Ede. The movie will be in cinemas nationwide from March 1, 2019 and promises to push the boundary beyond its current state.

Abbey cheche out with Great physician