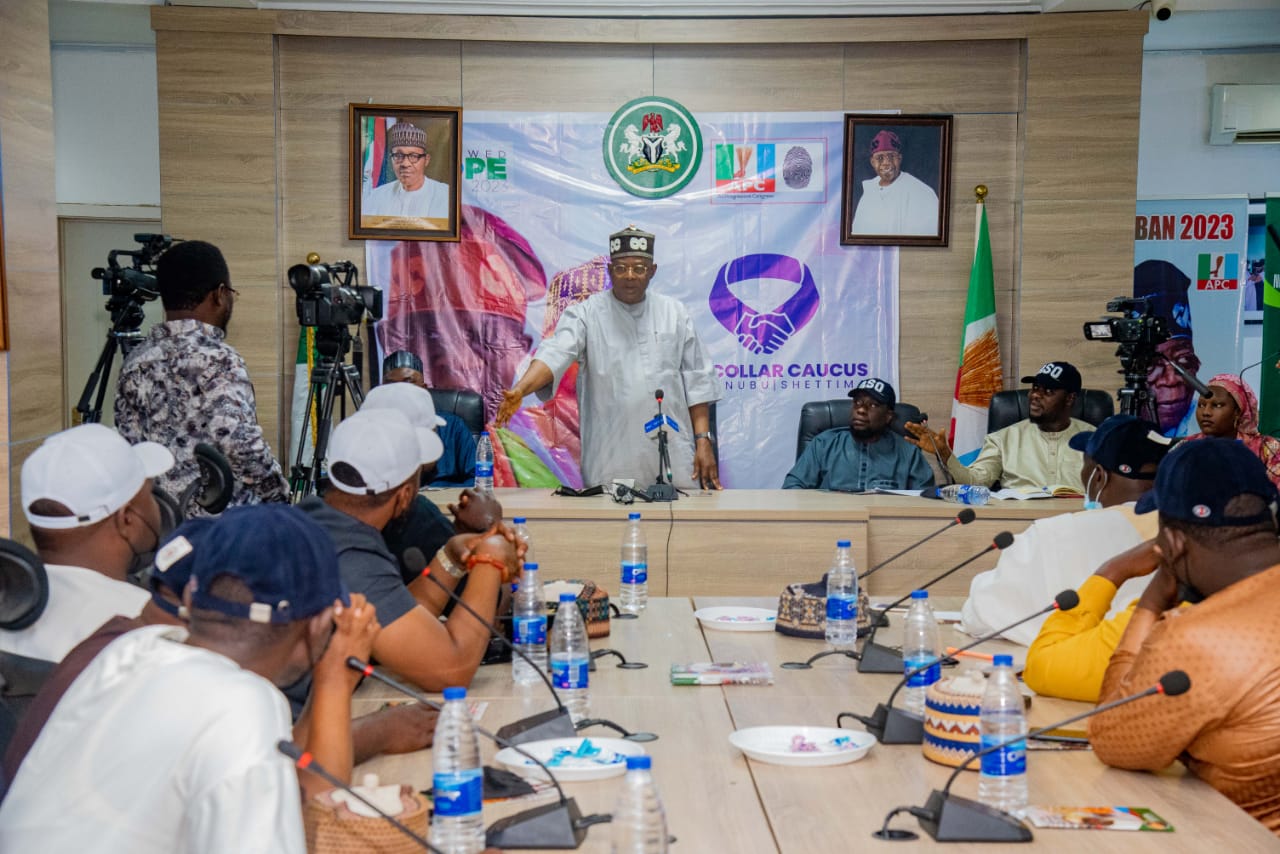 Sequel to Asiwaju’s unique style of governance, especially in the area of growing young Nigerians and preparing them for leadership, the Presidential Campaign Council PCC of the ruling All Progressives Congress APC has welcomed the youth wing of Atiku Support Organization who has abandoned the former vice president and decided to be with the national leader of the ruling party.

Fidelis Onakoma, the publicity secretary of Atiku Support Organization, Anambra state chapter spoke onbehalf of all members across 30 states today January 19, 2023 at the APC-PCC office in Abuja. He attributed their decision to abandon the Atiku campaign because they are not recognised for their hard work. They however concluded that they believe in the structure of Tinubu and his agenda for Nigerians.

According to his statement, “What we want is to be incorporated into the activities of APC in our various states and at the national level. Atiku Support Organization is the leading support organization of PDP campaign council. It’s the only support group that Atiku himself created and he made his son to be chairman. What we want is to be given that mandate to continue, go back and bring those support groups on board. After winning the election, we want all ASO members to be recognized.

“Atiku youths have seen how asiwaju runs his organisation and campaign.
For that reason, we’ve all decided to leave for the Tinubu Support Organisation under the Youth wing. I assure you that we joined the APC in good faith,” he averred.

Welcoming the new members, secretary of the presidential campaign council of the All Progressives Congress (APC) ahead of 2023, Hon. James Abiodun Faleke described the defection as a step in the right direction, saying the APC and Asiwaju has contributed a lot in the development of Nigeria.

Faleke thanked the front runners of the group. He appreciated their struggle and asured them of a fair treatment before and after Asiwaju emerges.

He said, “On behalf of our principals, Asiwaju Bola Ahmed Tinubu and Senator Kashim Shettima Mustapha, the APC PCC welcome you all.

“Your grievances are well noted and it’s not late to realize that you were in the wrong place. But because Asiwaju is a party for all, it is important that you all have on record Asiwaju’s performance when it comes to reward. The basic issues here is lack of reward from where you are coming from. One of the major thing Tinubu is known for apart from developmental structure is his reward system”.

Another delight of the defection was when the son of Asiwaju Bola Ahmed Tinubu, Seyi pledged to pay the tuition fee of Mrs. Hannah Titus children.
Titus is a widow and Kogi state coordinator. She was enlisted as one of the beneficiary of Seyi Tinubu’s foundation. 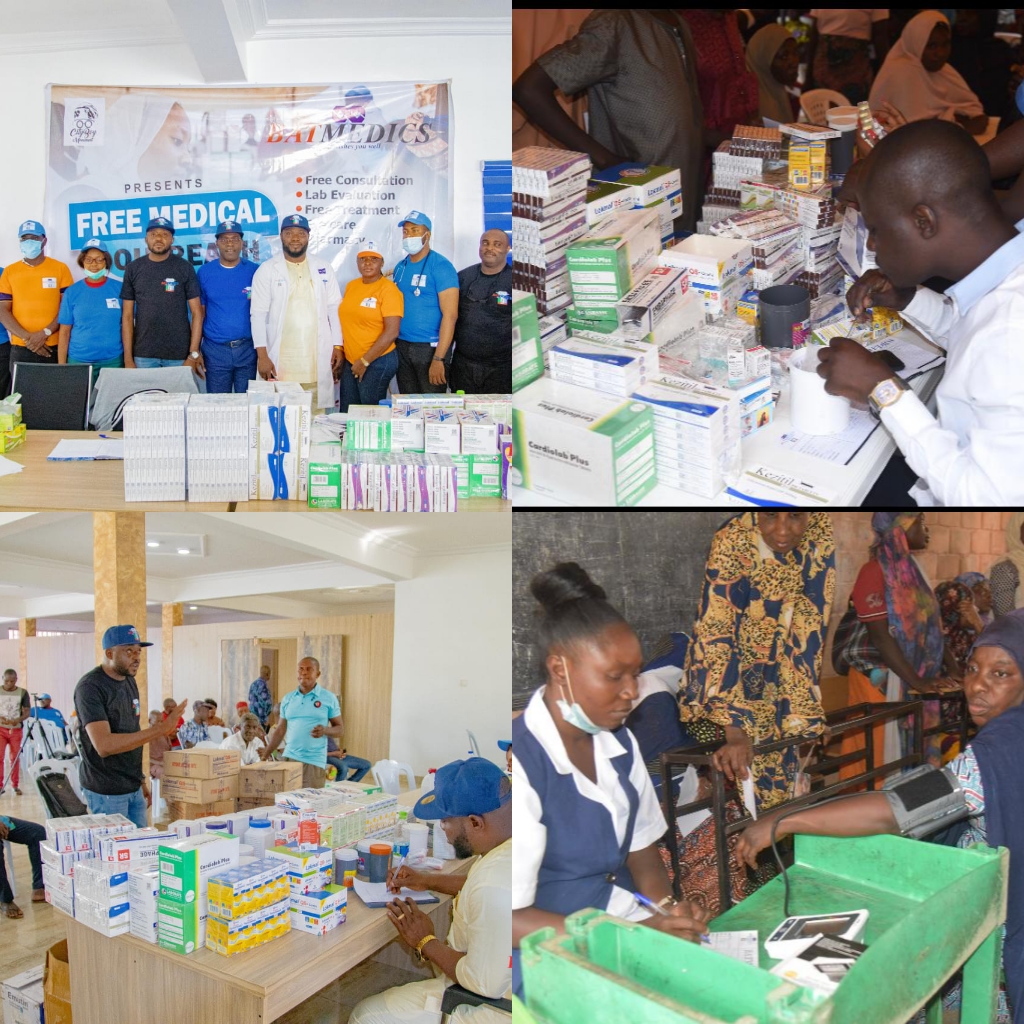 Access to basic medical healthcare is a major challenge faced by most people living in rural environments in Nigeria. Taking note of the problems associated with the inability to access affordable healthcare facilities and healthcare kits in their immediate environment, The Delta and Plateau state All Progressive Congress (APC) Campaign Organization in collaboration with the Bola Ahmed Tinubu Medical Outreach, BAT MEDICS are taking action to enhance access to free healthcare services, thereby putting joy and happiness in the faces of Residents at the weekend.

The Medical Outreach, which took place at two locations in Jos namely; the Islamic primary school Bauchi road, and Tundun Wada as well as the APC Campaign office in Asaba in Delta State had over 10,000 beneficiaries from the BAT MEDICS initiative in attendance to support the Presidential hopeful of the Federal Republic of Nigeria, Asiwaju Bola Tinubu.

The outreach witnessed a high turnout of residents at both locations in a move to benefit from the medical treatment of BAT MEDICS including elderly people in an atmosphere full of joy.

While addressing the newsmen, the Director General and Head Convener of BAT MEDICS, Pharm. Ojeje Amin Onimisi, who seems elated at the turnout for the Medical Outreach, explained the reason for the kind gesture by Asiwaju. He stressed that the program is meant to remove the barrier that is preventing poor people’s access to quality healthcare.

He noted that the move is to tell Nigerians that Asiwaju cares about affordable and free healthcare facilities for the benefit of the citizens.

Onimisi affirmed that enough drugs are available for the people. For instance, people with eye challenges, high blood pressure, malaria and Typhoid, among many others will be attended to, as there is enough equipment to take care of them.

According to him, those who are tested and needed surgery will be referred to Jos Teaching hospital and the bills will be paid by Asiwaju.

One of the beneficiaries, who
commented on behalf of others stated, “our joy knows no bounds because most of us have gone to one hospital or the other but couldn’t have access to the required medical services due to financial incapability. We can’t take care of our health challenges, hence, we appreciate Asiwaju Tinubu for bringing free Medical care to our doorstep”. She, therefore, prayed for Asiwaju Bola Tinubu that his wish to become the president of this nation will come to pass while promising to do their best by voting for and mobilising for his victory.

Another beneficiary from the Muslim community, Mariam Awwah Ballo said, ” Asiwaju is my second father when I had an accident, someone connects me to Asiwaju and he paid my treatment bills, again I am having eye challenges and recommended glasses were given to me at the Asiwaju Medical Outreach, he is the man that the cap fits”, she said.

Meanwhile, The Chairman of Jos North Local government area, Shehu Bala Usman appreciated Asiwaju for his kind gesture and assured him that the local government would mobilize for him and vote for him.

Similarly, the Asaba director of medicals APC Campaign Council Dr Benson Ayodele Cole, who welcome everyone to the Medical Outreach organized by the Bola Ahmed Tinubu Medical Team, explained that the importance of the Initiative is to care for the less privileged who are having health challenges across the state and provide them Medical needs.

A male beneficiary (name withheld) in Asaba appreciated the health Initiative. He said “I was given new eyeglasses due to my eye challenges as a civil servant, this will help me more to read.” Tinubu is the next president of this country, he knows what his people want at appropriate time. He added. 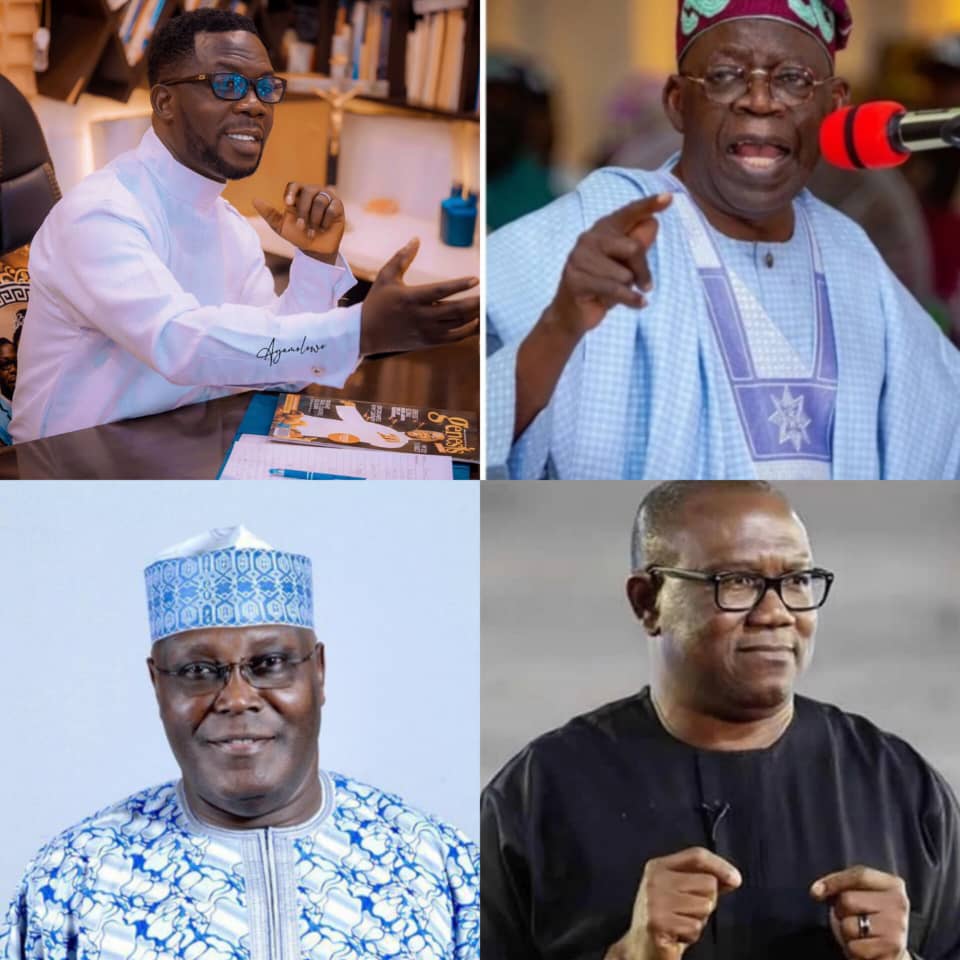 Sahara Weekly Reports That Less than few weeks ahead of the 2023 general elections, the general overseer, Genesis Global Church, Prophet Israel Oladele Ogundipe has reacted to the forthcoming general elections and has prayed to God to make his will be done in the election.

While speaking in a live-streamed ministration, Prophet Israel Oladele Ogundipe prophesized that it’s only when God’s will is done that Nigeria will be a better country to live in again.

“Nigeria is a country blessed with varieties of resources, but, however, we’ve not been so fortunate in the aspect of leadership, as we’re being ruled by leaders of like-minds, but, we believe that when God’s will is done in the forthcoming elections, Nigerians will eat the fruit of the land”, Prophet Israel Oladele Ogundipe revealed.

He, has, also, advised Nigerians to vote in the right candidate, and not go after the monetary value alone that comes from the forthcoming election, as that is just like we selling our birth right, just like it was done in the bible between Esau and Jacob.

Prophet Israel Oladele Ogundipe is a preacher of love and light, whose preaching focuses on repentance, and the creation of a better world to live in. 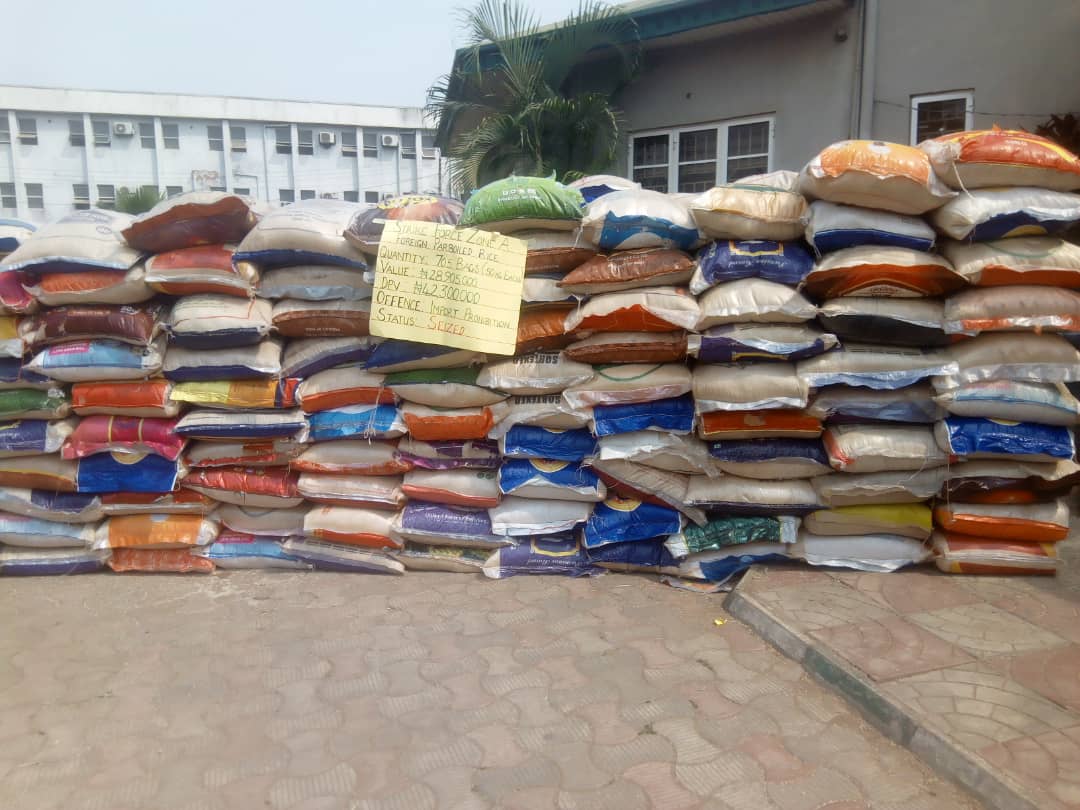 Sahara Weekly Reports That The Comptroller-General of Customs Strike Force Team Zone A, of the Nigeria Customs Service has made seizure of a truck laden with Cannabis sativa around the Lekki axis of Lagos with a duty paid value of Five Hundred and Sixteen Million, Six Hundred Thousand Naira (N516,600,000).

Recounting the achievement, the Seizures was of intelligence and bravery of his Officers, the Coordinator of the Team, Sani Yusuf who recently got promoted to the rank of Comptroller said, it was not an easy task as the area where the Cannabis Sativa were evacuated and was surrounded with different types of people at midnight.

“This Cannabis Sativa was discovered somewhere around Lekki along the Seaside at about 2.00am, on getting there we met many Men offloading into a truck amidst of the sea waves but this truck was already loaded. There were other security Agencies too there, but we evacuated this truck and brought it here.”

Comptroller Sani Yusuf advised Parents to warn their wards against the intake of illicit drugs as the effects are bad and detrimental to their health and career. “This is the root of most social vices like robbery, kidnapping, terrorism, etc.”

Giving the scorecard of the activities of his Team in the year 2022, Sani Yusuf said the year 2022 witnessed a robust anti-smuggling drive marked by tremendous success.

“Remarkable among the seizures made within the period under review were; 225mg of Tramadol, 100mg of Sildenafil Citrate, Codeine cough syrup, Used Tyres, Bales of secondhand clothings, bags of Foreign parboiled rice, Containers of Timber, Pangolin scales, Slabs of donkey skin and Cannabis Sativa among others. All with a Duty Paid Value (DPV) of Nine Billion, One Hundred and Twenty-Two Million, Seven Hundred and Ten Thousand, Three Hundred and Fifty-Five Naira (N9,122,710,355).” Yusuf Sani said.

He also sent strong warning to all unpatriotic importers and their agents who go extra mile in daring the Nigeria Customs Service. Comptroller explained that the Seizures shall not only be impounded, but his ever-vigilant operatives will also get the Suspect arrested to face the full wrath of the law.

“For this year, we have already reinvigorated our round-the-clock operations, relying on our gallant and intelligent officers to suppress smuggling and prevent revenue loss, because our commitment to doing better in 2023 and beyond is hereby renewed.”

While thanking God for a successful war in suppressing smuggling in 2022, he also appreciated the Comptroller-General of Customs, Col. Hameed Ali, (Rtd) CFR, for assisting the Team to achieve its goals through logistics support. “I also, appreciate my officers who have been working tirelessly to ensure that our mandate is achieved.” He added.