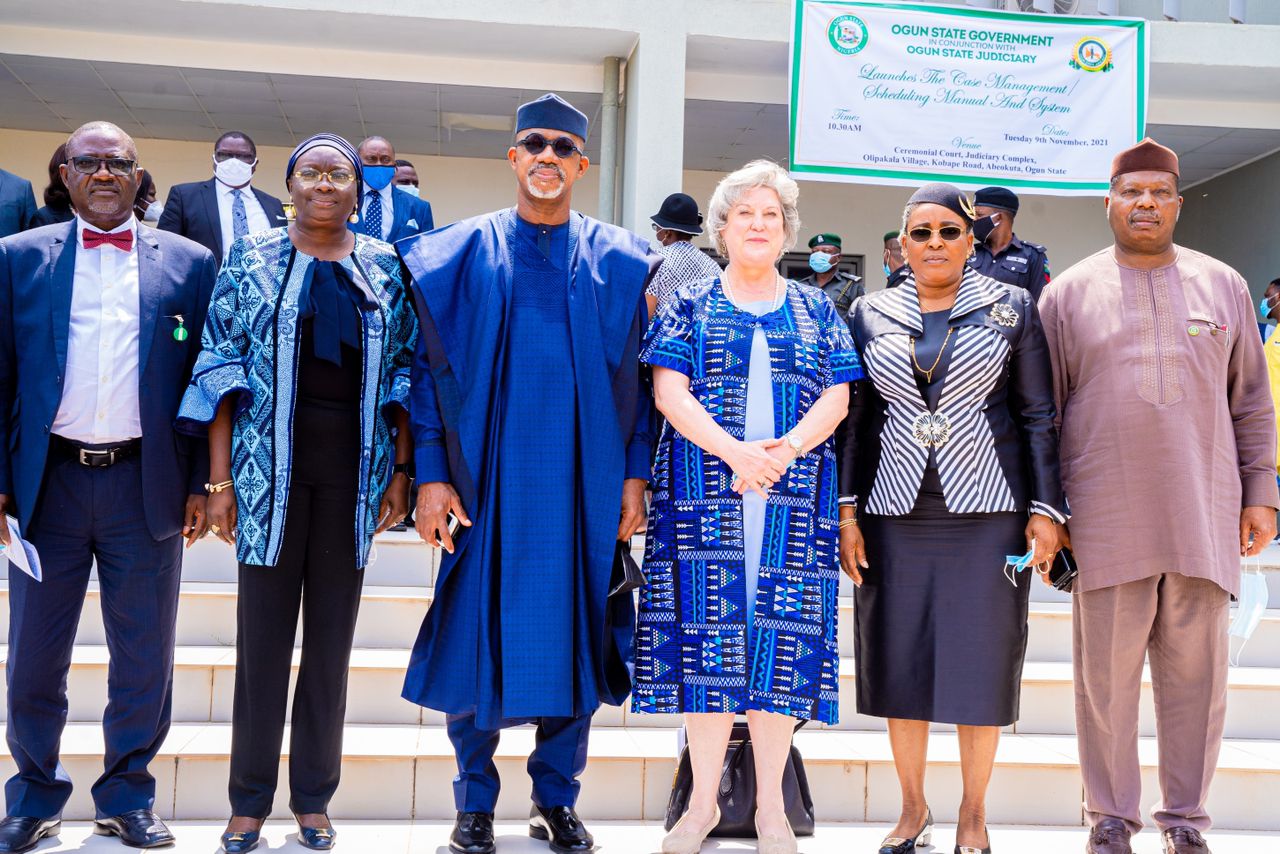 Launching the system on Tuesday inside the Ceremonial Court, Judiciary Complex, Abeokuta, the state governor, Dapo Abiodun, said the system would enhance effectiveness and efficiency of justice administration system with data-driven technology-based initiatives.

Speaking further at the event attended by the US Ambassador to Nigeria, Mary Beth Leonard, Abiodun who described the digital platform as “a legal innovation in our clime”, said Ogun is the first state to introduce such innovation in the country.

While commending the United States Government through its Embassy in Nigeria and Olaniwun Ajayi LP for the partnership with Ogun, the governor noted that partnership and ICT are two key enablers of his administration.

“Our strategic ICT initiatives have firmly entrenched Ogun State as the leading technology-enabled state in Nigeria and today, we are the country’s window and primary gateway to the digital world.

“We have no doubt that an efficient justice administration process has come into trinity with ICT and our efforts to contribute significantly to the actualisation of the vision to give Ogun State focused and qualitative governance and to create the enabling environment for a public-private sector partnership, which is fundamental to the creation of an enduring economic development and individual prosperity of the people of Ogun.

“This innovative platform which is being piloted with six judges of the Ogun State High Court will provide end-to-end digital case management tools to enable electronic management of cases to curb delays in the judicial process and promote convenience for both the judiciary and parties who come before the court”. Abiodun stated.

The governor, who said that Ogun State judiciary was the first in the country to issue Practice Directions that allowed virtual hearings to take place during the COVID 19 pandemic lockdown of 2020, added the Justice sector under the leadership of the Chief Judge; and, the Office of Attorney-General, has been moving towards the development of data-driven, technology-based reforms to improve the administration of justice.

Abiodun, while restating his administration’s commitment to a wholesome and continued development of our State and increasing prosperity for the people, submitted that “we will continue to provide good governance that is based on the tenets of inclusiveness, fairness, justice, equity, accountability, transparency and obedience to the rule of law”.

In her remarks, the Chief Judge of the state, Justice Mosunmola Dipeolu said, the case management and scheduling system would enable judges have access to the details of cases assigned to them at touch of a button from either their laptops or mobile phones.

She disclosed that the state judiciary had established and equipped a staff development centre for training of judges and other judicial staff in preparation of the digitisation of the judicial system.

The Commissioner for Justice and Attorney General of the state, Mr. Akingbolahan Adeniran in his address, disclosed that the state is currently developing forensic laboratories at the state police command headquarters in Eleweran and the Tech hub both in Abeokuta, the state capital.

According to him, the laboratories when completed would carry out finger print analyses, ballistic tests, digital evidence extraction and document examination, among others.

Get involve, save our dear country, group tells Nigerians By Ifeoma Ikem