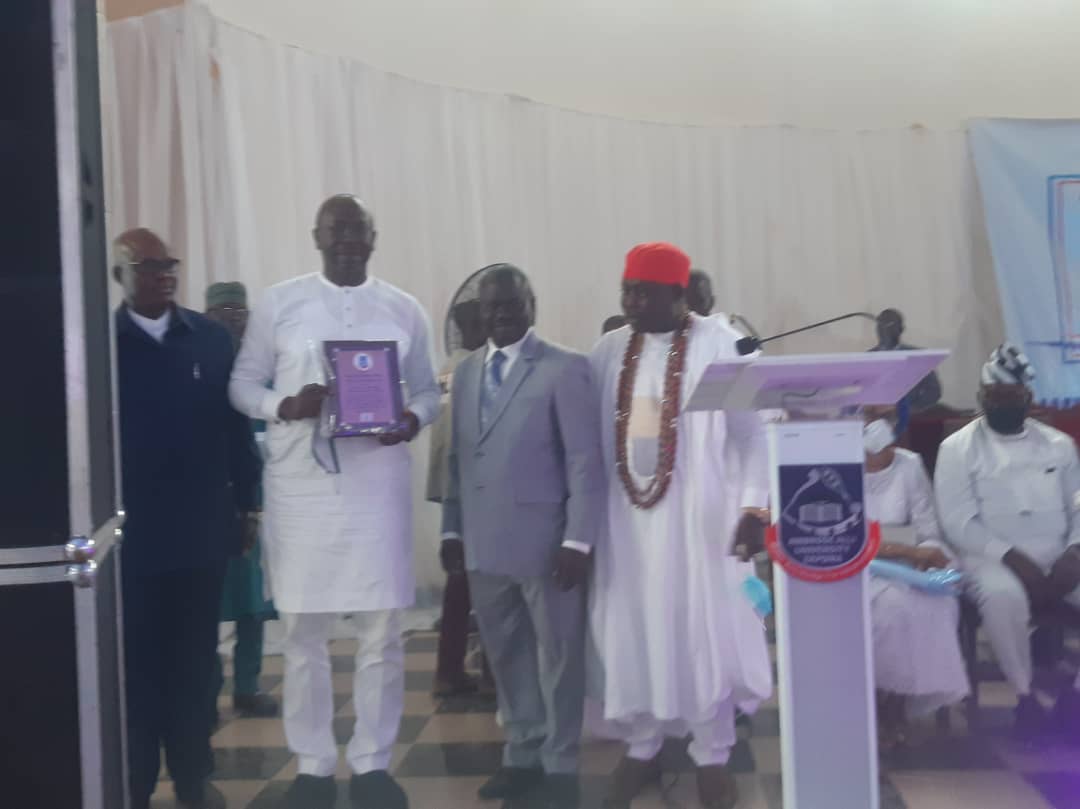 Sahara Weekly Reports That Excitement As Billionaire Leemon Ikpea, Elumelu, Imansuagbon, Others Inducted Into AAU Hall of Fame. It was the gathering of creme de la creme dignitaries at the Induction of top personalities into the Hall of fame as part of activities to mark the  40th anniversary of Edo state-owned Ambrose Ali University,  Ekpoma.

Business tycoon and Philanthropist, Chief lemon Ikpea who was represented by frontline Politician, Pastor Osagie Ize-iyamu, on Thursday became the cynosure of all eyes at the 40th-anniversary celebration and induction into the hall of fame of Ambrose Alli University (AAU) Ekpoma.

His entrance into the venue of the event attracted tens of students as they danced to music rendition by AAU’s cultural troupe to welcome into the arena guests and well-wishers.

Others inducted are Politician and Businessman, Bar Ken Imasuagbon; Minority Leader of the House of Representatives, Ndidi Elumelu.

Ikpea was represented by the Edo state 2020 governorship election candidate of the All Progressives Congress (APC), Mr. Osagie Ize-Iyamu.

Ikpea said the award was a call to continue to do more of what he is doing for humanity.

He said his vision of a viable country remains unchanged with institutions like AAU producing quality manpower.

On his part, Imansuagbon who dedicated his award in memory of the late founder said that he was motivated by the selfless service of the founder of the school, Professor Ambrose Alli.

“Alli never built empires for himself but look what has become of his name today. What are we in this generation going to live for our children.”?

In a Goodwill message, Olumelu who is an alma mata of the university said the Industry of the management and staff of the School have made them excel in their various field.

In his address, Ag Vice-Chancellor of the University, Professor Benson Osadolor, said the award and induction into the school’s hall of fame were to celebrate persons who in several ways impacted the development of the university.

It will be recalled that Oil magnate and GMD Lee Engineering Construction Limited, Chief lemon Ikpea was honored at Vanguard Personality Award of the Year as “Business Man of the Year 2020/2021” for his contribution in key sectors of the economy which includes Oil and Gass, Aviation, Real Estate and Employment Generation.

The State Governor, Godwin Obaseki who was represented by the Deputy Chief of Staff, Deputy Governor,’s Office, Jimoh Ijegbai said his administration plans to make AAU one of the top five universities in the world.