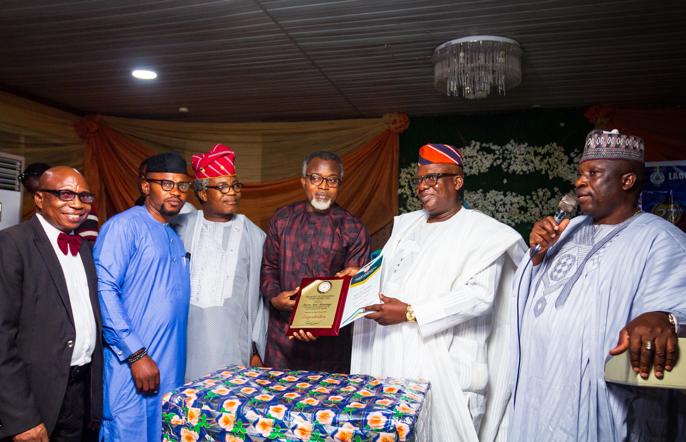 Harvey Mackay, an American businessman, author and syndicated columnist with Universal Uclick once said “A smart manager will establish a culture of gratitude.” This was the order of the day during the 27th Convocation and Award Dinner organized by the management of Lagos State Polytechnic (LASPOTECH), Ikorodu, recently in Lagos at the Airport Hotels Ikeja Banquet Hall.
The event which serves as non-student award night as well as the school’s 10th Rector, Professor Samuel Olayinka Sogunro’s last convocation was ordinarily meant to confer Honorary fellowship awards on some outstanding individuals with Aare Afe Babalola (founder Afe Babalola University) and Alhaji Babatunde Rotinwa (Chairman, Lagos state Local government service commission) to be this edition’s recipients. It was also meant to be a gathering away from the school premises by the staffs to dine and wine while the management will appreciate a few of the staffs.
It was a carefully planned event which was meant to give surprise awards to some staffs who are kept in the dark about the planned award, the cat was however let out by the rector when he was delivering his speech. The Rector explained in details the reason behind the award and how the winners were chosen.
In his words Professor Sogunro said “The 11th Governing Council of the Polytechnic approved that excellent performance must be recognized and awarded to stimulate continuous excellent output. So, a ‘Productivity Committee’ to determine winners across schools/faculty, departments and units was set-up. Selflessness, creativity, innovation, focus, results and others like that are the major criteria used in selection”, he concluded.
There are two categories of awards which are; Productivity and Excellence. Mr. Steven Adesemoye of the Mass Communications Department was awarded the overall best as the Most Outstanding Staff of the year. The award reads for his contributions towards the overall development of the Polytechnic.
In his remarked a visibly surprised winner said “What can I say? I am naturally a workaholic. I was not doing my things for reward. So, this came to me as a pleasant surprise.
“I appreciate God for His mercy. I appreciate the Management under the leadership of Professor Oluyinka Samuel Sogunro for finding me worthy of this award. I promise to triple my efforts in taking the Polytechnic of excellence to the next level. I dedicate the award to all struggling women across the globe.”
He explained further “Though, this is not my first. In 2005, I was awarded Best Staff (Technical) under the directorship of Mr Olawumi Anthony Gasper. But this very one is the biggest and somehow remarkable.” Concluded an elated Adesemoye.
It is the believe that the of the school management that such honours will go a long way in encouraging staffs to put-in more effort towards giving their best at all times to the development of the students in their care.