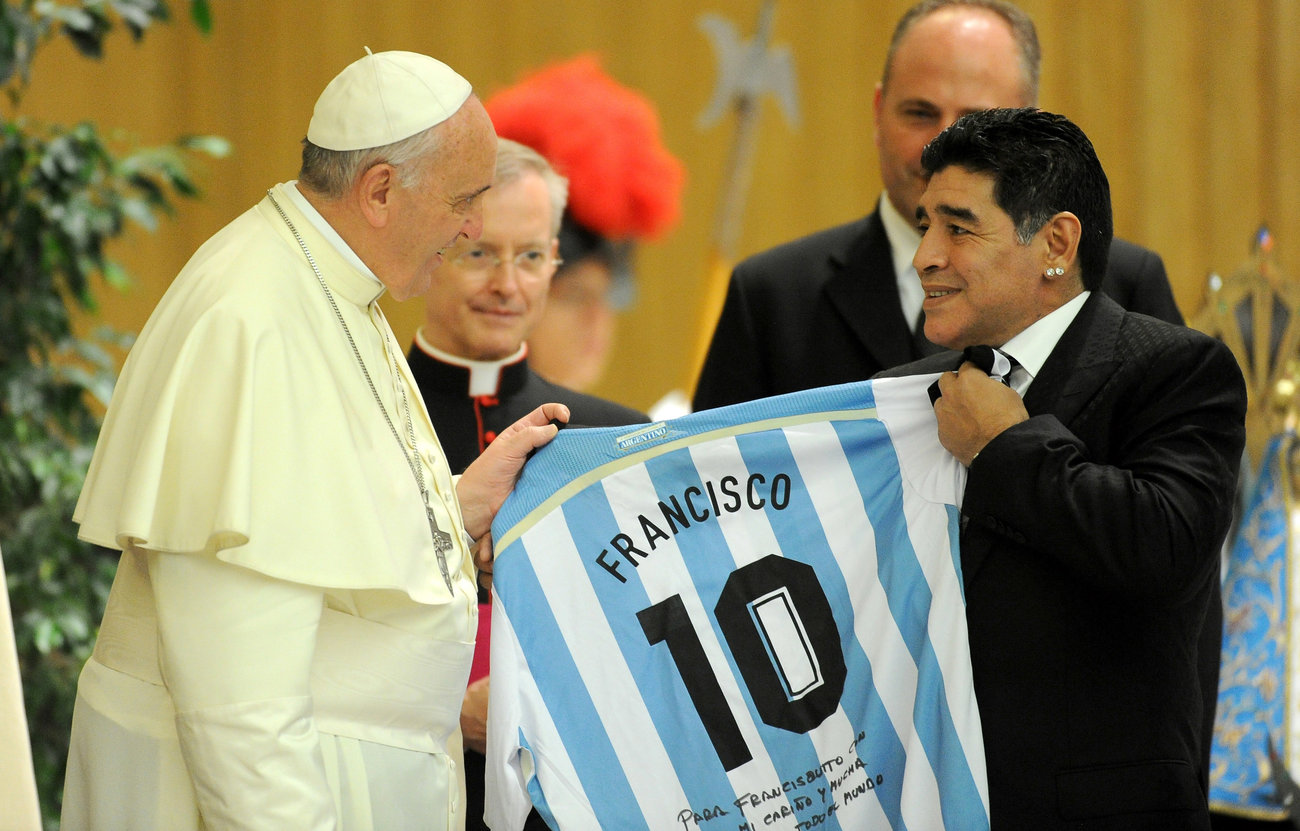 Photos: Memorable Moments Of Football Legend, Maradona- I first came to know Diego Armando Maradona in September 1993, when I was watching the qualifying match between Argentina and my country of Colombia for the 1994 FIFA World Cup. I first came to know Diego Armando Maradona in September 1993, when I was watching the qualifying match between Argentina and my country of Colombia for the 1994 FIFA World Cup.

Even though I was just a young kid at the time, I knew that Maradona, Argentina’s star player, was something special. His vision, the way he dribbled past his opponents — he was respected and adored not just in his country, but across Latin America and the world. Maradona, who rose from the slums of Buenos Aires to lead Argentina’s national team to victory in the 1986 World Cup, died Wednesday at the age of 60, according to media reports. He reportedly suffered a heart attack at his home in a suburb of Buenos Aires.

As I found out about the news of his death, I asked a few Latinos at NPR to share their memories of Maradona. For us, in our region, we take soccer as seriously as religion — and as such, we all got to experience Maradona from our countries in our own way. ROME, ITALY – SEPTEMBER 01: Pope Francis meets Diego Maradona during an audience with the players of the ‘Partita Interreligiosa Della Pace’ at Paul VI Hall before the Interreligious Match For Peace at Olimpico Stadium on September 1, 2014 in Rome, Italy. (Photo by Pier Marco Tacca/Getty Images)

Here is a selection of tributes from NPR staff members. These have been edited for length and clarity. Since I was born in the U.S., my first intimate exposure to the passion around fútbol was through my friend, colleague and former Alt.Latino co-host Jasmine Garsd. In fact, the very first episode  of Alt.Latino 10 years ago was a collection of songs about soccer from Latin America and around the world.

But the one that made her eyes both sparkle with excitement and reflect more than a bit of nostalgia was “Santa Maradona” by the rock en Español pioneers Mano Negra. The recording includes the sonic excitement that she said she could hear every weekend living near a soccer stadium in Buenos Aires. Playing this on repeat to remember Maradona is just as good as watching him playing on YouTube on repeat. – Felix Contreras, co-creator and host of  Alt.Latino. 1983: Diego Maradona of Argentina at his local ground where he first played in Argentina. Mandatory Credit: Allsport UK /Allsport

‘A Latino ambassador to the game’

I love walking past the Diego Maradona mural outside of Napoli Pasta Bar in Washington, D.C. I always get good vibes from it and love seeing a Latino displayed on a mural in the nation’s capital. I love that in one of his final years he took a job coaching second-division soccer in Sinaloa, Mexico, and nearly led them to promotion. Shows he really cared about the sport and was a Latino ambassador to the game. – Gustavo Contreras, assistant producer, All Things Considered Diego Maradona, 16, warms up 12 September 1977 in Buenos Aires. Maradona was born on the 30th of October 1960 in Villa Fiorito, one the poorest suburbs of Buenos Aires. Most people consider him as the best soccerplayer ever in the history of soccer. Het started playing when he was 9 years old. His first club was Cebollitas, the youthteam of Argentinos Juniors. Because of his unknown talent he soon got the nickname �Pibe de Oro�, which literally means �Golden Boy�. He played through his 15th for the youthteam. On his 16th he debuted in professional football with Argentinos Juniors. And a few months later he already debuted in the national team of Argentina. AFP PHOTO (Photo credit should read -/AFP via Getty Images)

‘When Argentina won … we all partied so hard’

As a morenita Mexican-Colombian kid growing up in surfer-centric Southern California, seeing Maradona beat West Germany in Mexico City was huge. I’ve never met my South American family and I’ve always been aware that I was different from the rest of my very Mexican extended family, but when Argentina won, none of that mattered and we all partied so hard. That Hand of God goal against the British was the stuff every colonized country dreams of. – Nadia Grenier, traffic coordinator. Jan 1981: General view of the scoreboard showing that Diego Maradona of Argentina has scored during a match. Mandatory Credit: Allsport UK /Allsport Argentinian midfielder Diego Maradona (C) dribbles past three English defenders on June 22, 1986 in Mexico City during the World Cup quarterfinal soccer match between Argentina and England. Maradona scored two goals, the first one with his left hand as he jumped for the ball in front of goalkeeper Peter Shilton, as Argentina beat England 2-1. (Photo by STAFF / AFP) (Photo by STAFF/AFP via Getty Images) Candles are placed next to a picture of soccer legend Diego Maradona outside the San Paolo Stadium in Naples, Italy, Wednesday, Nov. 25, 2020. Diego Maradona has died. The Argentine soccer great was among the best players ever and who led his country to the 1986 World Cup title before later struggling with cocaine use and obesity. He was 60. (AP Photo/Alessandra Tarantino) BUENOS AIRES, ARGENTINA – NOVEMBER 25: A jersey of Argentina with number ten and a black ribbon hang in a balcony of La Boca after the news of the death of Diego Maradona was known on November 25, 2020 in Buenos Aires, Argentina. Diego Maradona, considered one of the biggest football stars in history, died at 60 from a heart attack on Wednesday in Buenos Aires. (Photo by Tomas Cuesta/Getty Images) Joshua Iginla, US medical Team Offer Free healthcare For All