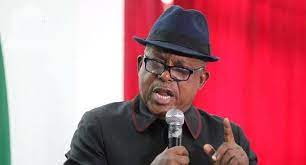 The fear that the Peoples Democratic Party (PDP) national convention may not hold as scheduled surfaced yesterday, as the suspended National Chairman of the party, Prince Uche Secondus, warned against going ahead with the convention slated for 30th and 31st of October, 2021.

Secondus, who threatened to use the court to nullify the decision, action or step taken at such Convention, argued that because of the pendency of his case at the Court of Appeal, all preparations for the convention amounted to contempt of court.

Secondus’s position was stated in a letter dated 21st of October, 2021, addressed to the acting Chairman of the party, Yemi Akinwonmi.

The letter, which was written on behalf of Secondus by his lawyer, Tayo Oyetibo reads, “having been served with an application seeking to restrain the holding of its National Convention pending the determination of the appeal filed by Prince Uche Secondus, the PDP would be embarking upon a collision course with the court if it proceeds to hold the National Convention before the hearing and determination of the Application.

“Should such contumacious conduct of holding the National Convention before the hearing and determination of the Application be embarked upon by the Party, however, we shall not hesitate to bring the full weight of the law against all national officers of the Party that are responsible for such conduct of contempt of court.

we would on our part, swiftly take steps to invoke the jurisdiction of the court to nullify any decision, action or step taken at such Convention.”

The letter drew the attention of PDP to the fact that as a result of the judgment delivered by the High Court of Rivers State whereby Prince Uche Secondus was, inter alia, restrained from performing the functions of the office of National Chairman of the PDP, an appeal has been filed and entered against the judgment at the Court of Appeal, PortHarcourt Judicial Division.

The letter said: “In addition, an Application on Notice has been filed in which Prince Uche Secondus is seeking, inter alia, the following orders:

“An order of injunction restraining the PEOPLES DEMOCRATIC PARTY, the 6th Respondent herein, whether by itself, its officers, servants, agents and or representatives from holding or conducting its National Convention scheduled for 30th and 31st October 2021 or any other date, pending the hearing and final determination of this appeal.

In the letter, Secondus explained that the application has since been served on Akinwonmi and other Respondents in the appeal.

He lamented that “notwithstanding the service of the Application for an injunction, it has come to the Notice of our client that the PDP and its officers continue to prepare to hold the National Convention on 30 and 31 October 2021”

The letter drew attention to the fact that “where a suit is brought to enjoin certain activities of which the defendant has notice, the hands of the defendant are effectually tied pending a hearing and determination even though no restraining order or preliminary injunction be issued.”

The letter further said that “the conclusion to be drawn from all the cases is that after a defendant has been notified of the pendency of a suit seeking an injunction against him even though a temporary injunction be not granted, he acts at his peril and subject to the power of the court to restore the status wholly irrespective of the merits as they may be ultimately decided.

The general practice is that on the application for an order for interlocutory injunction, all activities affecting the res are automatically terminated as a mark of respect to the court before whom the application is pending. …if…parties to the suit senselessly rush their tortious trespassory activities…in the spacious belief that that would promote their unfounded claims to the res. Nothing can be farther from the truth. Such heedless posture is, to say the least, a fragrant disrespect to the court. It clearly, in my opinion, amounts to intransigence for a party against whom an order for an injunction is sought to intensify his interference with the res.

“The court cannot be hoodwinked by such impropriety of unlawful acts in relation to the res….Nor can the person in such disrespect be allowed to take advantage of his default and flagrant intransigence.”

Related Topics:FeaturedPDPsecondusSecondus Warns PDP over its National Convention
Up Next