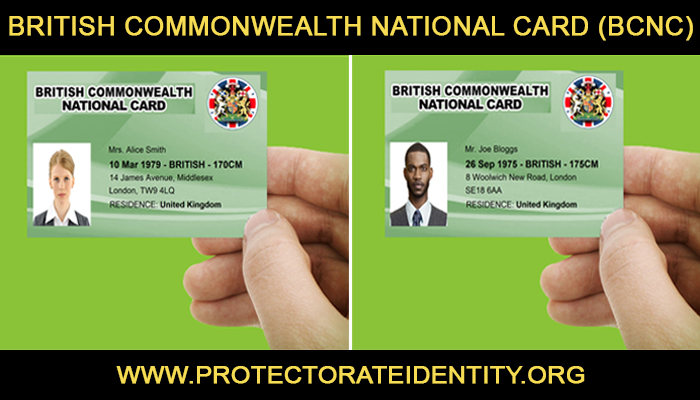 *Enforcements of Commonwealth Citizens’ Protectorate Rights of Residence, Unlimited Travel Restrictions in UK and Her Territories

*QUOTES: “Any loss of identity prompts people to seek reassurance and rediscovery of themselves by testing, even by violence. Today, the electronic revolution, the wired planet and the information environment involve everybody in everybody to the point of individual extinction” -Marshal McLuhan

HOPE has risen for the Coloured People and Commonwealth Citizens from 54 Commonwealth Nations in a bid for them to have British Citizenship Enhancement Status, protection from Unlawful arrest, Harassment, Unlimited Travel restriction in Britain and Her Territories, as well as possessing Rights of Residence in United Kingdom (UK).

This historic revelation and inspiring position was made by The Commonwealth Liberation Party (TCLP) during their ‘Unveilement of British Commonwealth National Card’ (BCNC) recently in London. The epoch-making ceremony which is backed up by the Universal Declaration of Human Rights (UDHR) 1948 will afford all Members of Commonwealth Nations, Citizens automatic British Subject Status.

“The future of greatness is the protection of Human Race, Human Values, Human Dignity, Brotherhood Bond and the Upholdment of Citizens Equal Rights, Legal Compromise, Alienation of Hate Crimes with Upholdment of Respect for Social Values and Social Integration.

“The Unveilement of the BCNC marks the beginning of Commonwealth Citizens protection in the Global World for their Upholdment of Justice, Human Rights, Civil Liberties and Human Dignity. In that regard, they are by law allowed to have Equal Rights and Equal Values to be accorded same privileges with Nationals in their respective Countries of Residence.

“The BCN Card serves as identity for the Card Holder to be able to travel within the axis of the Commonwealth Nations, while the Office of the Commissioner for Governance (CFG) and The Office the Commissioner for Diplomacy (CFD) will also be in negotiations with Non-Commonwealth Countries and their Government to accord recognition to the BCN Card.

“The BCN Card has met the threshold and stem its Autocracy of Social Integration and a Plugin of Purity of Laws. All ordinance of Government and Power Ambit must accept the BCN Card under the UDHR Convention 1948. The failure to Protocol Observance leading to the denial of the Rights of Commonwealth Citizens to free travel within the Alliance Nations jurisdictional Boundary becomes a violation of the United Nation Government Coalition.

“The Commonwealth Citizens have legitimate Rights to call themselves British Citizens for their acceptance of Integration amidst the British People in order to avoid prejudice against them.”

How to Apply for British Commonwealth National Card Online

The British Commonwealth National Card gives you Security and Protection. The Card allows you Global Social Integration, International Relations, Status Enhancement and Travel Clearance by 2021. Get a copy of your BCN Card Online by ordering the Basic Pack at www.theidc.org.uk/packages

The posers on Protectorate Identity Commission further reads: “Are You A Citizen Of The Commonwealth Countries? Are You A Migrant Living In The United Kingdom Or Europe? Has Your Visa Or Passport Expired? Has Your Human Right And Civil Liberties Been Breached? Here Is Your Final Solution For Protection Against Abuse Of Your Human Right, Violation Of Your Civil Liberties And Police Harassment. Apply for BCN Card by visiting: http://www.protectorateidentity.org/apply/

“Be A British Citizen, Get a British Passport, Use Legality Of UDHR 1948 Treaty. Order Castle Pack A And Castle Pack B Instruments of Law Online for obtainment of British Nationality at www.theidc.org.uk/packages

“The Universal Declaration of Human Rights Article 9, 13 and 15 1948 Permits your Legality. Use Political Influence Of The Commonwealth Liberation Party (TCLP) at www.thecommonwealthliberationparty.org for your Rights to integrate in the United Kingdom. Protect yourself with the British Commonwealth National Card as it Safeguard your Rights against Infringement.

Professor Thomas, Chairman TCLP declares that all Commonwealth Nations’ Governments or their Agencies are welcomed to enroll for a Franchise Scheme with the Protectorate Identity Commission for permission to be allowed authourity to issue the BCN Card in their countries.