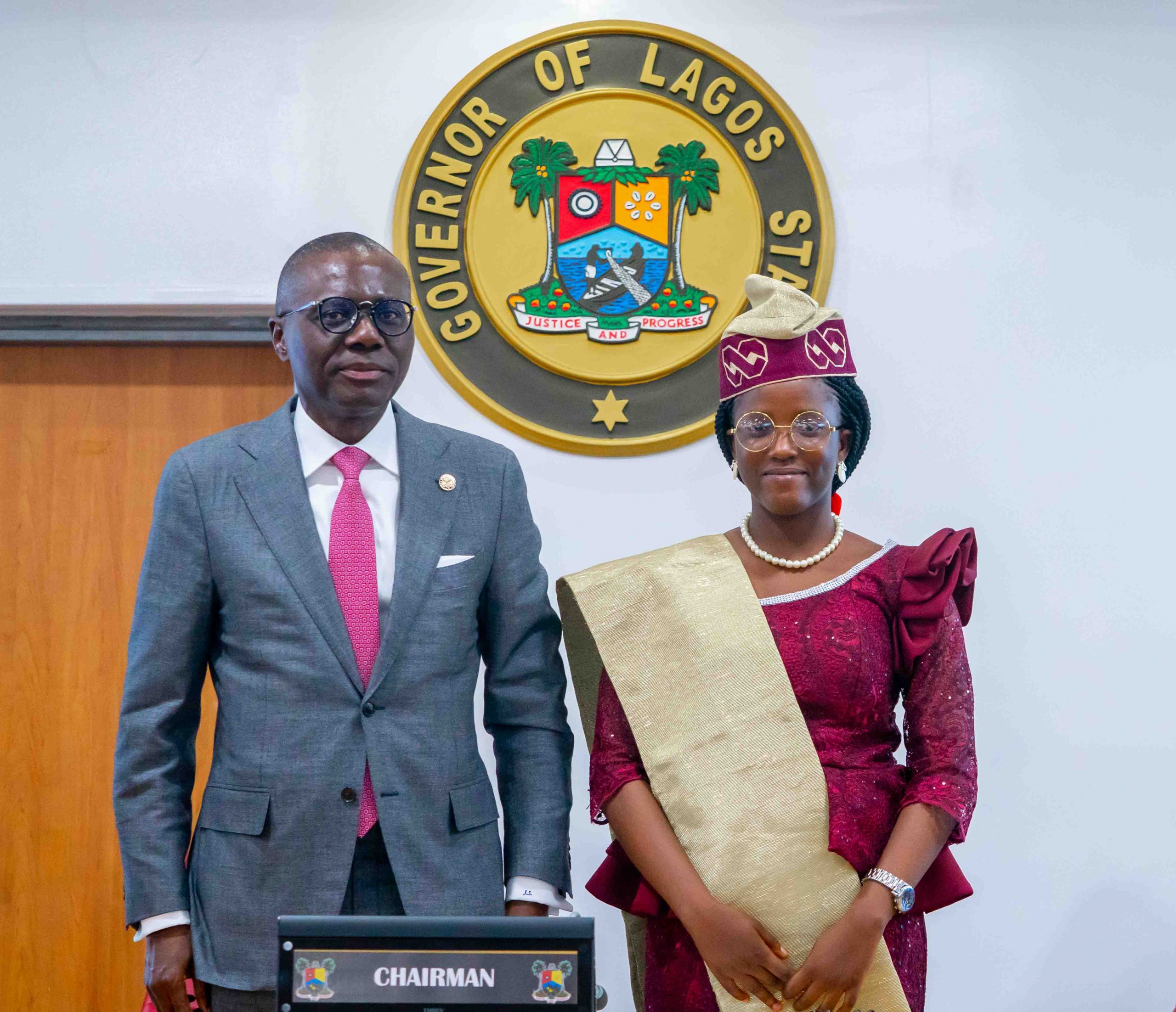 Governor Babajide Sanwo-Olu, on Monday, yielded the seat of authority for Ms. Jemimah Marcus for a brief moment to step in as one-day Governor of Lagos State.

The 17-year-old student of Angus Memorial Secondary School in Somolu, Lagos East, won the 2020 edition of the Spelling Bee Competition, thereby earning the honour to become the one-day Governor.

The weekly Executive Council meeting of the State’s cabinet was presided over by Ms. Marcus, an indigene of Edo State, as Sanwo-Olu temporarily stepped aside and observed the proceedings.

Spelling Bee competition, a contest between public schools across Lagos, is one of the legacy programmes in the State’s education sector pioneered in 2001 by the then First Lady, Senator Oluremi Tinubu through her New Era Foundation.

Since 2015, the State Government has taken full charge of the programme, collaborating with partners and stakeholders to further help realise its objectives.

Presiding over the cabinet meeting, Ms. Marcus commended the Sanwo-Olu administration for initiating “laudable” programmes through its THEMES agenda to turn around governance and service delivery.

Describing Sanwo-Olu as a “transformational leader”, the one-day Governor said the State had recorded giant strides in education, health, housing, infrastructure renewal, transportation, youth and women development in the last two years of the administration.

She said: “Mr. Governor, I commend your team for excellent leadership, as well as proactiveness in critical sectors. In education, the State Government has embarked on revamping schools and delivering new ones to improve access. This effort has been complemented with massive innovative programmes, such as EKO EXCEL, Lagos Learns Together, Read Loud, EKO Digital School, and job initiative.

“These laudable programmes have impacted on students, teachers and the out-of-school learners, as the initiatives have improved teaching and learning with excellent outcome. With the deployment of technology, I can say teaching techniques across Lagos schools are no longer what they used to be. The success of these programmes is evident in the performance of students in their academic.”

Ms. Marcus, however, solicited for more funding for her school, and schools where students learn under harsh circumstances, while also asking the Governor to support her parents in order to help her realise her future dreams.

The one-day Governor harped on the need to commit more investment in digital literacy across public schools in the State, urging Sanwo-Olu to ensure the metropolitan fibre being laid across Lagos drops in public schools as promised.

Ms. Marcus, who described the one-day governorship as a “dream come true”, praised Senator Tinubu for the legacy programmes.

Responding, Sanwo-Olu said the one-day governorship programme was one of the ways employed by the State to raise future leaders, noting that the initiative had afforded winners the opportunity not only to improve in their learning, but also expose them rudiments of public administration.

The Governor took note of Ms. Marcus’ requests for more investment in education and human capital, promising the Government would continue to prioritise education in the State.

He said: “I am delighted to say that the competition has been achieving its desired vision and objectives. The organisers will be following up on your future endeavour to ensure you acquire the right leadership skills and become responsible citizens.

“Your success at the competition is an encouragement for us to do a lot more, especially in education. We will ensure that your teachers are given the right encouragement so that they can continue to impart quality knowledge across our various schools.”

In the company of the Spelling Bee winner is the first and second runners-up, Ajose Sotin, 17, of Topo Senior Grammar School, Badagry, and Edeh Rhema, 19, of Nawair Ud-Deen Senior High School, Oyingbo.

Prior to their attendance of cabinet meeting, the Spelling Bee winners were taken on a tour of Government’s offices, building and Governor’s official residence.