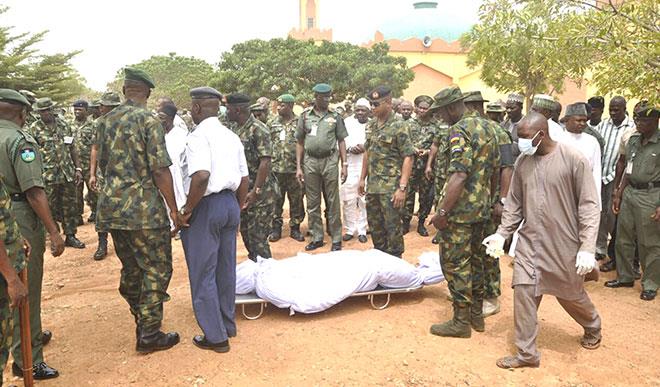 Three children went to pluck cashew from a bush opposite Ajyaita Village in Kakau District of Chikun LGA of Kaduna State on Tuesday, but ran into a very unlikely sight-a corpse, which was later identified as that of the abducted military officer.

Ajyaita village is about 10 kilometres from Kaduna city centre, and lies along the Eastern By-pass which links the Abuja-Kaduna express way to the southern part of the state.

The children had set out for the forest opposite the village on Tuesday morning and met the decomposing body by a narrow footpath leading to the forest.

Some elders told Daily Trust that the children then ran back home to reveal the unpleasant information to a farmer who they earlier met on their way to the forest.

The man was planting yam seedlings at a farm. After hearing the children’s story, he rushed to the spot to confirm it, and he in turn, ran to inform the village head.

The village head informed the police authorities who deployed some policemen to accompany him to the spot.

The police then called the army authorities who came to inspect the corpse. Therein came the painful confirmation-it was the body of Colonel Samaila Inusa, who was kidnapped a few days earlier.

“The military came with photographs and confirmed that he was the one. There was no identity card found on him, but the military identified him as the missing colonel. The place he was found is a bush path that is accessible by a car. The bush is also close to a village called Kefinary,” an elder said.

Residents of Ajyaita refused to take our correspondents to the place, saying the place had been cordoned off by soldiers who asked people to stay away for now.
Daily Trust noticed some heavily armed policemen patrolling the area while villagers were busy with their work without any noticeable tension.

The colonel was buried yesterday at the Ribadu Cantonment, Old Nigerian Defence Academy (NDA) site in Kaduna according to Islamic rites.

Draped in the national colours of green-white-green, the body arrived the old NDA cemetery around11.45am from the 44 Army Reference Hospital, Kaduna and was interred at noon after prayers at the NDA Juma’at mosque.

Relations, colleagues and friends couldn’t hold back tears, while some cried loudly.

The Chief Administrative Officer of the Nigerian Army, Major General Ado Abubakar, who represented the Chief of Army Staff, Lt. Gen. Tukur Buratai, said it was a great loss to the Nigerian Army.

He described late colonel as a very committed officer who never joked with his responsibilities and announced that the army would do everything possible to get those behind the killing.

“Col. Inusa was a great soldier. We all feel the pains. Though death is inevitable and nobody can run away from it. I came in to represent my boss, the Chief of Army Staff because the Nigerian Army is mourning one of us that had really served this country greatly and we are not really happy the way he died, but whatever happened, we will see to the end of it all,” he said.

The Commander, Nigerian Army School of Infantry, Major General Kasim Abdulkarim, said the late Samaila who served under his command was a loyal, committed and hardworking officer who would be fondly missed by his colleagues.

Gen. Abdulkarim urged officers and men of the Nigerian military to take precautionary measures for their personal safety.

The colonel’s younger brother, Mustapha Inusa, described him as generous, saying, he was good to everyone, both within and outside his family.

“He was our family’s breadwinner and we will miss his dearly. Samaila is dead and he was buried in the presence of his parents, you know what it feels like for parents to bury their children, it is not a good feeling, his parents will really feel his absence because he was the one who used to cater for them,” he said.
Colonel Inusa, who was the Commander, 81 Battalion in Bulabulin, Damboa LGA of Borno State before he became Chief Instructor at the Nigerian Army
School of Infantry, Jaji, Kaduna State, was honoured with a three- gun salute by officers.

A close friend of the deceased and former Minority Leader of the Kaduna State House of Assembly, Muhammad Ali, described him as a humble and calm person who was loved by all.

Another close family friend who simply gave her name as Mama Hauwa described the late Samaila as a perfect gentle man. She prayed that his soul rest in peace while calling on the military authorities not to relent in their resolve to get the killers.

Born in 1972 in Nasarawa LGA of Kano State, Col. Inusa attended Ramat Special Primary School from 1979 to1985 and proceeded to the Ahmadiyya Secondary School, Kano where he obtained his West African School Certificate in 1991.

He gained admission into the Nigerian Defence Academy in 1992 as a member of the 44th Regular Course and graduated in 1997 with a Bachelor’s degree in Biological Science.

He was the aide-de-camp to Sierra-Leonean Vice- President and was promoted to the rank of Colonel last year. His last appointment was as Chief Instructor at the Nigerian Army School of Infantry, Jaji.