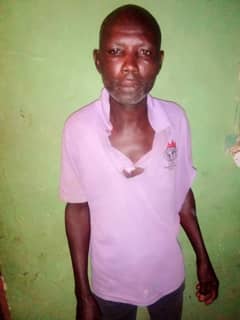 The suspect, resides at Ejigun Agbede ,Itele Ota iAdo-odo Local Government area of the state.where his Church is located at the same area.

According to the suspect,”I met the little girl coming back on her way, I ask her where is she coming from she told me that she want for an errant ,I lured her inside the uncompleted building that I need her assistant to removed some material to my area it was there I took advantage of the girl and had canal knowledge of her,said the suspect”.

Sahara weekly learnt that the Father of the victim received a call from one of his neighbour while he was at work that the suspect sexually abused his daughter who went for an errand that the suspect was caught on the act. The victim father immediately report the matter to Itele divisional station.

CSP Monday Unuigbe,the divisional police officer of Itele division directed his detectives to the area to arrests the suspect. While interrogating the suspect he claimed to be a pastor and also separated for his wife since 2016 and confessed to crime.

The Ogun State PPRO, DSP Abimbola Oyeyemi, confirmed that the suspect have been arrested.

Meanwhile,the Commissioner of Police, CP Kenneth Ebrimson, has ordered the transfer of the suspect to the Anti-Human Trafficking and Child Labour Unit of the Ogun State Criminal investigation and intelligence Department for further investigation and diligent prosecution.

CASON AGM: RALLYING THE CHURCH AGAINST ILLS OF COVID-19