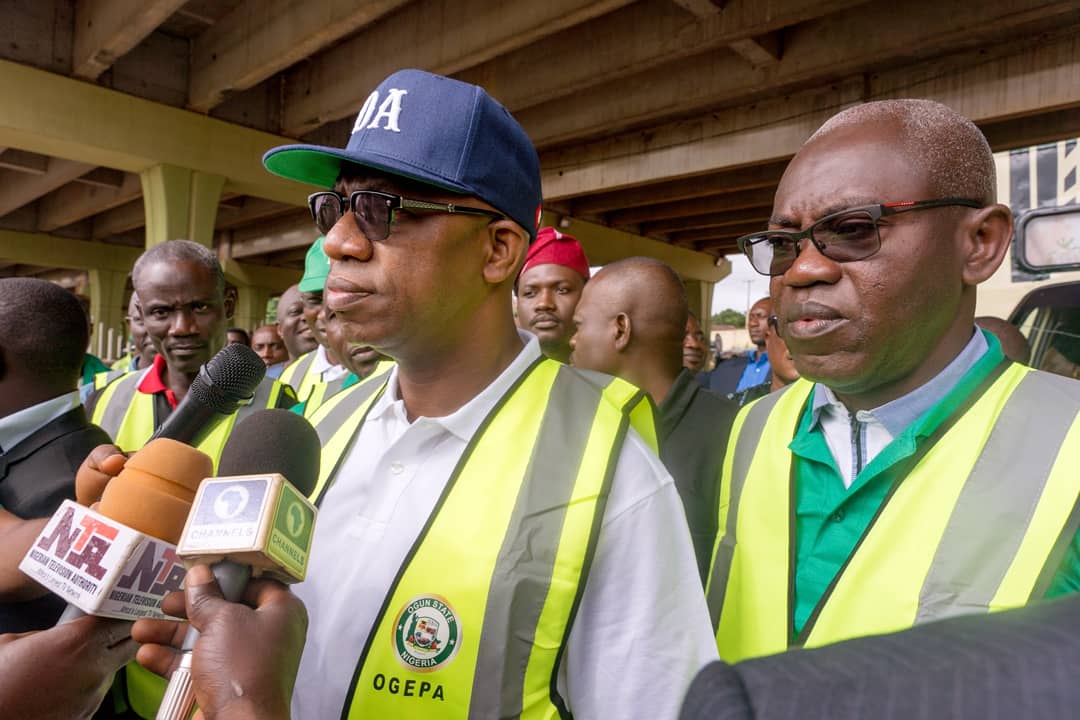 Prince Abiodun who made this known in Abeokuta, while on an inspection to monitor the level of compliance of the people of the state to  environmental sanitation, urged the people not to use the period to walk around the town, saying that offenders when caught would be arrested, fined and jailed accordingly.

” I want to enjoin all our citizen in Ogun State to ensure that they keep up with the spirit of sanitation, a day like these is dedicated for us to clean our environment, do not spend that day walking around, if you do walk around, you will be arrested just like these people, and fortunately we have a mobile court with a magistrate in there and you will be fined and sentenced and dealt with accordingly,” he said.

Abiodun however opined that it would be difficult to lure investors into the state if the first thing they see when they arrive the state was trash, urging the people to be responsible.

” We cannot say we want to join hands together and build a future together if we are not able to do the simplest of things which is as much as keeping our environment clean.

” How do we begin to encourage people to come and invest in Ogun state when the first thing they see is either trash or a habit of a people that are not able to clean their environment themselves, so I want to enjoin all of us to ensure that we  are responsible, it is called responsibility consciousness, on the part of government, we will do the needful, on the part of the citizens, please do the needful and help us so that we can help you,” he said.

He also attributed the recent cases of ecological problems in some parts of the state to the incessant blockage of drainages, blockage of waterways by people who either dump refuse in the drains or build houses on water paths, enjoining the people to support  government in its quest to maintain a clean environment,

He disclosed that government was coming up with a scheme that would be participatory and at the same time ensure that dirt are properly disposed, urging the people to ensure they keep up with the spirit of sanitation.

The Permanent Secretary, Ministry of Environment, TPL Yetunde Dina acknowledged the level of compliance of the people towards the exercise, urging residents to continually clean their environments and their drainages.

Meanwhile, the Secretary to the Ogun state Government, Mr. Olatokunbo  Talabi has decried the level of compliance of road users, especially truck drivers, saying that the state government has a zero tolerance for traffic offenders.

Talabi however described the incident where a truck driver wanted to run over a traffic vehicle around the governors office as worrisome, expressing delight at the arrest of the offender.

” I am certain that in the coming months, you will begin to see how people changes in the system, including some of the things that we witnessed today, just to obey a traffic instruction is becoming a major issue, I am confident we are starting on a good note, I am sure that the level of disobedience that we see or recklessness that we have witnessed today will not be condoned and of cause we are going to do something about it.
“I am happy that we were able to accost these gentleman today and of cause, he will be like examples for others, but, we are orderly people, we are methodical, we will take them through the normal process for punishment for such an offense,” he said.

ENVIRONMENTAL OFFENDERS IN FOR A TOUGH TIME IN OGUN- ABIODUN