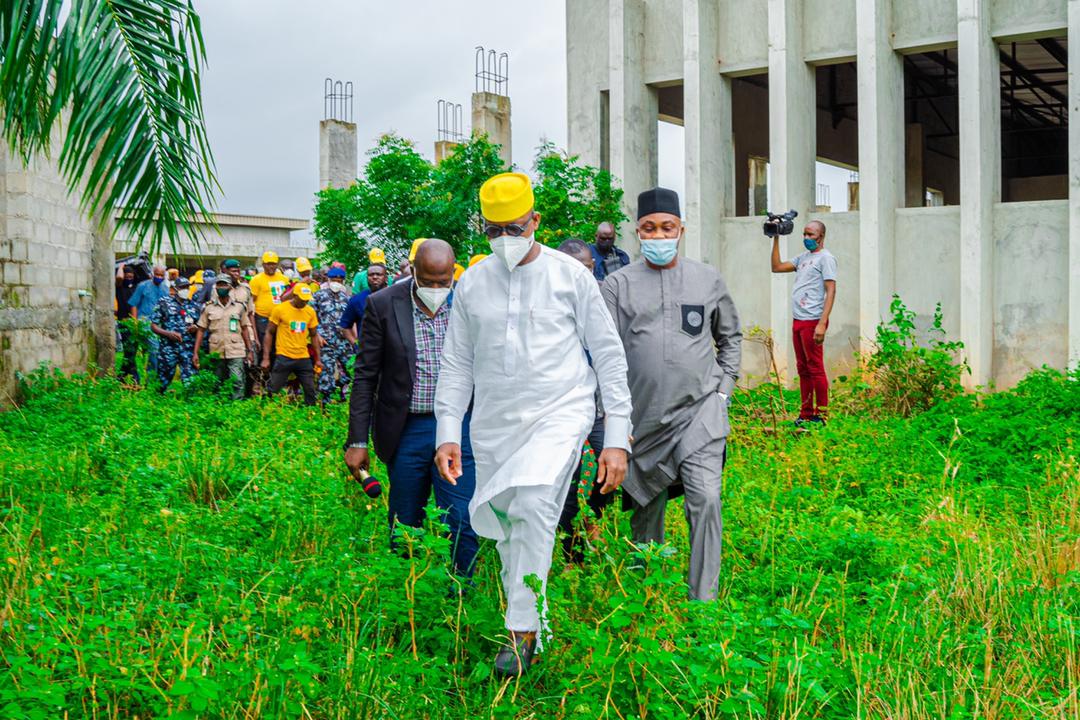 Recently, the Ogun State government ordered the contractor handling the Mowe-Ofada road reconstruction in Obafemi-Owode Local Government area of the state back to site. Contract for the reconstruction of the eight-kilometer road was awarded by the immediate past administration of Governor Ibikunle Amosun in 2013.

The people’s hopes were however dashed as the contractor stopped work in 2018, citing the non-payment of the N500 million owed it by the state government. But the sorry past is now prologue: the project stretching from Ofada Roundabout to Mowe junction and linking the Lagos-Ibadan expressway is now back on course.

For the Dapo Abiodun-led administration, completing all abandoned projects left by previous administrations, particularly those with a high potential to drive the development narrative of the Gateway State, is an article of faith. It doesn’t matter who initiated what: what matters is value for the people’s money. That is why, for instance, the cargo airport envisioned by the Gbenga Daniel administration is being built as we speak.

But we turn to the roads. When he came on board, the Ogun helmsman set up a Contract Review Committee headed by Adekunle Mokuolu with a view to revisiting all abandoned projects in the state.

The committee’s report, turned in on September 8, 2020, identified countless infractions, but the highlight was that the current administration would need more than N218 billion to complete the inherited projects spread across the three senatorial districts. A total of 114 contracts were awarded during the period under review (2009-2019), at a total cost of N349,376,997.76, while total payment for the contracts/projects stood at N130,735,758,922:75. The total sum for the unpaid Certificate of Valuation (CV) for work done stood at N20,741,675,388:76.

Apparently, successive governments embarked on white elephants for reasons of political gain. Immediately after they demolished buildings to pave way for their promised roads, they stopped work on them. The result was untold hardship for many citizens. In particular, landlords and families whose houses were demolished suffered mental anguish as they watched the sites of their former homes waste away, awaiting roads that never came.

There was no compensation whatsoever. From Akute to Alagbole and Mowe, roads were abandoned. But even with the limitations imposed on the state’s finances by the Covid-19 pandemic, the Abiodun government was determined to complete the projects, saying they were meant for the good of Ogun, and that those suffering in the communities deserved a good life. The Abiodun administration has embarked on aggressive construction and rehabilitation of the road projects.

Contractors are back on site. Instructively, the review cost is about 10 or 16 per cent of the initial or actual cost quoted by previous governments. In 2021, with the naira having fallen drastically, Abiodun is spending 15 per cent of the sum originally quoted by previous governments on the abandoned projects, showing that the initial costs were bogus. To him, all abandoned projects must be given a facelift in the interest of the people.

To take a few examples: the 42-kilometre Sagamu-Siun-Abeokuta road, which the Amosun administration awarded at a total cost of N60 billion but later abandoned, is being reconstructed by a firm, Strabic, with two layers (binding and wearing course) at a cost less than N20 billion, with street lighting. The administration has, among many others, completed the 10-lane, 19-kilometre Ijebu-Ode/Epe road linking Ogun with Lagos State, one of the best ever roads constructed in the annals of Nigeria. The Lafenwa-Olorunda-Aiyetoro road abandoned in 2012 is back to life. The Abiodun administration approved the erection of a flyover at Lafenwa and undertook the relocation of powerline at Odeda in order to pave way for the railway line passing through the state. The projects have a long-life expectancy of between 10 and 15 years before resurfacing.

Further evidence that the administration sets great story by road construction is provided by the work of the Ogun State Public Works Agency (OGPWA), which has been tasked with fixing at least 15 roads on a monthly basis across the state. This month of August, the agency is rehabilitating 13 roads. The distribution is as follows: Ogun East, five roads; Ogun Central, four roads; and Ogun West, four roads. Indeed, between January and June this year, the government has built 54 road roads across the state: 29 in Ogun Central, 10 in Ogun West 10 and 15 in Ogun East. It expended a total of N7.389bn on the projects, including Raypower, Navy-Osi-Ikola roads in Ado-Odo/Ota local government; the Fajol-Ajegunle-America Junction-Alogi road and American Junction-Unity Estate road in Abeokuta South and Odeda local government areas, and the Ejirin-Mobalufon- Oluwalogbon road (Ijebu-Ode LGA) and Ilaro-Owode road in Yewa South local government area.

In a clime marred by discontinuity politics, where politicians abandon projects only because they did not initiate them, costing taxpayers humongous losses, it is apposite to dwell on the paradigm shift in Ogun State. In his inaugural speech on May 29, 2019, Governor Abiodun placed emphasis on the upgrade, rehabilitation, repair and restructuring of township and rural roads that were of economic benefit to the state. Looking back two years after, it’s been promise made, promise kept. And that’s how it should be.

*Bakare contributes this piece from seyibakare@aol.com