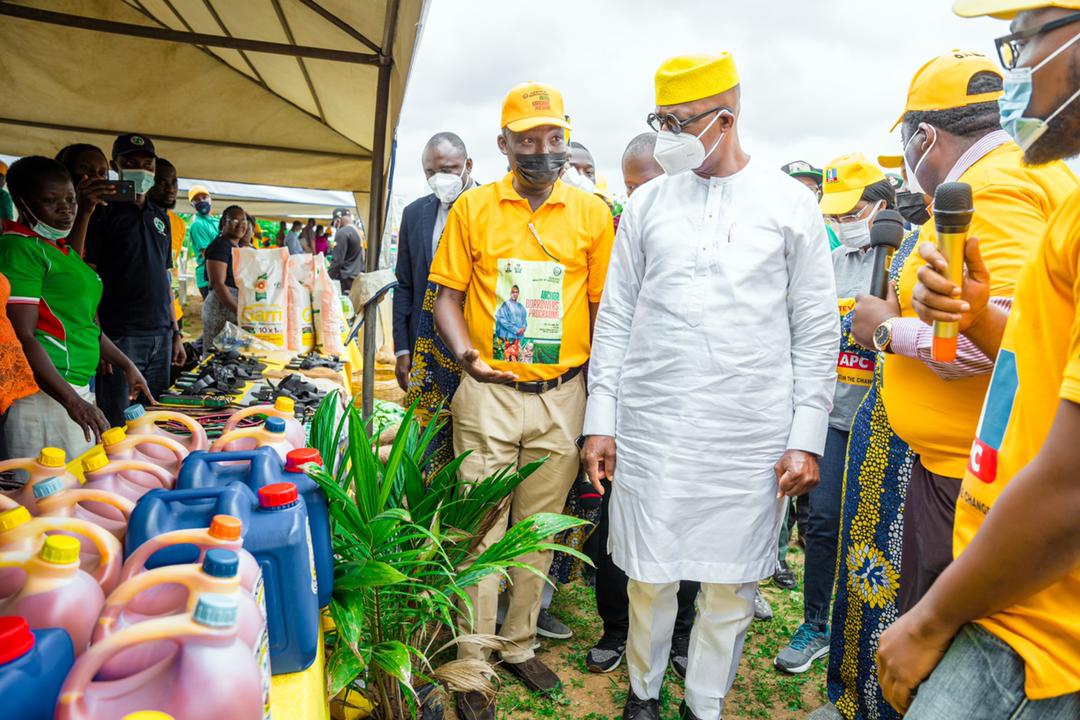 …reiterates commitment to the regeneration of state capital
The Ogun State governor, Dapo Abiodun, has disclosed that the agricultural initiative of his administration was deliberately targeted at ensuring food sufficiency and security.

He added that the initiative was also to create employment opportunities for the people especially the youths in the state.
Abiodun, who disclosed this shortly after he inspected Eweje Farm Institute, Odeda, as part of the final campaign of the All Progressives Congress (APC) for the local government elections to Odeda Local Government Area.

According to the governor, the agricultural initiative has been successful, declaring that “over seventy thousand people had benefited from the various agricultural programmes by our administration.
He said one of such initiatives, which is the Cassava Demonstration Farm and the Anchor Borrowers Programme, has become successful and placed the agric sector in Ogun on a high pedestal.
“This initiative was implemented as a way not just to ensure food sufficiency, food security, grow what you eat and eat what you grow policies of the President Buhari, it has at the same time offered employment opportunities to our people.

“This has been very successful in Ogun State, we have over seventy thousand beneficiaries of such and we will continue in this like manner”, Abiodun assured.
The governor explained further that the beneficiaries under the initiative were given parcels of land to farm, while the anchors provided the required input and State Ministry of Agriculture provided the necessary guidance by way of extension services.
While commending the Central Bank of Nigeria(CBN) for providing the beneficiaries with stipends until their crops are harvested, Abiodun said that the assistance rendered by the Apex Bank had also helped to facilitate the programme in the state.
A beneficiary, Ogunkola Gbemisola, while commending the state governor for providing them with different anchors for their various agricultural produce, noted that the agric scheme has helped in developing their economic worth.
Meanwhile, the governor has declared that his administration would complete the reconstruction of Oke-Ejigbo-Ijaye Road in the Abeokuta South Local Government Area, abandoned by the immediate past administration.
Abiodun who made this known in Ake, Abeokuta, while addressing party faithful and the residents of the LG, said his administration was poised at making the state better than it met it.
He also reiterated that he would continue to complete all abandoned projects that have a direct economic impact on the people of the state, saying the interest of the people would continue to be his priority.
While welcoming over 500 members of the Peoples Democratic Party (PDP) who decamped to the APC, called on the people of the local government to come out in their large numbers and use their votes to ensure the victory for the chairmanship candidate of the party, Omolaja Majekodunmi, at the LG poll.
Receiving Governor Abiodun earlier in his Palace, the Alake and  Paramount Ruler of Egbaland, Oba Adedotun Aremu Gbadebo commended the governor for the various road projects he has embarked upon in the state capital and across the state in the last two years.
The monarch, however, called on the party candidates not to betray the trust of the people when they eventually get into office.
Responding, Abiodun informed Alake of his administration’s decision to regenerate the state capital.
The governor, who added that a mass transit scheme would soon start across the state, noting the scheme would help develop the transport plan of the state like others cities of the world.