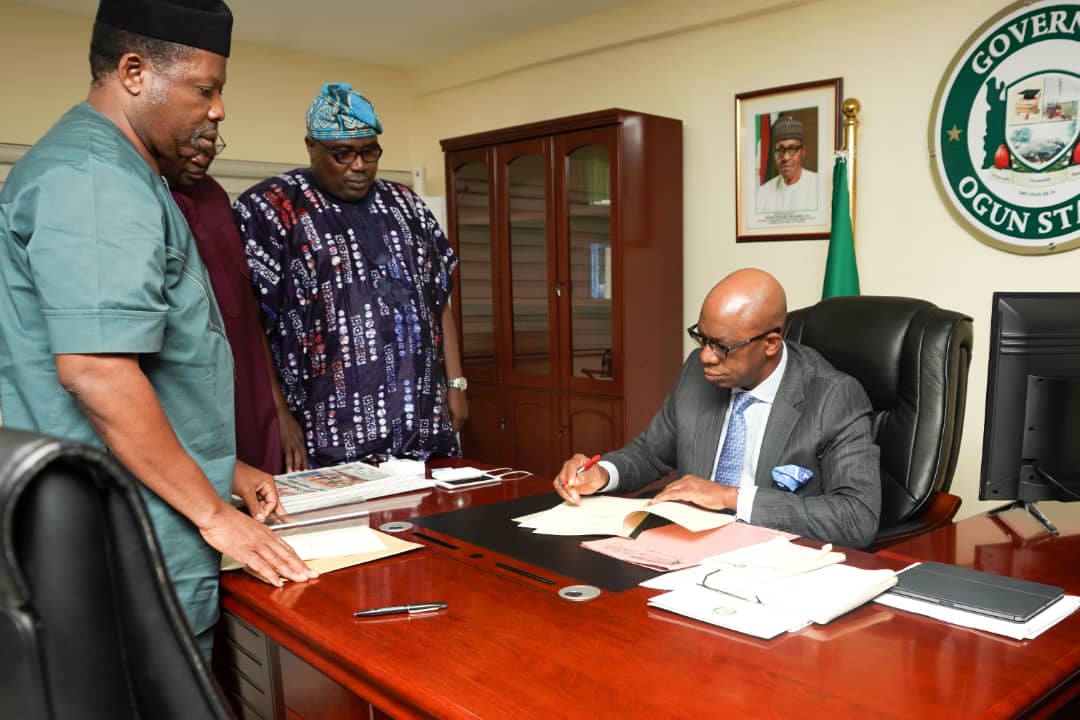 A statement by the Chief Press Secretary to the Governor, Mr. kunle Somorin stated the Bill was signed by the Governor after it was presented to him by the Speaker of the House, Rt. Hon. Olakunle Oluomo at the Governor’s office, Oke-Mosan,Abeokuta.

Similarly, the Governor has also signed into Law the Ogun State Road Mantaince Agency (Amendment) 2019, passed by the State Assembly.

Prince Abiodun, the Statement added, had last weekend inaugurated the Committee of the Trust Fund, headed by Mr. Bolaji Balogun to source for money for the acquisition and deployment of security equipment and such human materials and financial resources that would be necessary to prevent crime and preserve public peace.

The statement said the Committee is also to promote the effect encyclopedia of all security Agencies in the State, hold gifts property and money for the purpose of crime prevention, moblise funding and resources in Cash or kind from the public, private, corporate or institutional or all other sources and manage those resources in a transparent and accountable manner for the purpose of Public security.

It added that the Committee is also to reserve part of the Fund for the training and retraining of security personnel, as well as do and perform other functions for the purpose of public security as contained in the State Security Law 2011as amended by the State Security Trust Fund Law, 2019.

They statement further added that with the passing of the Bill and signing into Law, the Ogun State Road Mantaince Agency (OGROMA), deplorable township and rural roads in the State would soon begin to wear new look as the Agency swings into action.

It stated that the administration of Prince Abiodun resuscitated the agency to serve as a quick fix mechanism to address the deplorable condition of township and rural roads.