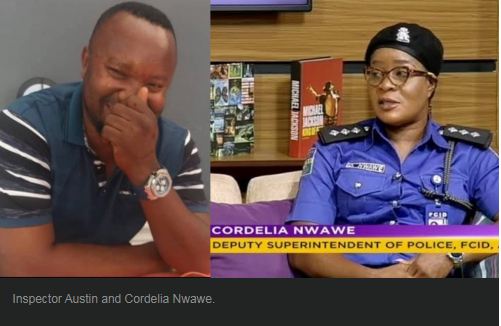 They extorted N2m from me ,a Nigerian in Diaspora alleges

The end may not have been heard of the indictment of a female Police officer, DSP Cordelia Nwawe and members of her team,attached to the Force Criminal Investigation and Intelligence Department, FCIID, Alagbon,Lagos,who were alleged to have extorted N22 million worth of bitcoin from two young Nigerians in July 2021.

This followed petitions by some Nigerians who claimed to have fallen victims of same fate as the two real estate developers identified: Morakinyo Peter and Yusuf Samson,to the Special Investigation panel instituted by the Inspector-General of Police, IGP Alkali Usman Baba,to investigate the allegation of extortion by the police officers.

It was gathered that some of the petitions were written by Nigerians who based abroad,some of whom recounted their ordeals during visits to their home country.

One of the petitions by a London- based Nigerian,Tosin Enikuomehin,alleged that DSP Cordelia and her team forced him to cough out N2 million to bail himself, three years ago.

Enikuomehin, in the petition, said, “ I had just arrived into Nigeria from London,to set up my business and further create employment for the people of my neighborhood in Lekki Lagos state.

On September 2,2019, I went to the bank to deposit some money into my GTB account in Victoria Island,when I noticed some men were staring at me strangely. I ignored them as I was in the banking hall and felt a bit safe.

“As I was walking out of the banking hall towards my car, I noticed the men were following me. I got into my car and drove off as fast as I could. On reaching LekkiToll gate,they jumped out from a van, banged on my glass violently and demanded that I scroll down my glass. I was shouting from inside my car, demanding to know who they were.

” One of them showed me an Identity card which read FCIID with his picture and name on it. I calmed down a little bit and scrolled down, speaking to them. But one of them pushed my window down forcefully, opened my car door to allow his colleagues in. They seized my phone and started yelling at me ,saying I was into illegal dealings.

“ I laughed and showed the person that earlier introduced himself to me,(Austin) my work details,my business information and also a CAC certificate to start operations in Nigeria. They told me to get to the back of my car, they handcuffed me and seized my phones.

“When I got to the police station, they demanded N20 million for bail, which I thought was insane. They started making threats at me with their guns pointed at me, saying things like if I don’t cooperate they would put a placard on my neck and label me a fraudster and also parade me on television. They even threatened to shoot my ankle.

“ At that point I started pleading with them to give me my phone so I can speak with my lawyer and a family member. They refused and said I would only get my phone if I was calling to ask for money for them, otherwise I would be locked up.

“I demanded to speak to their superior who at that time was DSP Cordelia. She also showed no remorse towards me or handled my matter professionally. Instead,she ordered them to lock me up if I didn’t pay. By then it was getting dark. They decided I was to be locked up in the cell with a bunch of suspected criminals.

While in the cell, I started thinking of what could happen if I didn’t cooperate with them. The next morning when they came to the cells, I told them that I would pay and they said my bail money was N2 million,I agreed out of fear of uncertainty.

One of the officers drove me to the bank where I withdrew N2 million cash and gave to them.

The following day after I was set free, I started feeling sick and subsequently got diagnosed with malaria. A few days later I flew out of Nigeria to regain sanity.

“Seeing the spotlight being put on these police officers is a major step forward in fighting corruption and also weeding out criminal elements within the police force.

Officer Austin is a short light skinned officer and DSP Cordelia, the lady who apparently schooled in the UK with such a bad example.

“I have the receipts of the forceful withdrawal made from my bank account and also a video evidence of me in Alagbon. I have Austin’s phone number and his colleague’s, Kenny,who equally harassed and extorted me. I also have a lot of alibis in case this is needed in bringing these policemen to justice”.

Meanwhile, there are reportedly moves by some Nigerians to truncate ongoing investigation into the alleged extortion of N22 million bitcoin. Some of these moves, as reliably gathered, are from relatives and friends of top police officers, said to be prevailing on members of the Special Investigation Panel instituted by the IGP to carry out discreet investigations.

Already, DSP Cordelia and the other Police personnel allegedly indicted in the report, had been ordered to report to the Special Investigation Panel, Force Headquarters, Abuja, since December 21,2021 to answer the allegations against them.

The Police High command in a statement signed by its Force Public Relations Officer, CP Frank Mba, stated categorically that “ the alleged actions of the Police Officers in question do not represent the standards and practices of the Nigeria Police Force and as such any officer found wanting will be visited with the full wrath of the law. Members of the public are enjoined to remain calm as the Force will provide timely updates and make the outcome of the investigation public”.