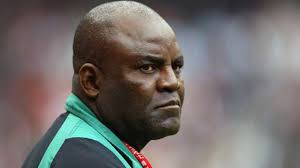 Christian Chukwu, former coach of the Super Eagles and one of Nigeria’s greatest footballers ever, will travel to the UK for further treatment in the first week of May following the footing of his medical bills by Femi Otedola, the billionaire businessman.

Otedola’s offer to foot the bill of the former captain of the national team following reports that he was battling with prostate cancer.

The $50,000 cheque was presented to Chukwu on Wednesday morning in Enugu by Philip Akinola, the COO of Zenon Petroleum and Gas Ltd, one of Otedola’s companies.

“The governor just called to thank me immensely and I spoke with Christian Chukwu too. He will be flown abroad next week. I told him he will be fine and I will make sure he is provided with the best health services,” Otedola.

Chukwu, with support from the Enugu state government, has already done an initial surgery in Nigeria and has been recuperating.