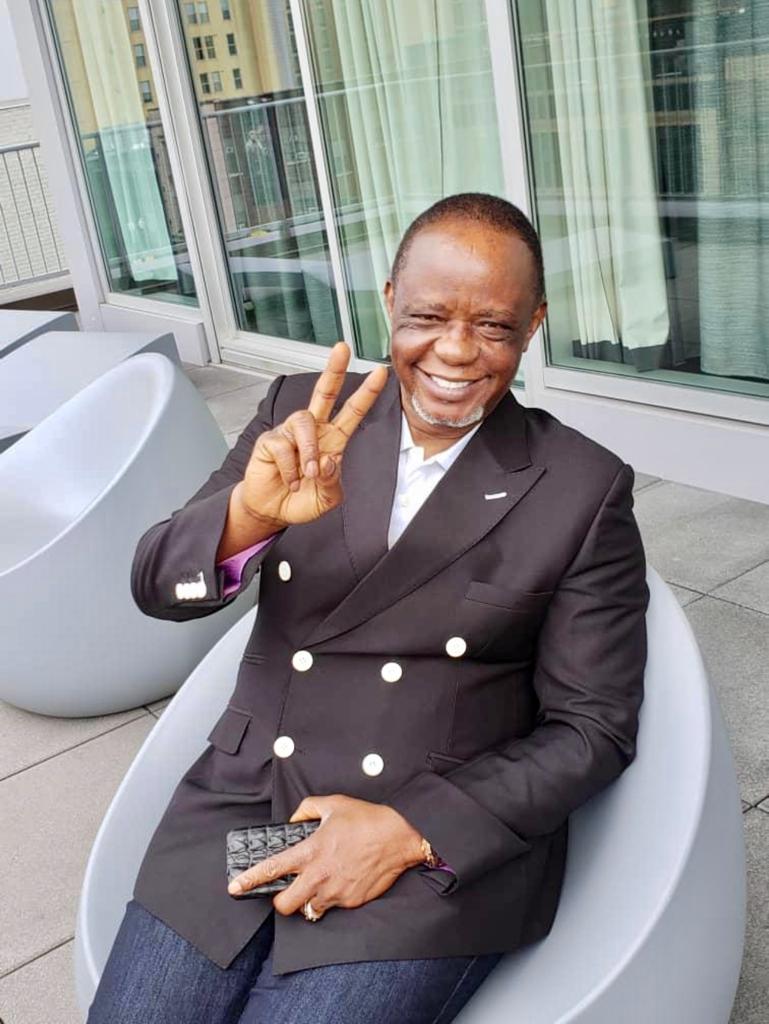 There is neither best lyric nor tenor to impart the tragedy of Capt. Idahosa Wells Okunbo’s death. News of his passing resonates, like a thunderous blow from seraph to temple, spattering the heart’s sac with mortal residue. Even now, it filters through gauze of memories, mauling the joys that I have known by his friendship.

Mourning him disrupts the balance of everything. And that is quite understandable. I am informed of his virtues by an intimacy spanning many years companionship of his charms and acquaintance with his humaneness.

His life, fragrant with mannered humility, was inspiring. And his demise inspires the lingering, mournful tribute of a sigh. But I am very much assured that Captain has gone on to a better place, where righteous souls bask in the sun-drenched bliss of rapturous recompense.

He has crossed over to the divine plane, freighted with sweet repose and rewards for his deeds. He has gone where votive luscious hyacinths relay the promise of an eternal Eden.

Now that the ticket to eternity has his name on it, I hereby pay the awkward tribute of mourning. These words would never be enough, however, to capture the towering immensity of his life.

Since I made his acquaintance many years ago, our friendship has blossomed into a bond emblematic of the best form of filial devotion and affection. I met him first through a mutual friend, Alhaji Abdulsamad Rabiu, the Chairman of BUA group, who called me one beautiful afternoon and after exchanging pleasantries, said, “Lanre, hold on for my very good friend, Captain Hosa.”

In his deep baritone voice, he said, “Lanre, Lanre, how are you? I have heard so many beautiful things about you. I don’t know why they keep writing acerbic stories about me and my partner, Tunde Ayeni. All we do is to help this country. We don’t have any country apart from Nigeria. Anyway, try to see me in my house in Lagos this weekend” We ended the conversation.

Unfortunately, I was on my way to Houston that weekend, hence I couldn’t see him as requested. Three weeks later, I met with him at his palatial mansion in Banana Island, Lagos. I would discover that beneath the glitz and glamour of being a successful businessman and a billionaire of note, with all the accoutrements of fame and fortune at his beck and call, lied an intensely humane and modestly humble personality with a heart for the greater good of his people and country.

He exuded nonpareil intelligence, analytical mind, clarity of thoughts, quick wit and sheer oratorical skills. Captain Hosa was one of the very few people I know that can never be blindsided or fazed by any eventuality. His calmness and infinite optimism even in the face of life’s greatest odds are inspiring and worthy of the respect and aspiration of coming generations.

Indeed, we had a long conversation spanning varying topics and angles. Core to this conversation was his work, his vision for a greater Nigeria and his family. He shared with me how he made money at a very young age. Unlike most other billionaires that one met in the course of life’s peregrination, the very sociable and affable Captain Hosa never treated me or anyone as a minion or stranger.

Curiously, however, working even more closely with Captain Hosa in the last couple of years had further shown and convinced me that he was a very focused and driven leader, whose personal attributes were inherent, not superficial. He could be described as a ‘good headache’ because he would push and drive you while bringing out the best in you.

I would come to understand that what Captain Hosa envisioned for Nigeria drove his pursuits while his yearning for progress pitted him against the odds in the socioeconomic and political milieu.

Interestingly, one star-spangled night, as we sat over drinks and banters in his baronial London mansion, he recalled, “I must tell you that I come from a very humble background. My story is such that let me say, if I can be where I am today, anybody can be here, I mean, anybody. And it goes a long way to show that you don’t have to have been born by a rich father or mother to be successful in life.”

In his pursuit of glory, Captain Hosa learnt to thrive like a lily in unimaginable valleys. Like white rose growing on concrete slabs or the daring mushroom that pierces the motionless eternity of earth, pushing clearly but obstinately, through faint form, till the hour of fertility strikes, he sought to flourish where many had cowed to defeat. He knew quite early in life that his humble roots should inspire him to succeed rather than become a burden and impediment to his spirited strides to success. He understood that to learn even the quarter of a breeze, he must hold up a wet finger. Hence, he pursued knowledge to his advantage.

He also told me, “In my over four decades in business spanning engineering and technology, energy, integrated service in the petroleum sector, maritime, security, agriculture and others, integrity has been my guiding principle and a core value with which I have been able to earn trust and confidence of companies and corporations of global repute.

“I have never stood before any administrative, judicial or legislative panels to answer any questions related to any shady deal. I have conducted my businesses with utmost openness, honesty and integrity. I am not oblivious of the fact that not a few people look up to me as a role model; the least I can do is to exhibit exemplary leadership quality to this group of young Nigerians, many of whom interact with me on a regular basis.”

Indeed, no cowardly soul resided in the likeable billionaire businessman, because he was no trembler in the world’s storm-troubled sphere. Of course, through him, industry’s glories shine; a reality he attributed to God’s grace. Thus he was beholden to neither man nor mammon. Cowardice and doubt dispersed in the blaze of his scorching righteousness because his business and personal ethics were so firmly anchored on the steadfast rock of conscience and integrity. The renowned and revered businessman would never use gilded words to mask deceit neither did he brandish fickle principles and statistics to conclude with a false truth.

Throughout his life, Captain Hosa exuded the lustre of the proverbial leading light thus distinguishing his persona amid a range of middling men. He radiated compassion, ardour and acclaim that no life’s odd could tame. Having hacked his path to affluence in honest, industrious strides, he spread out like a bastion of human aspiration even as his exploits become objects of the world’s affection. Everywhere he navigated he exuded a spirit of humaneness and generosity that even the world’s finest and most daring philanthropists live in awe of.

No wonder he was, in 2019, bestowed with the prestigious Order of Lafayette award at the United Nations day for Global Peace. The Order of Lafayette is a patriotic, hereditary, nonpartisan, and fraternal organization established in New York City in 1958 by Colonel Hamilton Fish III (1888-1991), a former Congressman from New York and decorated veteran of the First World War.

Captain Okunbo was especially honoured for his distinguished role in encouraging, engendering and entrenching peace and harmony in Africa and the world at large. He was presented with his award by His Excellency, Robert Blum, chairman of the Order of Lafayette Awards.

Inspired by his achievements, one of my books, The Titans, was dedicated to him for profound reasons: chief among them was the rarity of his persona. He had fundamental psychology as the artist, inventor, or statesman.

He had set himself at a certain work and the work absorbed and became him. It was the expression of his personality; he lived in its growth and perfection according to his plans. Captain Hosa became worthy of the honour by the account of his sterling industry, humanity and unpretentious modesty manifested positively on all of his acquaintances.

The Captain never forgot the special occasions; he would reach out to his friends on their birthdays, Christmas, Ramadan, Sallah, Easter and some other festivities, bearing breath-taking gifts. He was a great man with a heart of gold. No doubt.

Captain Hosa was a patriot whose commitment to national and economic stability were beyond doubt thus he was one of the very few economic giants and magnates who enjoyed the respect of the Nigerian government.

I consider it a rare gift of happenstance that we got closer while he was on his sickbed in London. We exchanged Bible verses, funny memes, wisecracks, health-related advises and precautions. I encouraged him to have faith in God. We chatted extensively some days before the final call, during which he advised me to always be myself.

Captain Hosa told me, “My dear brother, I am not afraid of death. God loves me so much that he told me ahead when I will die giving me the unique opportunity to put my house in order.”

And he did put his house in order, leaving an unquantifiable bequest of good deeds and character for all his loved ones. His finest gifts were the simple and rare ones, a sense of justice by which he was enabled to appreciate merits alien to his own aesthetic, a brilliant common sense which enabled him to see clearly beyond the controversies of the moment, and a faith and adventurous valour by which he gave faith and courage to all around him.

Everyone certainly enjoyed spells of personal experiences with Captain Hosa. Here, I speak for myself: my encounter with him was intense. He made me feel that life can be lived as good poetry and that the very best that could be felt and written about anyone subsists in the true nature and tenor of his character.

The tragedy of his passage incites an enduring contempt for the grim reaper and its harrowing haste to divest this sinful world of the virtuous – men like Capt. Hosa Okunbo.

If my tribute is tardy, at least my loyalty is not. I hold him among the quiet lovers of the earth, for Captain Hosa is a down to earth embodiment of earthly love. He was dear to anyone who had the qualities of endearment, and the understanding. He had a quiet way of being genuine. His fervours, as I knew him, were chiefly for the betterment of mankind.

In setting aside his own interests, he let his deep gift of compassion go to work for the good of others. Thus he poetised humaneness as an incontestable good of the world. His life was a moving poem; a lifting lyric crafted to ennoble and enrich every aspect of his world.

Captain Hosa did something unique, thrilling, infinitely beautiful: he lived for the good of others. I can see him now walking swiftly along the lakeshore of eternity, with his brilliant eyes sparkling, urging us to pass on the bequest of his life fully lived.

Olu of Warri: What Captain Hosa Said Before His Demise