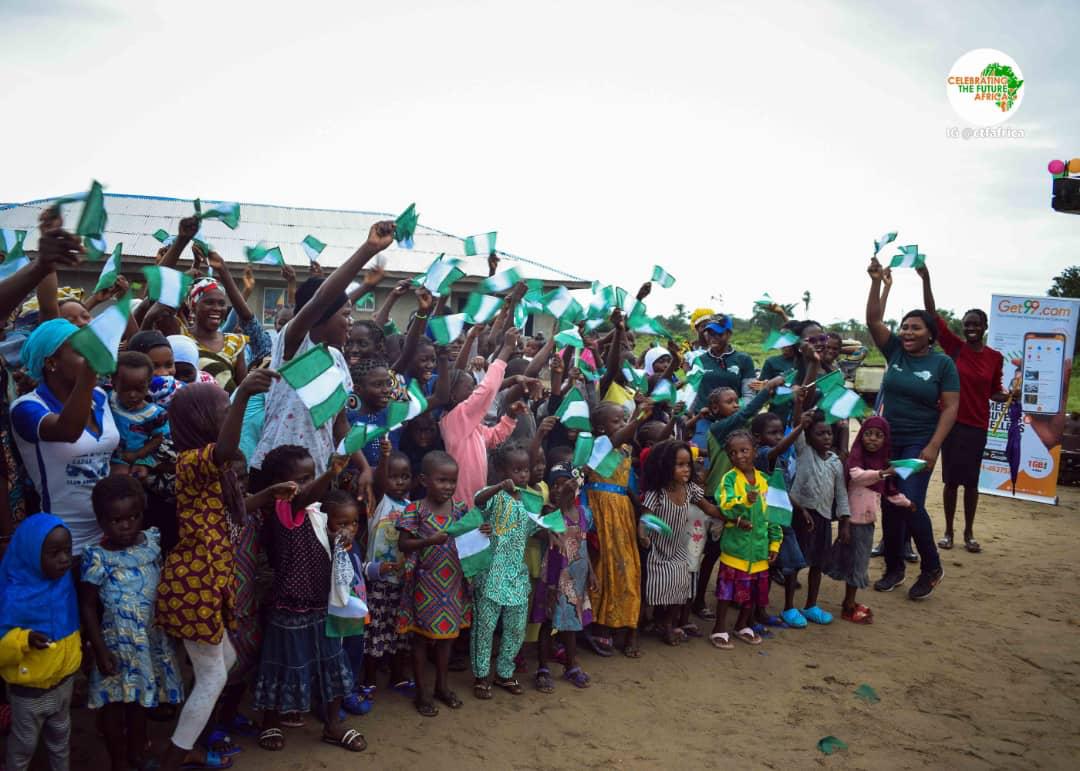 Celebrating the Future Africa (CTFAfrica), an organisation with an undying passion to ignite and discover Africa’s future joined Nigeria’s to mark its 59th anniversary of independence with its 5th Charity Tour tagged “dream tour”de

The tour was majorly sponsored by Get99.com. Get99.com is a budding online marketplace with operations in Lagos whose vision is to simplify the lives of the Nigerian people.

The convener Olumide Olagoke ,said the idea behind this innovation is to ensure that people can comfortable get all of their needs online from a secure platform.

He said CTF Africa in conjunction with Get99.com had its goal to specifically reach out to indigenes of the Ito-omu Village, just on the other side of Badore, Lagos State.

Olumide noted that the community which is built on water with boats as its only means of transportation has no proper infrastructure, medical or even the very basic educational facilities.”despite these challenges, coupled with the fact that it was raining cats and dogs on this particular day, both organisations were not deterred from delivering a project with the vision and capacity to uplift, motivate and empower these indigenes for a great future”.

Juliet Atikpekpe,a representative of Get99.com, one of the sponsor of the event start off the interesting games.

Meanwhile our achieve set goals and objectives, is the commencement of enlightening and interactive session where indigenes were comprehensively taught the significance of the Nigeria’s Independence Day and that included the necessity and importance of the celebration.

Also personal development as a key to living a successful life was discussed in depth, emphasizing the fact that they could be whatever they wanted to be despite the situation of things around them. Personal hygiene skills with the potential to come in handy to participants as a result of the current state of the community’s environmental health was also carefully taught and in addition, to reinforce the lessons on healthy living taught alongside, was the provision of free medical checks for all adults in the community.

Other activities includes; painting their canoes with the Nigeria colors, distribution of educational materials, musical performances, provision of bouncy castle and other fascinating games, many of which had the children in awe as it was the first time they had ever seen or being involved in such games.

Aside from achieving the set goals and objectives for the tour, the feedback from the community was the most inspiring for the team. We look forward to an even better tour next year, inspiring and touching more lives as our great nation celebrates its Diamond Jubilee-60 years of independence.