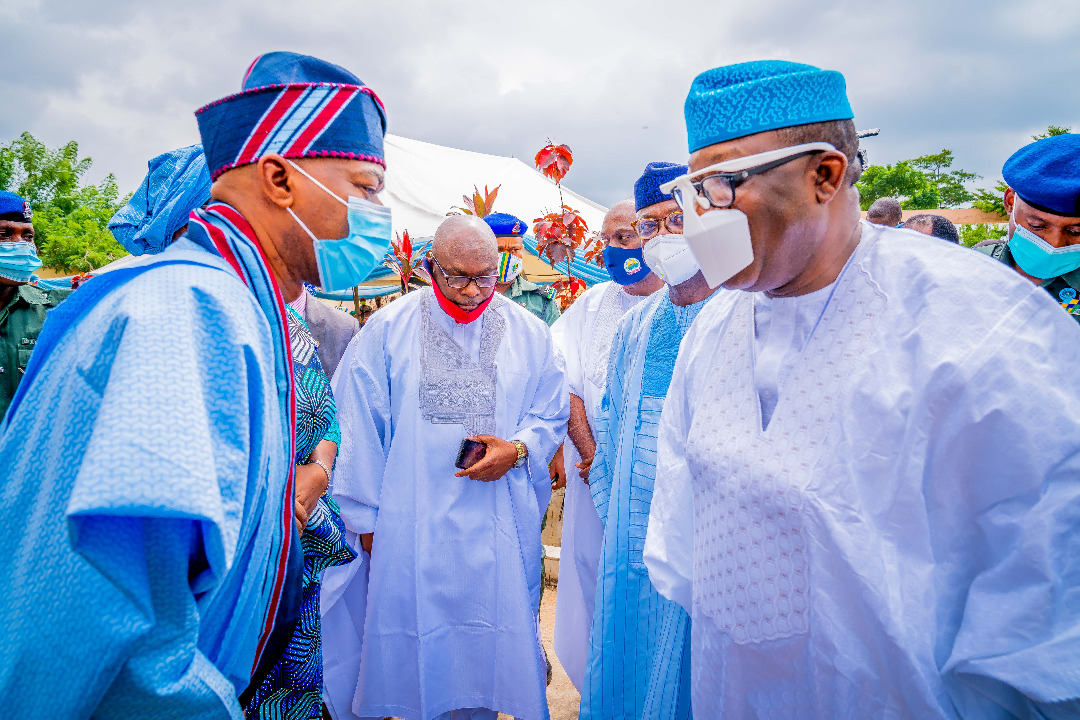 …My father was a feminist, says daughter

Nigerian leaders and people in position of authority in the country have been urged to submit themselves to God with the understanding that they would one day give account of their lives on Judgment Day.

Evang Falade, in his sermon titled “The inevitability of death”, described death as a debt that everyone must pay regardless of how long they live.
Drawing from the Book of Revelations chapter 20 verse 11-15, Evangelist Falade emphasized that every man on earth, irrespective of their status, would be judged according to the works that were written concerning them while on earth.

The Clergyman who challenged the people to emulate the late Olumilua by living a life of submission and devotion to God’s service, said the former Governor served God while in position of authority and “did all he could to please God.”
According to him: “Death is the debt everyone will pay, whether you are rich or poor, whatever you are, one day is one day. I want us to start thinking about that day.
“We should submit ourselves to God, the way he (Olumilua) submitted himself to God. When he was Governor Old Ondo State, though his tenure was very brief before the military took over, He did all he could do to please God and I want us to do the same thing because one day someone will be talking like this when you are no longer in this world.”
Speaking at the servive, Governor Fayemi, who spoke on behalf of the other governors said the greatest lesson that could be learnt from the life of the deceased was that “a good name is better than all the riches and wealth in the world” adding that “service to humanity remains the greatest service one can render and not service to self”

The Governor who said the late Olumilua’s life was worth emulation, explained that the former Governor lived a life of service, sacrifice, selfless leadership and a life of evangelical compassion to the people.
Dr Fayemi described the late Olumilua as a man of etiquette and rare virtues who never exploited his privileged position for personal gains.
He said the late Olumilua would never call him because of any contract or for money but would passionately intervene on behalf of the masses, group and communities that had come to make one request or the other from him.
He said: “a couple of days ago, I expressed from the bottom of my heart what Baba meant to us. He embraced all of us regardless of party affiliation and he scolded us, chastised us if he had to but loved us dearly as long as you love Ekiti and you are committed to service to humanity.
“Relatively speaking, he served for short term less than the two years as governor of old Ondo State but his service transformed Ondo State to what it is today.”
The first daughter of the deceased Mrs Yetunde Banjo who eulogized her late father described him as a feminist who believed in equal opportunities for both male and female.
Mrs Banjo who said her late father frowned against ostentatious lifestyle, recalled how the former Governor chastised one of his sons when he bought a Mercedes Benz car, asking why he had to spend so much on the car when he could have bought a much cheaper and functional car.
One major highlight of the colourful service was a special rendition of songs and hymns by a choir consisting mainly children of the former Governor, who were joined by renowned gospel musician, Evangelist Bola Are.
Others dignitaries at the event were: Speaker, Ondo State House of Assembly, Rt. Hon. Bamidele Oleyelogun; (who stood in for the Governor); Member House of Representatives, Hon Yemi Adaramodu; Secretary to Ekiti State Government, Mr Biodun Oyebanji, Secretary to Ondo State Government, Hon Temitayo Oluwatuyi; Head of Service, Ekiti State, Mrs Peju Babafemi, Deputy Speaker, Ekiti State House of Assembly, Hon Hakeem Jamiu.
Others are Chairman, All Progressives Congress (APC), Ekiti State, Barr Paul Omotoso; Senator Tony Adeniyi, Hon Bimbo Daramola, Hon Ife Arowosoge, Vice Chancellor, Ekiti State University, Prof Eddy Olanipekun; members Ekiti State Executive Council and members of the state House of Assembly among others.