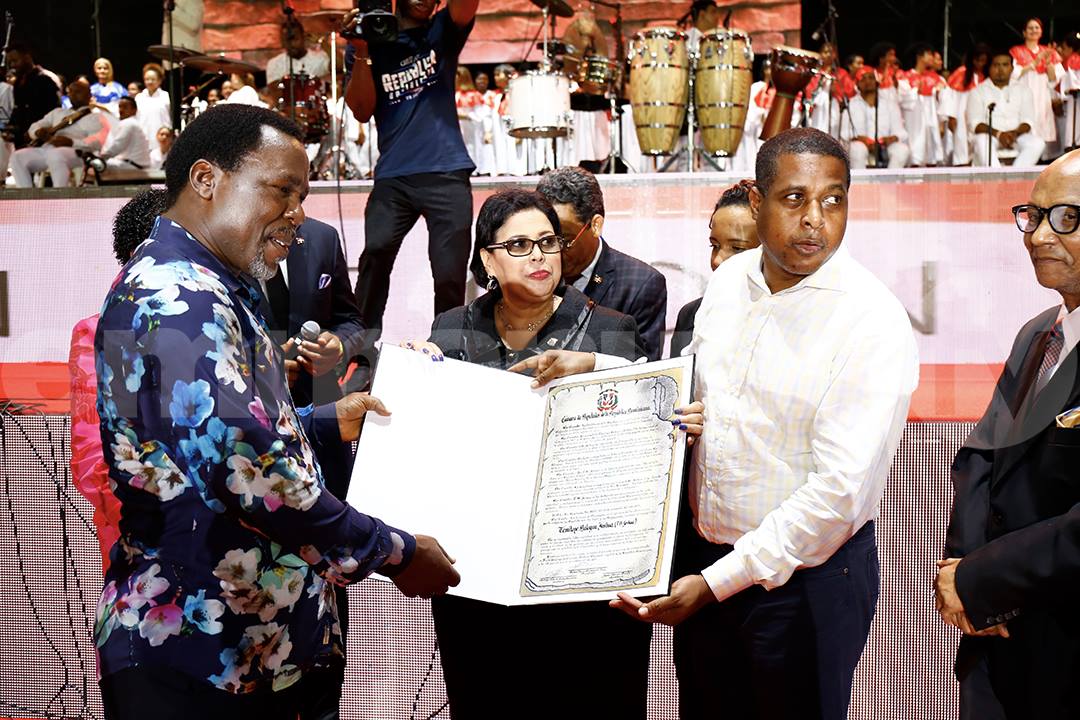 Amid a resounding ovation, the Senate of the Dominican Republic has conferred the chamber’s highest awards on the founder and spiritual head of the Synagogue Church of All Nations, Prophet Temitope Balogun Joshua.

This was made known at the end of the first session of the two-day crusade held at the Central Olympic Stadium, Felix Sanchez, located in the nation’s capital of Santo Domingo, on Friday, November 24, 2017.

While reading the letters of conferment of the Senate and Congress awards, the event had in attendance representatives of the governments of Russia, Spain, Brazil, Paraguay, Haiti, among others.

The Senate argued, among other things, that it reached the resolution of the conferment of the award on the cleric considering Prophet Joshua’s immense contributions to the growth and development of humanity, his wonderful and relentless social work which he had tirelessly extended to impoverished regions of the world, his large donations to help widows, orphans, the destitute, the elderly and the physically challenged. Chief among the mention of the Senate was the humanitarian work spearheaded by the prophet after the 2010 Haiti earthquake, including supports to India, Ghana and the Philippines following various disasters.

The Senate further extolled the unrelenting commitment of the cleric in engendering global peace and therefore made him the spiritual guide of the nation.

While accepting the award in the company of his wife, Prophet Joshua thanked the government and people of the Dominican Republic for such recognition promising that he would continue to pray for the country while also making it his second home.

“I am very delighted. I am also very grateful to the government and people of the Dominican Republic. I dedicate this award to the people of this country. I will continue to pray for you and I will ensure that this country is my second home,” the cleric said.

Earlier, the crusade venue witnessed a mammoth crowd of worshippers, government officials, politicians and the entire strata of the human society. Many had travelled far and wide to hear the cleric preach and pray for the sick and other miracle-seekers.

The crowd had continued to swell with over 60,000 participants in attendance. Despite the human traffic, no untoward incident occurred.

In his message, Prophet Joshua, taking his text from Romans 5:2 of the Holy Bible, called on his immediate and virtual listeners, to ensure that they sought the kingdom of God first while also seeking the happiness and joy of their neighbours.

“We live in a world where people measure their happiness with material possession. But this is not so. You must measure your happiness by ensuring the happiness of others. This is the example that Jesus Christ has set for us. You can bless others with your smile, your money, your material possession or even other things. Put a smile on people’s faces and you will be glad,” he said.

During the prayer session, many who had various ailments and had travelled both far and wide were attended to by the cleric who laid his hands on them “in the name of Jesus”.

Atiku in Secret Talks With PDP Over Presidential Run