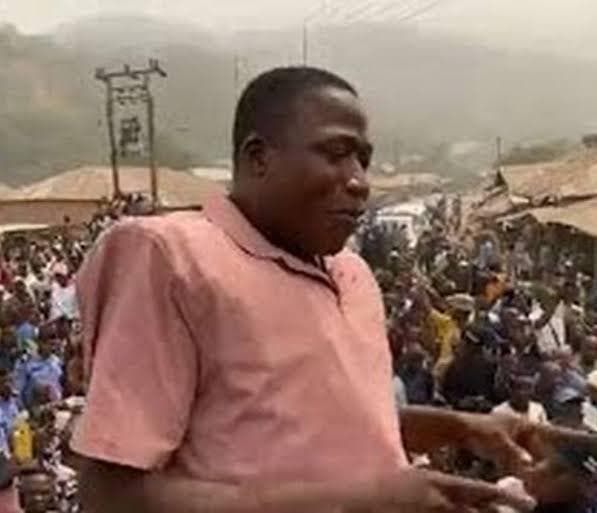 Reportedly, the Federal Government has said Yoruba Nation activist, Sunday Adeyemo, aka Sunday Igboho, is trying to acquire a new passport to flee the country.

It added that the government had placed Igboho on the stop-list in order to facilitate his arrest and directed the security agencies to apprehend him anywhere he is found.

In the security circle, a person whose name is on the stop-list is denied all constitutional rights and privileges a citizen is entitled to.

The Federal Government’s directive against Igboho was contained in a letter by the Nigeria Immigration Service dated July 9, 2021, addressed to the Director General, Department of State Services, the Inspector General of Police and the DG, National Intelligence Agency.

The activist, a spearhead of the separatist agitation for the Yoruba Nation, had been declared wanted by the Department of State Services on allegations of stockpiling arms to destabilise the country, which he has since denied, but his whereabouts remain unknown.

The whereabouts of Igboho, a lead figure in the separatist agitation for the Yoruba Nation, has been unknown since he narrowly escaped arrest during the July 1 midnight raid by the secret police, ahead of a major rally in support of the call for Yoruba Nation in Lagos.

Following the bloody raid on Igboho’s Sooka residence, the DSS arrested and detained 13 of Igboho’s associates, adding that during a “gun duel,” it had killed two of Igboho’s supporters later identified as Adogan and Alfa.

The petition was filed against the President, Major General Muhammadu Buhari (retd); the Attorney General of the Federation and Minister of Justice, Abubakar Malami, SAN; former Chief of Army Staff, Tukur Buratai; and former Inspectors General of Police, Ibrahim Idris and Muhammed Adamu.

They accused the Nigerian leaders and security chiefs of genocide and crimes against humanity against the Yoruba people of Ekiti, Oyo, Osun, Ondo, Ogun, Okun Land in Kogi, and Kwara states.

The letter titled ‘Stop-listing of person: Adeyemo Sunday Adeniyi (aka Sunday Igboho), male, Nigerian, passport number A11613637, date of birth 10/10/1972’ was copied to all zonal controllers and control posts Nationwide.

It read, “I am directed to request that you kindly place the above-named person on stop-list. Credible intelligence revealed that Adeyemo is making efforts to obtain a police extract and/or court affidavit to enable him to acquire a new Nigerian passport, apparently to facilitate his escape out of the country.

“In addition, he should be arrested wherever and whenever sighted and referred to the Director-General, Department of State Services vide letter no: S.605/A/246 dated 05 July 2021.”

The NIS spokesman, Amos Okpu, however, said he was not aware of the letter. He added that he had no update on the manhunt for Igboho.

He said, “I’m not aware of the letter. Has Ighoho been declared wanted? Well, I don’t have any information on him.”

The DSS spokesman, Peter Afunanya, has yet to respond to inquiries on the issue as at press time.

Following the raid on Igboho’s Sooka residence on July 1, Afunaya told journalists in Abuja that the raid was carried out based on an intelligence report that Igboho had stockpiled arms in his residence.

He explained that Igboho and his group, in the guise of the campaign for self-determination,  had become well-armed and determined to undermine public order.

Others were three charm jackets/traditional body armour, two laptops, one Toshiba and one Compaq laptop, Igboho’s passport, and those of his aides.

Afunaya claimed that five of the AK-47 rifles recovered from Igboho’s residence were snatched from the Nigeria Customs and Immigration personnel at Idi-Iroko, Ogun State.

Related Topics:FeaturedSunday igboho
Up Next

TB JOSHUA: THERE IS NO SUCCESSION TUSSLE AT THE SCOAN