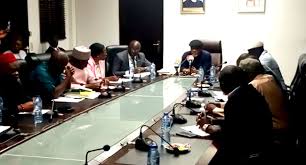 The Federal government of Nigeria and the labour congress would continue talks on Wednesday 16 of October, 2019; over the adjustment in minimum wage of workers and its implementation on the Nigerian workers. Saharaweeklyng.com reports

The negotiation process ended in a deadlock on the previous day, Tuesday in Abuja, where both the Government and labour has been in argument over the matter.

Rotimi Asugwuni, who is the leader of the labour team said deliberations will continue on Wednesday to smoothen all necessary edges concerning the matter.  He said that the Federal government hasn’t shown too much commitment towards the issue.

Earlier in April 2019, President Muhammadu Buhari had earlier approved and signed into law the bill of the minimum wage.