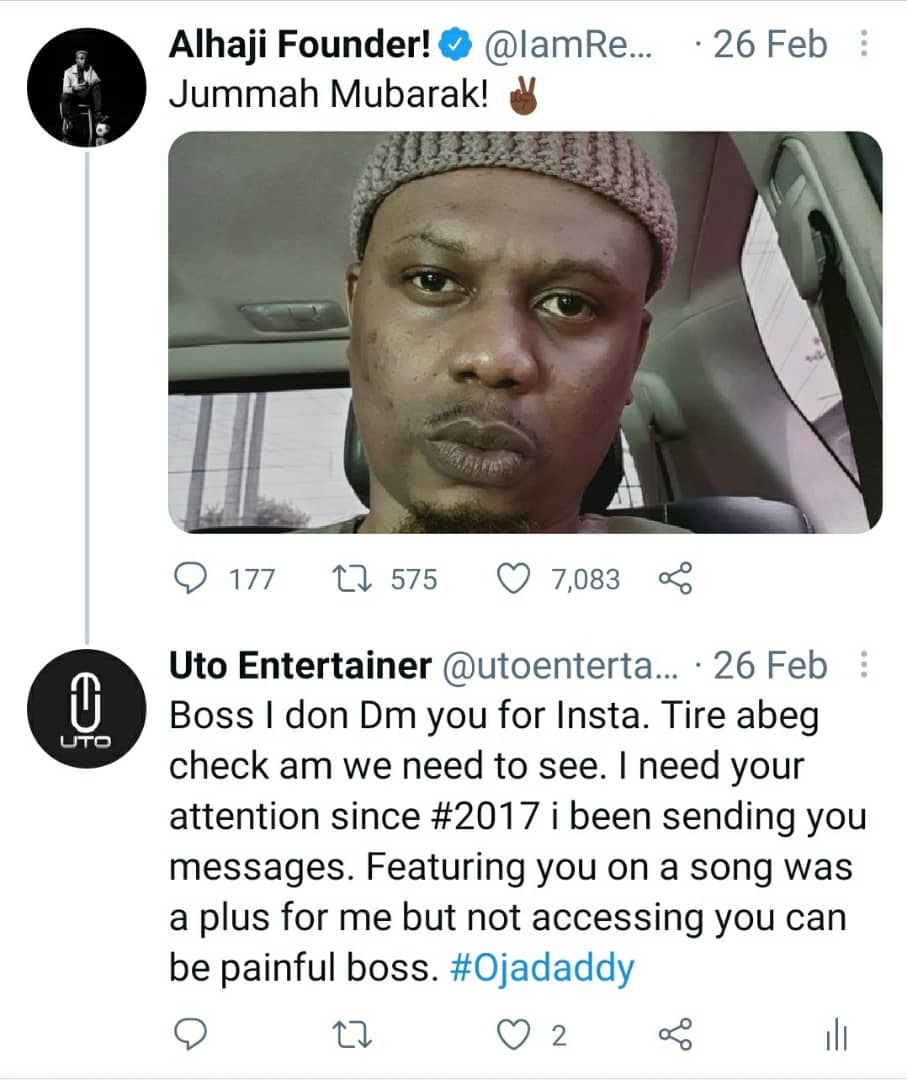 TRIXX NG Reports that a fast rising artiste, Uto Entertainer has called out popular rapper, Reminisce after he ignored him for many years.

The fast rising acts made it known that he has been following and texting reminisce since 2017 yet he hasn’t given him any attention.

Although, the artiste has taken this in good faith while hoping that someday, He will get the deserved attention, He has penned down some things he feels are the challenges of upcoming artistes

‘It is easy to lose focus as a struggling artist because of the frustration that sets in when you fail to rise to stardom as quickly as you predicted. You need your head in the game hence why it is vital to stay focus. Making it big in the music industry goes beyond just your talent because the industry is saturated with enough talents. What makes Mr A bigger than Mr B goes beyond just having a good voice and the ability to churn out hits. Is your focus also on the business aspect of things, what is your presentation (are you ‘brandable and marketable’?), what sacrifices do you make to get to the top, how do you present yourself, do people like your attitude and energy? Don’t tell me your answer, reflect on it and tell yourself the truth.

Money is important! Being an up and coming artist is not a job, you need to get an actual job that can pay your bills. You need money to make money because just as I mentioned above, talent may sometimes not be enough to give you that big break. Ask record labels how much they have to spend to push an artist into visibility. Money also buys your music some quality. Don’t offend our eardrums by wasting a good song on a wacky beat produced in a 2inch studio. With enough cash, you can have the services of a talented or reputable producer and put together your song. When you do finally make it big, it would have been a good investment.

As an up and coming artist, you may not realise it but your public image matters. Publicity is key for you at this stage of your career and while you may not have money for certain media attention, don’t forget you have your SOCIAL MEDIA. Social media has made stars of some of the celebrities you look up to so be deliberate with your use of social media.’’

Is Primate Ayodele’s Prophecy On Benin Republic Coming To Pass?