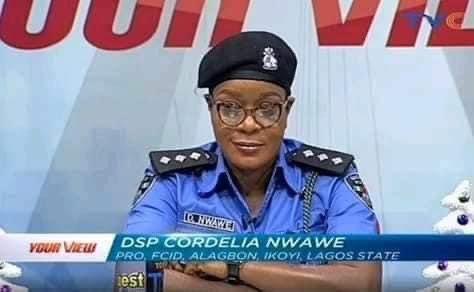 Deputy Superintendent of Police,DSP Cordelia Nwawe with her team was said to be involved in the extortion of Twenty-Two Million Naira worth of Bitcoin from two young Nigerians, Morakinyo Tobiloba Peter and Yusuf Samson Dayo at gunpoint on July 14, 2021 while driving along the Ikoyi/Ajah Expressway, Lagos State

Our correspondent learnt that DSP Cordelia with her team allegedly indicted in the report, have been ordered to report to the Special Investigation Panel immediately at Force Headquarters, Abuja, on Tuesday, 21st December, 2021

A Special Investigating panel have been set up by the Inspector General of Police, IGP Usman Alkali Baba to carryout a proper investigation on the allegation.

Force Spokesperson, CP Frank Mba in a statement has also advised any member of the public who has had similar experiences of high-handedness or extortion by the officers in question, her team or any other officer at the FCID Alagbon to come forward with detailed information to enable the panel achieve a wholistic investigation.

The Special Investigation Panel is headed by Deputy Commissioner of Police, Olaolu Adegbite, MFR, of the Force Intelligence Bureau (FIB).