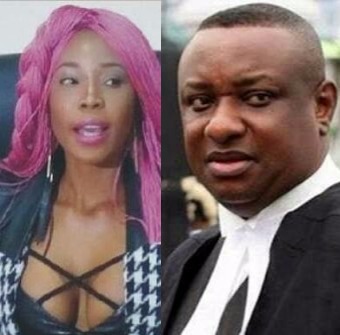 In a bizzare marriage of absurd twists and deliberate unethical legal practices, the scandal involving a Canada-based stripper and aspiring musician, Stephanie Otobo and Apostle Johnson Suleiman of Omega Fire Ministries, Auchi, sprung more surprises as the lady’s lawyer, Festus Keyamo has filed a plea to relinquish his position as counsel to Miss Otobo in court.

It appears that the controversial lawyer has been given a black eye by his client as he said in his application that recent events, including his client’s confession at OFM and her subsequent refusal to play to her alleged “sponsors” script have made their continued partnership “untenable”.
Keyamo also finally confessed in his plea that he has never known the address of Stephanie Otobo, a client he has been working for, since 2017. This confession by a lawyer of Keyamo’s standing has left many Nigerians wondering why he created the impression of closeness and care for his supposed client all these months.
In what seems to be a killer punch, Stephanie Otobo has deposed to an affidavit distancing herself from another affidavit earlier made public by Festus Keyamo, in which she was claimed to be asking the court to examine the genitals of the Apostle via forensics.
According to the new affidavit signed by Otobo, her lawyer (Festus Keyamo) deceived her by giving her a “bundle of documents” to sign, telling her that it was just papers to allow the police release her phone which was in custody at the time. Unknown to her, the lawyer refused to let her read the document because it was a scheme to submit the so-called request for forensic examination against the preacher, a move that blindsided the young lady. She has accused Keyamo of dishonesty and told the court that her alleged sex affair with the Apostle never happened.
She also reaffirmed her earlier confession that she was used by “some powerful politicians and pastors who only wanted to pull down the Man of God”.
To find peace of mind and move on with her life, Miss Otobo said she had confessed in order to find forgiveness as her conscience had been troubled all through the saga. She also appealed to all stakeholders to let her move on with her young life so she can find her purpose for living.
The revelations in this affidavit brought before the Ikeja high court and the subsequent application by Keyamo to withdraw as counsel to Miss Otobo has exposed the unethical behavior of lawyers in their quest to win cases, pull people down, deceive even their own clients, and distort facts in order to subvert justice. But it is more diminishing when it is a lawyer of Keyamo’s repute that is caught indulging in such unwholesome practices.
The Apostle has vowed through his counsel to report the lawyer to the appropriate authorities including the Legal Practitioners Disciplinary Committee. He is said to be very bitter about the manner Keyamo handled this saga and the deliberate manipulation of facts to defame his character.
Related Topics:Apostle SulemanFestus keyamoStephanie otobo
Up Next