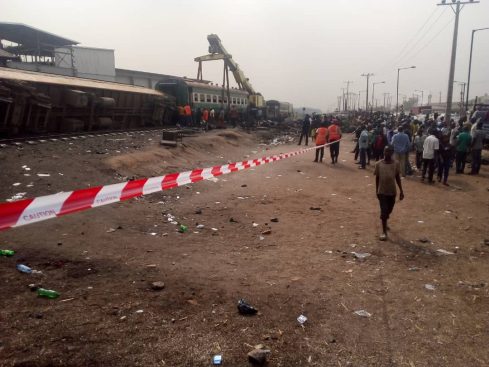 An Ogun State bound train, Tuesday morning allegedly crushed five persons including a tricyclist after the tricycle veered into its tracks.   The passenger train which was on its way to Ogun State rammed into a tricycle killing all on-board in the process.

It was learnt that the train had left the station at Oke Aro and was heading to Itoki in Ogun State when the tragedy occurred.   Our correspondent learnt that incident occurred at Toyin, a suburb between Agbado Crossing and Iju Ishaga Station in Lagos state.

According to eyewitness account, as the train approached, motorists and pedestrians alike stopped to give him the right of way.

However, the tricyclist who tried to make a last-minute dash across the tracks, was crushed alongside his passengers.   After the train passed, the mangled remains of the occupants and the carcass of the tricycle splattered on the tracks.

Related Topics:coverstoryIJU RAILWAY
Up Next