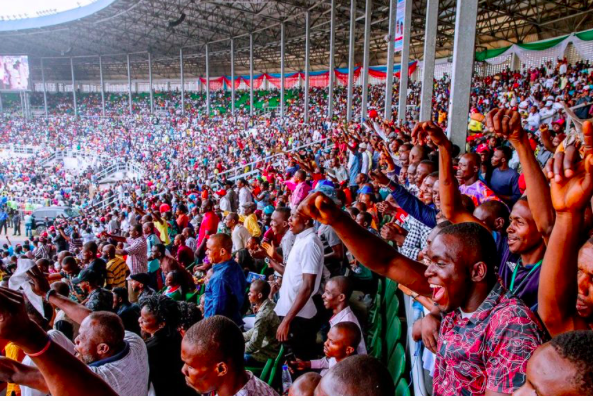 Four persons reportedly died in a stampede during the All Progressives Congress (APC) presidential campaign rally in Port Harcourt, Rivers state, on Tuesday.

Sources said gates of Adokiye Amiesimaka stadium where the event held were locked on arrival of President Muhammadu Buhari and people who tried to exit were trampled upon.

Some of the people who sustained injuries at the stadium have been evacuated and taken to the hospital for treatment.

On Thursday, at least two persons were killed during the party’s presidential rally in Jalingo, Taraba capital.

Garba Shehu, presidential spokesman, who confirmed the incident, said the deaths were caused by overcrowding at the Jolly Nyame stadium where the rally held.

In a statement, Buhari expressed sadness over the incident,  saying he wished they were alive to “witness the dividends of purposeful governance” if and when he is re-elected.

“I always feel very sad and distressed when ordinary Nigerians who love me and our party because of what we stand for and have done, make personal sacrifices by taking the pains to show their support, end their lives tragically,” Buhari had said.

There is no official information yet over the Port Harcourt incident.