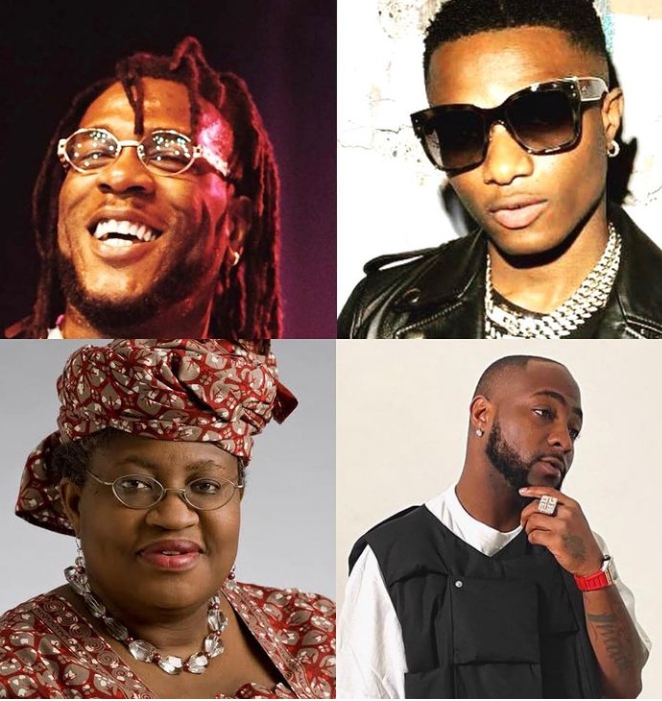 Interestingly, four Nigerians have made us proud this year and have established our relevance as a Nation on the world map.

Arguably, Ngozi Okonjo Iweala, Davido, Wizkid and Burna Boy have used their influence,craft and appointments to showcase the brighter side of this country.

History was made when the General Council of WTO agreed by consensus to select Ngozi Okonjo-Iweala as the organisation’s seventh Director-General. She became the first woman and the first African to be chosen as DG.

After 10 years of crafting a sturdy music career, multi-award winning singer, DAvid Adeleke widely known as Davido made his international debut appearance into Hollywood with a cameo appearance in the sequel to the popular Hollywood comedy classic, Coming to America.Davido,28, performed his song Assurance in a scene of the movie as Eddie Murphy reprises his iconic role as Prince Hakeem in the long awaited sequel. And of a truth, the news broke the social media as Davido truly made us proud.

And Just few hours ago, Nigerian Afrobeat stars, Burna Boy and Wizkid both etched our Country’s name on the world map at the 2021 Grammys. Burna Boy won the Best Global Music Album category while izkid won the best Music Video for his song with Beyonce; Brown Skin Girl, from Lion King: The Gift album.

10 snubs and surprises Of OSCAR Nominations 2021