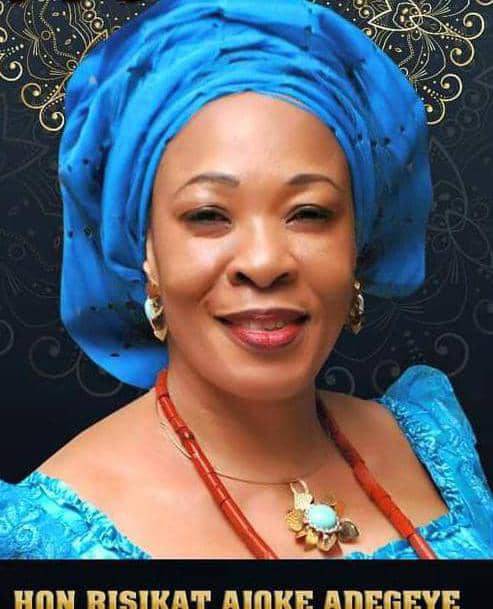 It was an evening of mixed emotions and sober reflection as Lagosians from various walks of life gathered in a service of songs on Tuesday in Lagos to bid Nigeria’s foremost Former Lagos state house of Assembly Hon.Chief Mrs Risikat Ajoke Adegeye farewell.

The event which took place in the Luxury Party Event Centre Agidingbi,Ikeja, Lagos.

Venerable A.I. Omidiji ,the Officating Minister of Christ Church Anglican, Amuwo – Odofin ,Lagos, described the late Politician as a faithful and prayerful mother who leaves exemplary life and have the hearts of youths in her mind.

He reminded all Nigerians especially Christians to always be humble and accommodate anyone because one day death is sure,but nowadays people surrounded themselves with kinds of powers but earth is not a permanent place for all of us.

According to him, “ i will charge individual to prepare themselves because heaven is for those that prepared. Let us leaves a faithful life and embrace Christ every body will depart the world but what matter is the legacy each and everyone will be remember of.

Omidiji,through his Bible passage advised individual to aspects Christ as personal saviour because what will profit a man to gain the whole world but losses his soul Mark 8 vs 36.

In their testimonies,which was in four categories, the members of Lagos state house of Assembly, the Church, her constituency, and residents were all present and many others spoke about the former late member of the house.

The Late Hon.Chief Mrs Risikat Ajoke Adegeye son, Mr. George Folarin Olawande Adegeye while describing his mother said no words can describe the feeling when I realized that you are no more.

George said ,It is a feeling like no other. No one can really understand the pain I am going through in life without such an important part of you. To the world, you were just one person but to me,you were the world. The joy of being your son is a life long one;memory I will cherish for a life time. You were my angel,best friend and confidant. Your smile gives me assurance in times of uncertainty, it will be difficult to express how I will miss you in few words because you were a mother by all definition.

“My heart aches to know that you are no more but I take solace in knowing that you are resting in the Lord’s blossom,he said.

She would always be remembered by the young politician in Amuwo-Odofin constituency who have parted positively 75% of them have gone to abroad for training and as one person who helped to change the narrative of those in power who did not have the youth in their mind.