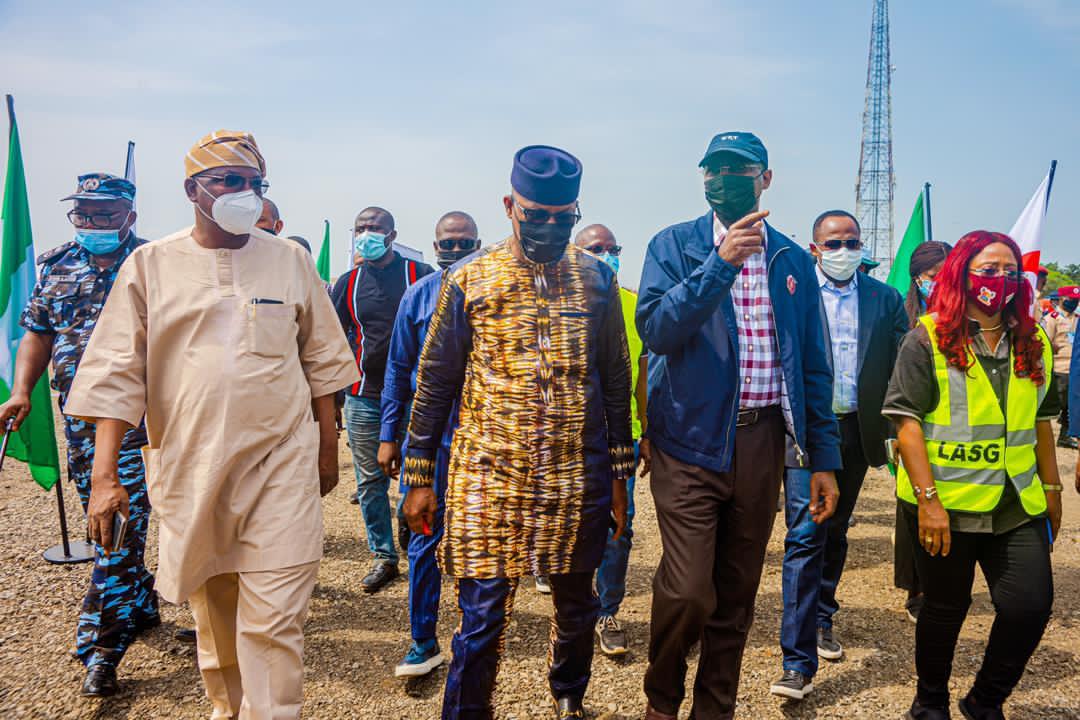 Ogun State Governor, Prince Dapo Abiodun has appealed to the Federal Government to give special consideration to roads in the State has it plays host to the largest industrial hub in the country. Governor Abiodun who made the appeal at the Stakeholders Town Hall Meeting attended by the Minister of Works and Housing, Mr. Babatunde Fashola, at the Ogere end of the Lagos-Ibadan Expressway, said roads in the State have become deplorable due to activities of heavy duty trucks. “It is just right to say that Ogun State deserves a special status in terms of consideration for road constructions.
I believe this is doable. It is not just for Ogun State, it is for the common good of all Nigerians and continued development of our great nation” he noted.

He said most part of the Lagos-Ibadan Expressway, the longest road that leads to busiest Air and Sea Port in the country, is in the State and has over time deteriorated and become a nightmare to motorists and other road users. “We are particularly delighted that the Lagos-Ibadan Expressway is receiving Federal Governments attention.
Indeed, in the last two or three weeks, this road has been a nightmare. At certain points, I have had to personally intervene by directing traffic. While appreciating the Federal Government for constructing the road, Governor Abiodun whoever pointed out ecological challenges facing the State as a result of the mining activities by the construction company, calling for more supervision in the issuing of mining licence to serve the environment.

The Governor informed that his administration has commence the construction of the Ijebu-Epe road, while appeal has been made to the Federal Government for the take over of the Lagos-Sango-Abeokuta road to take the load off the Lagos-Ibadan road as well as the 19.8km Atan-Lusada-Agbara, which play host to multinational and domestic industries.

Prince Abiodun who also pointed out the bad condition of the Sagamu-Ogijo-Ikorodu road, said though the state has done Palliatives on some of the roads, these could not be enough as total reconstruction was needed for durability.

He said two fire stations would be built at Isheri and Mowe, to respond to fire emergencies, while a trailer park would be sited at Sagamu to provide alternative to Ogere axis

Speaking, the Minister of Works and Housing, Mr. Babatunde Fashola, ordered tanker and trailer drivers to move their vehicles out of the road, as pouring of used petroleum products was capable of destroying the roads.

He said the Lagos-Ibadan Expressway constructed in 1974 and Completed in 1978 was to promote north- south commercial activities, calling on the Federal Road Safety Commission to enforce road regulations, as government could not afford its road destroyed by people who are carrying out their private businesses.

READ  EKITI CONTINUES GRADUAL PAYMENT OF GRATUITY …..As Fayemi promises not to renege on pledge

While assuring that the Federal government would work with Ogun State to address the environment challenges posed by the road construction, the Minister noted that the Federal Government has heard request of the State on other roads and attention would be given as funds are available.

The Akarigbo of Remoland, Oba Babatunde Ajayi, represented by the Elegbe of Egbe, Oba Adewale Osibaru, called for the siting of Fire station in the area, while attention should be given to the Sagamu-Ogijo-Ikorodu road. The Alaye Ode, Oba Tunde Osho, appealed for construction of pedestrian bridge in the area and rehabilitation of township roads damage as the result of traffic diversion from the Expressway.

The representatives of the Hausa, Igbo commumities and the Civil Society Organization, made contributions on how to end the gridlock synonymous with the Ogere axis of the State.

Nigeria slips into recession Due To COVID-19,Oil Prices?