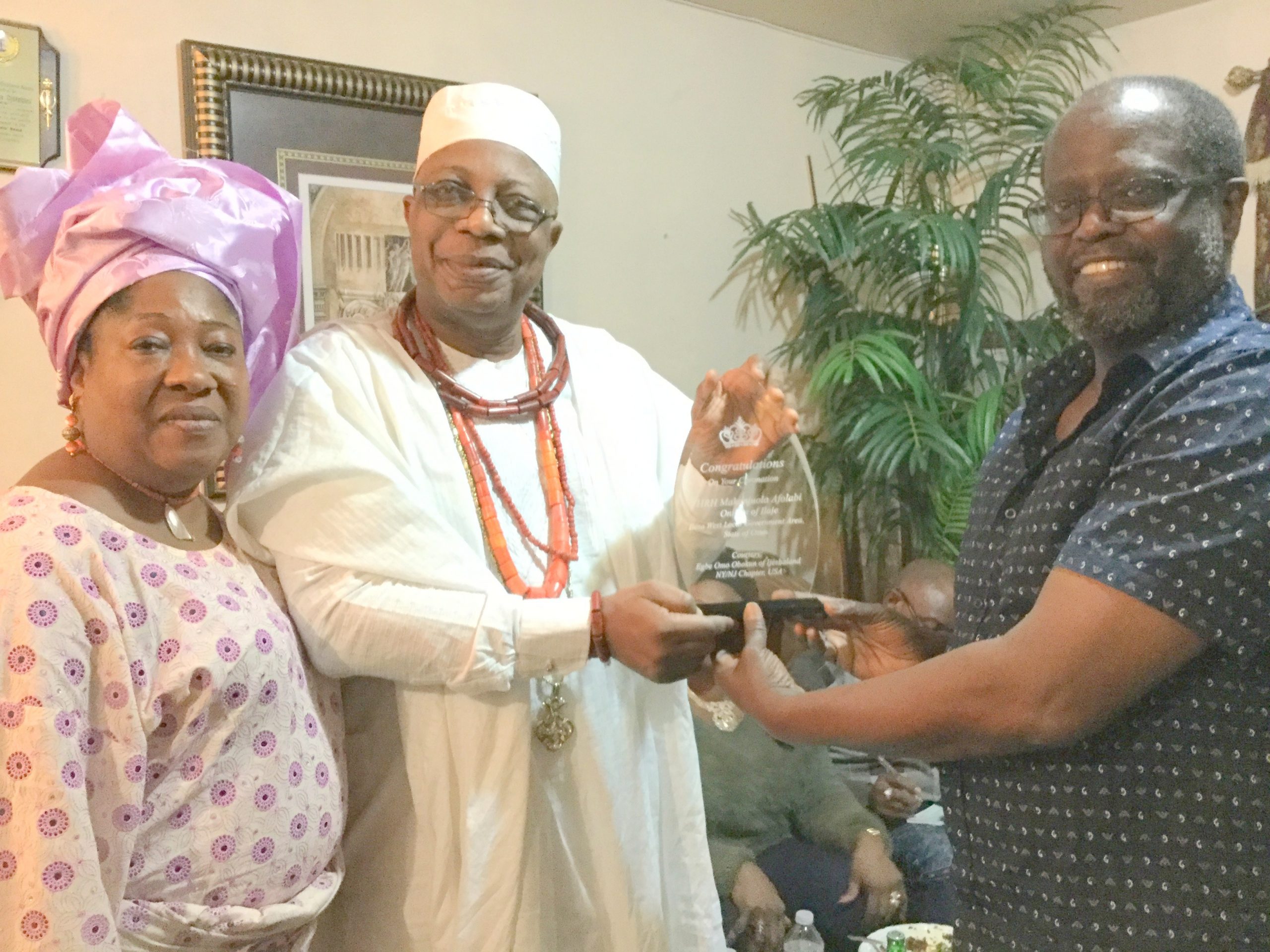 Indigenes of Egbe Omo Obokun of Ijeshaland, New York/New Jersey chapter, USA, over the weekend honour Oba Makanjuola Aremu Afolabi, the Onilaje of Ilaje, Osun State, Nigeria with an award of honour a rapid development in the community.

Egbe Omo Obokun of Ijeshaland, is the Umbrella organization for associations formed by indigenes of Ijesha Descendants residing in New York and New Jersey. The idea for the association was conceived to help and support every sons and daughters of Ijeshaland in Diaspora.

Chief Ggbenga Ojofeitimi, President of Egbe Omo Obokun of Ijeshaland, New York/New Jersey chapter, speaking while presenting the award thanked Oba Afolabi, who also was a member of the association during his stay in the United States of America, thanked the traditional ruler for a focused assignment in the community and people-oriented programmes carried out in less than three months of his coronation as the Onilaje of Ilaje, Osun State.

Ojofeiyitimi, urged the traditional not to relent in efforts to bring the community into the limelight and continue in poverty alleviating programme.

The President, however, promised to supply blood pressure machines to the Ilaje health centres.

In his acceptance speech, Oba Makanjuola Aremu Afolabi, the Onilaje of Ilaje, Osun State, thanked the Egbe Omo Obokun of Ijeshaland, New York/New Jersey chapter for the honour and promised to carry on his developmental programmes for the community.

Oba Afolabi, who was crowned the Onilaje of Ilaje in November 2019 after his decision to return to Nigeria after staying over 21years in America as a Real Estate expert said he was worrisome for him when he realized that the town does not a police post, standard medical facility, and palace for the traditional ruler.

Owing to a high level of insecurity in Nigeria today, Oba Afolabi, said he has achieved siting of a police post to the community under two months of his reign.

The traditional ruler however, called on Egbe Omo Obokun of Ijeshaland to support in the development process in the community especially, provision of drugs to the existing medical facility in the community.

Similarly, he challenged every member of Egbe Omo Obokun of Ijeshaland and all Nigerians in diaspora not to put all their investment in a foreign country rather prepare for their retirement in their respective country of origin.