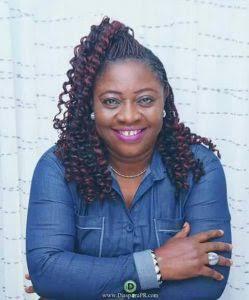 The Peoples Democratic Party’s candidate for the House of Representatives election in Ajetomi-Ifelodun Federal Constituency, Lagos State, Rita Orji, has told INEC to declared her winner of April 15 election.

Hon Rita who emerges with highest margin of votes has insited that she won in the re-scheduled February 23, 2019 Presidential and National Assembly poll .

She expressed readiness to approach the court to call for an injunction and the release of electoral materials used during the election. She made the remarks while reacting to a media report published in one of the National Dailies where it was claimed that the election has been declared inconclusive.

Orji, while dismissing the newspaper report, maintained, “We hope to clear this assumption which isn’t from us that the lead from the result sheets we had from polling units from all wards stamped by INEC and signed by party agents showed a clear lead with high margin and this is after alterations have been done in various wards and polling units. Yet,the candidate of the PDP, Orji still won with such margin. (Evidence are available from result sheets issued our party agents on the field).

However, “it was said that my opponent and candidate of ruling All Progressives Congress, APC, Kolawole Taiwo, a three-term member of Lagos State House of Assembly, claims there are still over 43,000 votes yet to be counted before the collation was stopped. This claim we find malicious and preposterous. “There isn’t any evidence to back this up. Can he provide the polling units and ward that makes up this 43,000 votes they claim or where was it gotten from? Also if they say elections were stopped and that outrageous figures were not counted, why wasn’t the counting continued if that were to be the case as alleged by them? (Rivers is a clear case of an election count been stopped and continued at a set date.

Also if i may ask, were elections not held for senate and president on the same day and time? Why weren’t those other elections declared inconclusive and result produced for these same places they claimed a rerun should be held? Lies tarry for a while, let him provide the units and then we will respond with the results, they must make sure that electoral materials are intact to prove the winner not assumptions.

We find the report alarming to say that the commission had called for a stakeholders’ meeting in the area to determine whether a supplementary election should be conducted or the remaining result be declared. “Who are the said stakeholders? Is this in any way according to the electoral act? How can the commission ask that and where did they get such information? We didn’t get any invitation of such. “Now the glaring fact from this statement shows that there are already declared results and the rest is in their possession and been withheld from been declaring.

We wish to ask the following questions, on what ground was the election declared inconclusive? Weren’t result issues for those wards that were withheld by the electoral officer. Why weren’t they declared? “It shows that the conduct of those in charge of the election held on the 23rd of February 2019 were in clear violation of what the Electoral Act 2010 stipulates and also shows some form of conspiracy between the ruling party and INEC.

The court ruling and judgment given by the High Court in Abuja mandating INEC to declare the result is a clear vindication upon the presentation of evidence as regards this case and we hope they carry out this verdict and in good fate. “We are ready to head to the court to call for an injunction and the release of electoral materials used during the election for our analysis and perusal in making our case if the need to prove that we won the election and was the clear choice of the people.

The election in Ajeromi-Ifelodun was heavily monitored and we are ready with any evidence needed. We are not in for propaganda, they should provide facts and figure to their claims and declare the results polling units by polling units and announce the winner as directed by the court

﻿May the Blood of Christ not Flow in Vain By Engr. Akinbola Fatiregun