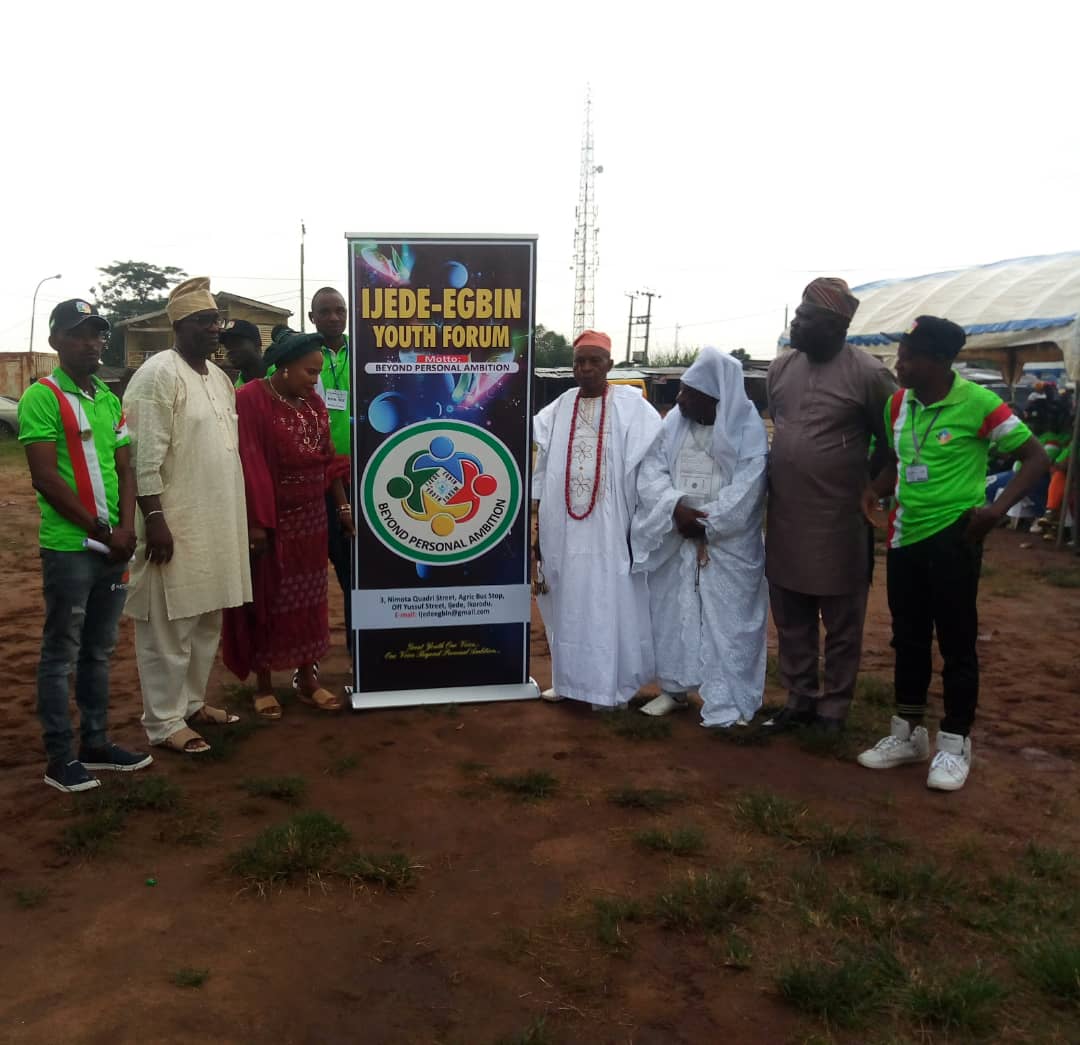 The Ijede Egbin youth forum has listed their achievement since the group came on board three years ago.

The youth forum was set up exactly three years ago with the intent of giving the youths in Ijede LCDA a voice, with initiatives and programmes that mobilize, unite and reorientate.

In his speech, the coordinator, Prince Olumide Musediq acknowledged the achievements of the forum which he said would not have been possible without the Almighty Allah.

“Initially, it was a little tough because of the misconception about the group that gave the wrong impression which made some stakeholders reject the concept while some gave considered it and gave the required support.

“As a group that is committed to adding values to lives, we were motivated with the support to forge ahead.

“The battle ensued when we took up the challenge of getting our community regular supply, adequate and justifiable electricity bills.

Sincerely it was tougher than what we presumed, but our spirit drives us to withstand the challenge”.

Musediq said they understood that security is everybody’s business so they embarked on a constant discussion on how to reduce crime if not totally eradicated.

“This is one of our areas of concentration, we have been partnering with security agencies by giving necessary support to the institutions, Baales and other authorities in the land to make sure that our community is crime-free.

“Secondly, we took up the challenge of getting our community a steady and regular supply of electricity, adequate and justifiable bills.

” The host communities Ijede, Egbin and Ipakan and all environs were in total darkness which crippled all businesses and discouraged investors.

“After a series of letters and unyielding meetings, our research informed us of the possibility of getting direct supply from Transmission Company of Nigeria (TCN) at Egbin Terminal to save Ijede LCDA from torment of electricity provider.

“We were also made to understand that there is a 100mva transformer that was primarily brought to power the host communities but lying obsolete at TCN Egbin.

“We took it up by writing the appropriate quarters to this effect but we were made to understand why the 100mva transformer need to be replaced for 300mva”.

He added that having considered the reasons by the concerned authorities, the community agreed to receive the 300mva, to the glory of God the transformer was energized to powered Ijede LCDA in March.

“This we protested against the day it was energized so, that brought the royal institutions in Ijede LCDA together to speak with one voice for the first time in several years”.

Continuing with the group’s achievements, Musediq said their “catch them young programme” that is targeted at their young ones especially students at different levels had yielded the desired result.

“The concept is to make them understand the negativity in crime which systemically discourages them from joining any evil gang that will destroy them.

“Also, our seasonal skill acquisition training programmes, legitimate online business and empowerment training are other ways that had gotten the youths engaged.

“There is an ongoing discussion with some companies for sponsorship on the project to enable them to get more sophisticated equipment”.

Musediq used the opportunity to thank the current executive governor of Lagos state Mr Babajide Sanwo Olu for the just concluded and commissioned phase(1) one of Ijede road with efforts of the immediate past chairman of Ijede LCDA.

Barr. Taiwo Junaid, the chairman of Elder’s Advisory Council said that the forum was inaugurated to serve as advisors that will guide the youth on the part of legality.

Taiwo explained that their duty is to make sure that the youth is guided so that whatever they would be doing will be legal and reasonable.

He pointed out that one of the major problems in the community before the youth set up the forum was the issue of electricity bills which used to be outrageous.

“But since the youth came on board by the grace of God, things have taken the due process.

“We are peacemakers, we do not want to take what belong to us by violence that is why we engaged the electricity authority to give us what belongs to the community because it is our right.

“We are the host community and we are demanding for our right, and our right should not be denied because we are entitled to it.

“We should have a prepaid meter, enough of outrageous bills, it should stop, he added.

He advised the community to continue living in peace and see one other as one, and stay away from violence.

” Since the inception of the forum it has been and still is a peaceful organization, and we are the host community.

The Chairman Board of Trustee (BoT), Prince Lanre Kuye, commended the efforts of the youth forum so far.

“We are celebrating our 3rd anniversary, the youths have done massively well in our community, kudos to them, we need to honour them and those who have done well for the progress and welfare of this community.

“What we are seeing today is the impact of our great youths and aside from that, we decided to launch a bus for them to move around.

“In the last three years it has been very tough but we were able to join our hands together, we have been able to meet the stakeholders of the community for our progress and I will urge the youths to try and go beyond personal ambition and move the community forward”.

High Chief Aliu Sunmola Musediku, the regent of Ijede kingdom ,said the anniversary meant a lot to them.

He, therefore, praised the youths. In his words, ” they have done so many things and we believe they are going to do more that is the reason we associate with them, he said.

“I will ensure that there is a continuous peace in the community and the youths would be focused and not derail from the purpose of the forum.