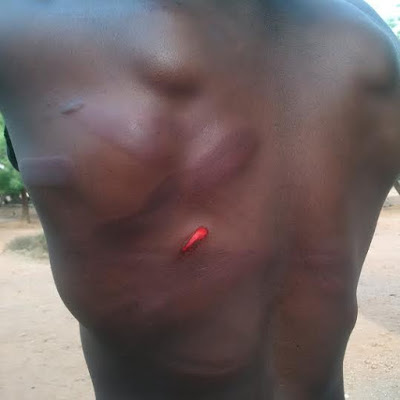 Only God knows how this ones will act if they should become security agents for the country. They are meant to protect and not to beat to stupor. It is not the first time they will be doing it as a lot of students testified against them.

“Here’s what happened. My name is John. On that fateful day, my group members for eed project and I went to  see our project  supervisor.  After seeing him we headed to the bus shed where we get vehicles to convey us home. I saw a cab, as I  tried entering, I  was blocked by a student who came down from the same cab, I asked for the reason for the obstruction,  he said he was talking with the driver.

I  advised him to go to the driver side to talk to him, he didn’t respond. His friend came out from the other side of the door and started using foul language on me, I got angry but I understood the implications of fighting in school,  so I ignored him. I was tired and I wanted to get home quickly; it’s always a struggle to get vehicles home in the evening.

I was able to make my way into the cab by going under his arm. Before the cab moved. The guy who was obstructing me came to window side and started using threatening words. I felt uncomfortable. I came down and told him I’ll hold him responsible if any thing bad should happen to me. At that point he started moving closer to me, he was trying to put on a ring which I believe were charms because his friend had threatened  to hit my group members with charm, as he was getting very close I pushed him back. I never knew the school security were standing around that premises watching us the whole time and immediately they saw me push him, they didn’t ask me anything they decended on me, hitting me with guns and firewoods. They asked me to enter into their vehicle, which I obeyed. They continued hitting me until we got to their security unit of the school. They asked me to come down and lay down on the floor and they got another big stick to hit me, so big that they had to use both hand 2 hold it. They continued hitting me with the stick and gun to the extent that the gun they were hitting me with got spoilt and the sticks also got broken in which they changed it simultaneously and it was like they were going to kill me that day.
They accused me of several things; they said I was  a cultist, that I was not a student and that I was disturbing the peace of the school. I was able to defend myself in all these false accusations. They asked me to stand up and write a statement of what happened which I did, afterwards, they asked me to explain the event verbally to the administrative staffs at the security base. They were all quiet after I was done talking, they pleaded with me and asked me to forget all that had happened. They returned my phone that was seized initially and asked me to go.
I was wondering why they didn’t touch the guy who was obstructing my way into the cab. I got to find out that he’s one of them. They call themselves (security) OPC and the guy is a student OPC, that is why they didn’t touch him.
It is not the first time they have  brutalised students in this manner. They have been doing it and getting away with it but I thank God for my classmates who stood by me to say no to this and are making effort to let the world know what is going on.
I am into security too and I  believe the ethics of the job is to make peace and and hand over people with serious cases to the police, not to take laws into thier hands by beating up people.
These guys are illiterates, they are always high on drugs, and they are bullies. I have never had a reason to fight anybody in school, I  have never wrong them before, I’m not a cultist, I am not a trouble maker. I have proves to all ofthese.

Two days after this incident happened, the school had it matriculation ceremony. The Association Of Mass communication  Student’s General Secretary was sent on an assignment to cover the matriculation of the newly admitted  students for a forthcoming magazine that will be produced by the student in print class of HND2 masscomm. The Gen sec. and his crew were  taking shots and recording. All of a sudden, the assistant CSO spotted him and said ‘you are a stallite!’ he didn’t demand for an explanation from him, the assistant CSO held him by the trousers and slapped him before asking what he came for…. we don’t feel safe anymore in mapoly”.