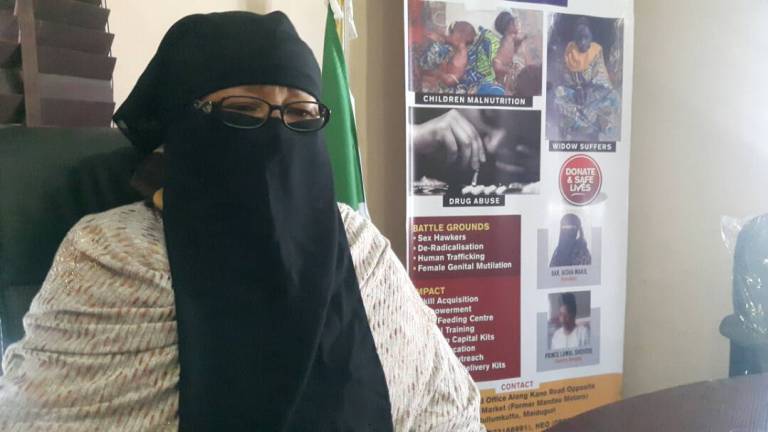 With a strong conviction that the Abu Musab Al-Barnawi-led faction of Boko Haram might be responsible for the abduction of Dapchi schoolgirls, a North-East human rights activist, popularly called Mama Boko Haram, Aisha Wakil, has appealed to the abductors to release the young female captives.

Ms. Wakil, a former member of the Committee on Dialogue and Peaceful Resolution of Security Challenges in Northern Nigeria under the administration of former president Goodluck Jonathan, had, in previous efforts, brought military officers and Boko Haram commanders together during negotiations. She was also credited to the release of some abductees from the Boko Haram sect via phone calls to the leadership, including some Chibok girls.

Speaking to PRNigeria in Maiduguri, Ms. Wakil, who is said to be highly respected by some leaders of Boko Haram, said she was ready to sacrifice her life to rescue the girls from abductors.

The activist was reported to have helped in the circumcision of some kids over two decades ago who later became Boko Haram members. Her relationship with the sect members earned her the name ‘Mama Boko Haram.’

Disturbed by the latest abduction of 110 students of Government Girls Technical College, Dapchi, Ms. Wakil has renewed her commitment to fight to end the Boko Haram insurgency.

The activist who cried profoundly said “This thing that is happening, is really breaking my heart. These children don’t even know what they are doing. Some of them were not even born at the time this thing started.

“Wallahi I will go after them, even if it will take my life to save these girls. They call me Mummy, but they don’t listen to me. I keep on talking to them, begging them to lay down their arms and embrace peace but they will say ‘Insha-Allah mummy we are going to stop.’ Sometimes they will say they are scared they are going to be killed but I will tell them nobody is going to kill you.”

Appealing to the leader of the Boko Haram sect, Ms. Wakil said: “I heard you are now being called ‘Abu Mussad Albarnawi’ but I know you as Habib and I am begging you to stop the killing and abduction. I have sent many messages to you. I don’t know if you are getting these messages or you just choose to continue to hurt your mother and make her cry.

“Dear Habib, Nuru and others, I was told you may be the ones responsible for the kidnap of these girls. Wherever you may be if you are listening to me, I beg you in the name of Allah to release the girls back to their families.

“What type of children will continue letting their mother to continue crying. Dear Habib, I pray Allah touches your heart and that of your colleagues to stop what you are doing. Please come out. I will never deny you even if the whole world did. Those who know you know your heart. They know you are no longer interested in the fight anymore.

“​On my next  political Ambition, I am still consulting for good” Says Makinde.