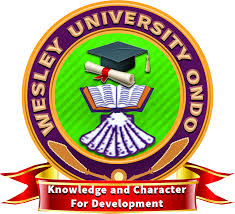 The university management were not reachable as at the time of filing this report.

Related Topics:EducationFeaturedSocietyWesley University
Up Next