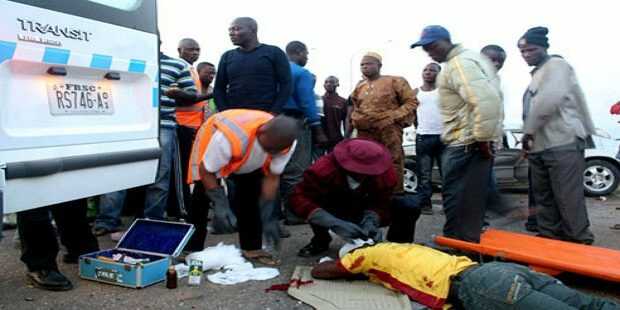 Three persons, a female and two males, on Tuesday lost their lives in a multiple accident involving an articulated vehicle and nine others along the Upper Iweka road, Onitsha in Anambra.

Ajayi said the accident occurred at the Lagos Park axis of the Upper Iweka road at about 10.15 a.m.

“As at the time of reporting, we had nine casualties in three hospitals namely: Toronto Hospital, St. John Hospital and Bethsaida Specialist Hospital, all in Onitsha.

“Three persons have been confirmed dead while six others are seriously injured but are being treated in those hospitals,” Ajayi said.

The sector commander said the ‘stressed’ articulated vehicle with registration number ENU69XY which was heading toward the Onitsha Bridgehead had a brake failure and rammed into several other vehicles on the road.

“You will appreciate the fact that the proactive measure we took saved a lot of lives here today.

“We have sensitised people on this axis against selling or parking along the road.

“I want to make it clear that the solution to road carnage is positive attitude of people driving on our roads,” Ajayi said.

An eyewitness told NAN that the casualties also included a roadside bread seller, an ‘Okpa’ seller and a passerby. (NAN)