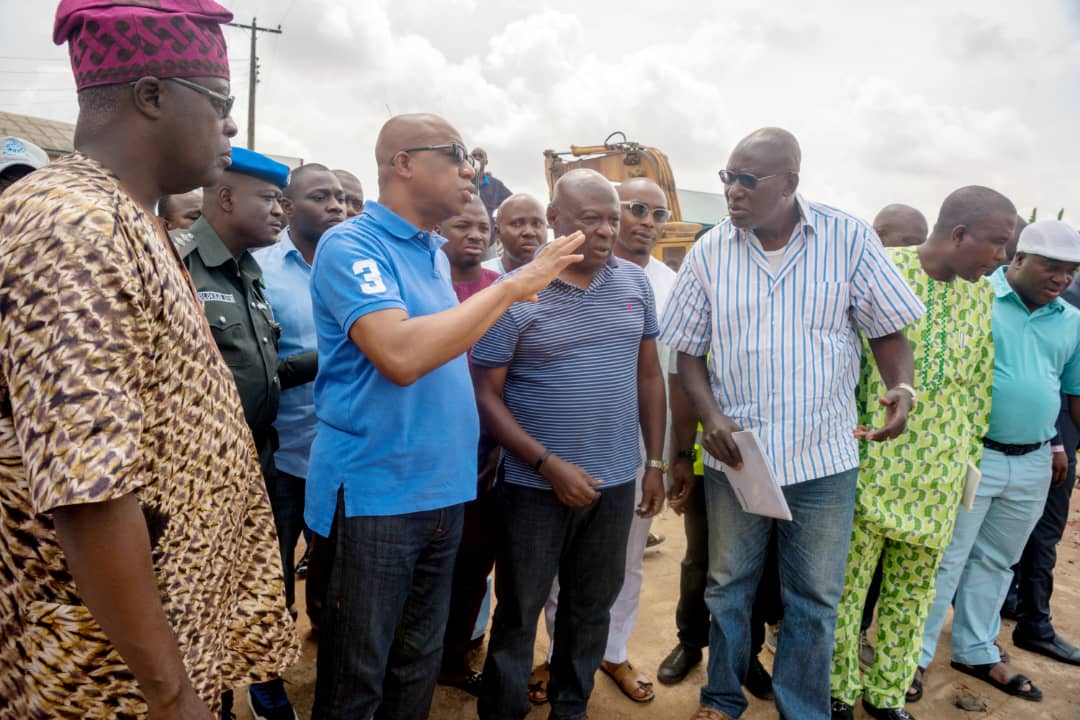 The Ogun State Governor, Prince Dapo Abiodun has ordered the closure of the Adigbe-Opako road In the Obafemi Owode Local Government area of the state, so as to hasten the total reconstruction of the collapsed bridge along the road.

Prince Abiodun who made this known while inspecting the bridge that had collapsed some few weeks ago, due to the large volume of water passing underneath the bridge, said he was perturbed when he received the news of the current state of the bridge and the havoc the recent rain that fell had done to residents of the area.

” You will have to be patient with us,we will have to close this road, because we don’t want any bad thing to happen to you, we will now begin work here and do it very well, what happened yesterday must not happen again, we have to be patient when doing the work, so don’t be annoyed about the stress you will all pass through when the road is closed.

” I have pleaded with the community to allow us close that road, we are going to close that road immediately to enable us employ a more aggressive solution to ensure we permanently address flooding in the area” he said.

He disclosed that his visit with the team of engineers and permanent secretary, Ministry of Works had availed him with first hand information about the need  to change the ring culvert carrying water, as the culvert was too small for the task, adding that the small culvert had made it so easy for water to Leave its banks, affecting residents of the area, calling for patience from the people.

Abiodun informed the affected residents that he would send the emergency relief team to come and meet them on Monday with relief materials, adding that  discussions with the team of engineers on how best to go about finding a lasting solution to the road would also commence on Monday.

In his remarks, Permanent Secretary, Ministry of Works and Infrastructure, Engr. Kayode Ademolake said that work on the Adigbe, Opako road would commence immediately and that the governor would be reviewing the modalities and the engineering approach to the problem.

On the alternative for road users plying the Adigbe-Opako road, Ademolake said that government would look at alternative routes and speed up construction activities so as to minimize the suffering of the people.

Adeifa Sogbehinde and Bose Omikunle thanked the governor for coming to sympathize with them, saying that the government should fast track the process of alleviating their suffering on the road.

In the same vein, Prince Dapo Abiodun has also directed the permanent secretary, Ministry of Works and Infrastructure, Engr. Kayode Ademolake to engage the Federal Controller, Federal Ministry of Works, in charge of Ogun State and Julius Berger, the contractor in charge of the Lagos-Abeokuta Expressway to do some remedial work on the road to give the people relief.

He made the call at Itori while on inspection tour to the yewa axis of the state for on the spot assessment of the infrastructural decay ravaging the area.

Abiodun noted that he would ensure that the road was made more motorable for the people, adding that the road which was a federal road would be looked into in conjunction with relevant stakeholders in the corridor.

” I have asked the Permanent Secretary to call me the federal controller of works and Julius Berger, that is in charge of that road. I am going to ensure that they immediately do some remedial work on that road and make that road more motorable

” In terms of PPP, I will take that up with relevant stakeholders in that corridor, so that we can make sure we get a more responsible level of cooperation from them, you cannot be a stakeholder, enjoy all the benefits of what we have in terms of mineral resources and then your trucks are responsible for damaging our roads, you have to be more responsible, so, we will ensure that we demand that from them,” he concluded.