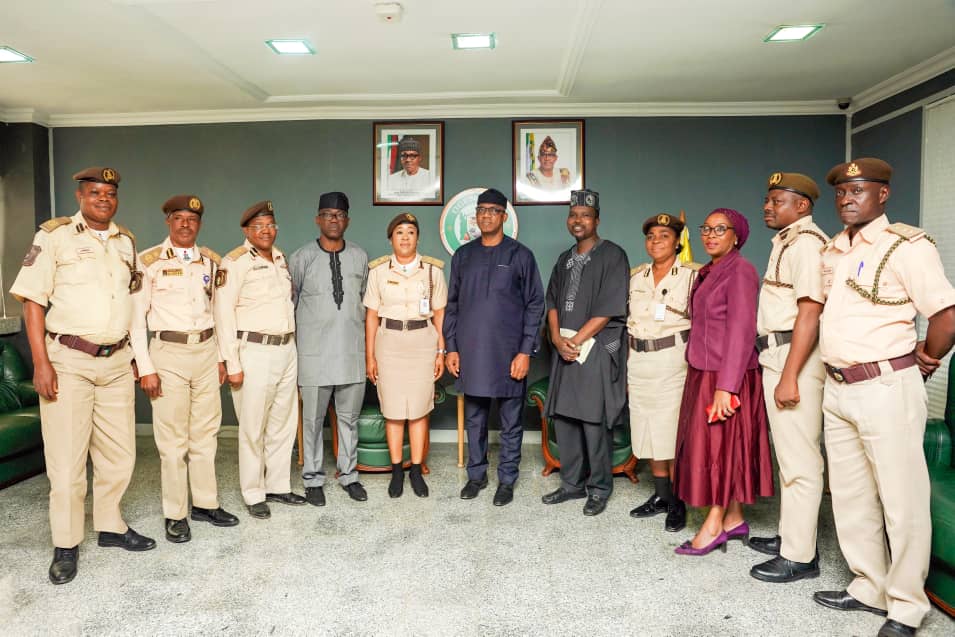 The Nigerian Immigration Service, Ogun State Command has been commended for its role at ensuring that migrants from other countries vying to enter the country through the state during the last general elections were stopped from gaining access, as their safe passage could have spelt doom for the electioneering campaign.

The commendation was made today by the Ogun State Governor, Prince Dapo Abiodun, while he received the State Controller of the Nigerian Immigration Service, Comptroller Doris Braimah and his team, described the cooperation between the state and the service as cordial.

Abiodun who noted that the service rendered by the command was pivotal at ensuring that only those that were citizens were allowed to vote in the border areas, adding that the command rose up to the occasion to ensure that the borders were well manned and protected against external forces.

” I know without going into details what the service did, particularly around election period where we were worried about the influx of migrants from other countries to cause mayhem on the election day, your service rose up to the occasion and ensured that our borders were indeed protected and movement were curtailed,Only those that are citizens were those that voted in those border towns,” he said.

The governor while commending the men of the command for a job well done, said he believed that the level of commitment seen from men of the command would definitely be improved upon under the leadership of the new controller who recently resumed in the state.

He commended the Immigration Service for opting to have a passport front office in Sagamu, saying he hoped the office would be improved upon and made a full fledged office as the people of the town had done a lot to ensure the service was comfortable by building and donating a office for the passport front office.

Abiodun noted that the state would not condone any form of lawlessness, criminality and cultism, adding that his government would ensure that the state remains peaceful, as the state being the home to the largest number of industries in the country, would not allow any thing that would undermine it’s desire to continue to pull into the state more industries.

Earlier in her remarks, the Ogun State Controller, Immigration Service, Comptroller Doris Braimah noted that the command would play its role as a worthy partner in ensuring that the security architecture of the state was developed, adding that they would join hands with other security agencies in the state to ensure that lives and properties were protected.

She said that the registration of foreigners which commenced recently in the country would afford the state an opportunity to have a proper data of foreigners leaving in the state.

Meanwhile, the Ogun State Governor has assured the League of Imams and Alfas in the state of his administrations desire to continue to give to the people good and qualitative governance.

Abiodun who made this known in his office, Oke Mosan, Abeokuta, while receiving the League of Imams and Alfas of Ogun State, said that he was delighted that the state was able to prepare for the Hajj exercise, despite that his administration only came in at a time when preparation ought to have reached a concluding stage.

In his response, the Chief Imam of Ogun State, Alhaji Liadi Orunsolu commended the governor for ensuring the smooth passage of pilgrims to the holy Land of Mecca, saying that the League of Imams and Alfas in the state would continue to support his administration.