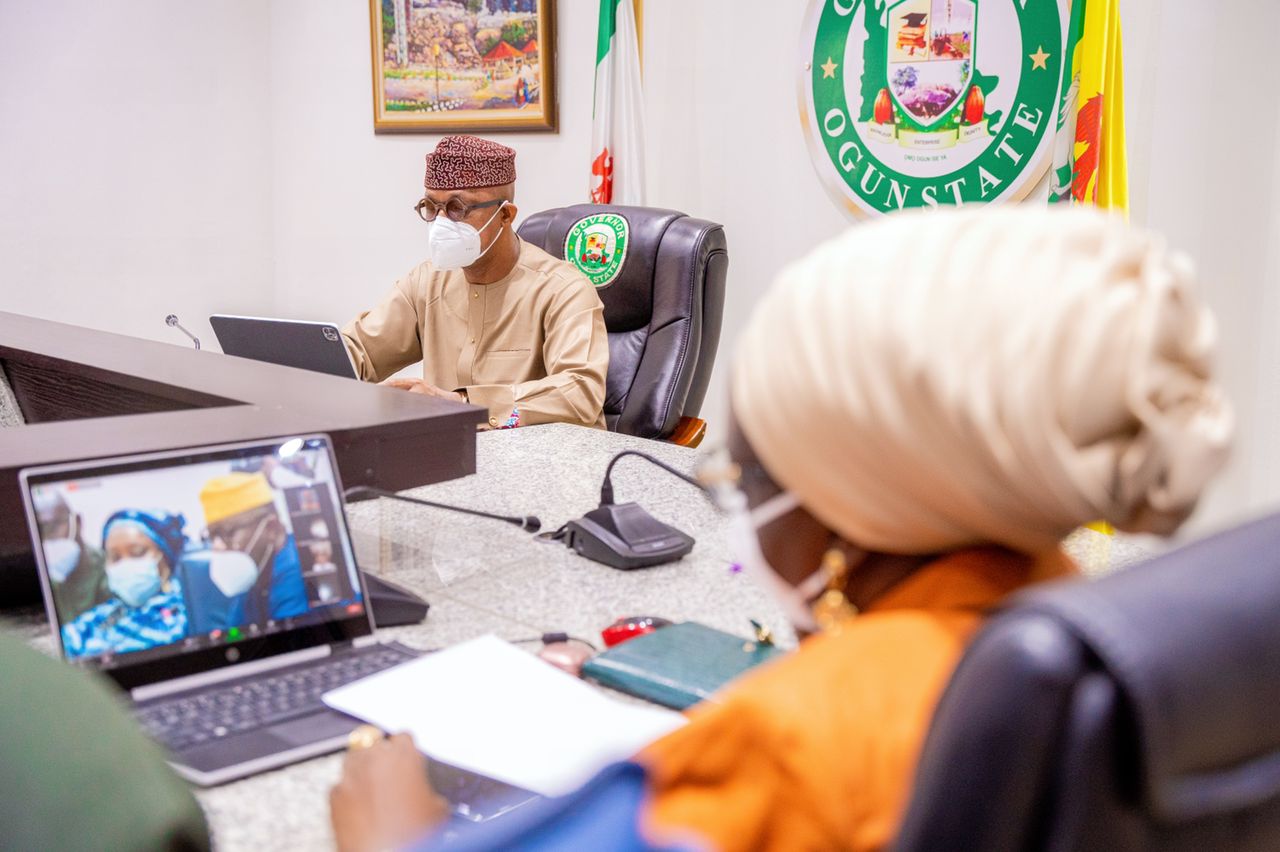 Sahara Weekly Reports That The Ogun State governor, Dapo Abiodun, has said his administration would shop for N13b to fix deplorable portions of Lagos-Ota-Abeokuta Road.

The governor equally disclosed that plans had reached advance stage to build three new housing estates across the three senatorial districts in the state.

Abiodun stated these in his address at the virtual citizens’ engagement (town hall meeting) on 2022 – 2024 Medium Term Expenditure Framework (MTEF) and 2022 Budget for Ogun West Senatorial District, held on Thursday, in Abeokuta.

He explained that his administration had elected to decentralize and liberalize the space by ensuring that all our people from the three Senatorial Districts have equal opportunity to rub minds with those who hold the public trust to govern and for you the people to have inputs in their basic needs.

Abiodun added that the Town Hall meeting which kicked off on Wednesday in Ogun East, was to further ensure that critical stakeholders and people in the state express their views and expectations for the next year budget.

The governor declared that  development of Ogun West senatorial district would continue to be of topmost importance to his administration, assuring the zone would continue to receive the deserved attention of his government.

Abiodun, who described Ogun West  as the major outlet to other West African States and the Industrial Engine Room of the state, said his administration would remain irrevocably committed to making Ogun a truly investors’ first choice destination, not only in Nigeria, but in Africa.

He added his administration would never toy with development and welfare of the inhabitants of the senatorial district, which is home to Agbara Industrial Estate with over 400 national and multinational brands.

“The people of Ogun West are priceless jewels. We are also the Industrial Capital of Nigeria because Ogun West has the largest concentration of factories and industrial hubs in the country. This Senatorial District is the home of Agbara Industrial Estate, which is one of the largest Industrial Estates in the entire sub-Saharan Africa; this same Industrial Estate is home to over 400 national and multi-national brands. In fact, it is this same Agbara Industrial Estate that attracted the location of the Ogun Guandong Free Trade Zone at Igbesa which is also in Ogun West Senatorial District and that Free Trade Zone remains a viable commercial hub till tomorrow. It needs no gainsaying, therefore, that our Administration is irrevocably committed to making Ogun State a truly investors’ first choice destination, not only in Nigeria, but in Africa and consider the welfare of its inhabitants non-negotiable”, the governor stated.

The governor said that no fewer than 196 projects had been executed in Imeko Afon, Yewa North and Yewa South local government areas in Ogun West senatorial district, by his administration.

He further stated that his government has commissioned the Raypower and Ikola/Osi-Ota road to open up Ota and other towns along Alagbado/Ipaja border line for more investments and continued socio-economic development in the area.

He added that the reconstruction of the 19km Atan-Lusada-Agbara road had started, while the 10.25km Lusada-Igbesa road had also been commissioned.

“We are assiduously working on the Ilaro-Owode–Idiroko Road, which is a Federal Road, like we do on Epe-Ijebu-Ode Road in the East Senatorial District and Sagamu-Abeokuta Road in the Central Senatorial District. As we await the Federal Government’s approval on transfer of the reconstruction of Lagos-Ota-Abeokuta, we are daily on that road to fix the failed portions.

“It is noteworthy that Otunba Mike Adenuga has already committed to reconstruct the 64 kilometre Ota-Idiroko International Road through tax credit. Ditto for Alhaji Aliko Dangote who has been granted leave to reconstruct the 100 kilometre Ilaro- Papalanto-Sagamu Interchange Road also through tax credit, amongst roads that we hope to fix through Public Private Sector Partnership (PPP).

“We will continue to improve our PPP programme to identify necessary funding options for the rehabilitation and reconstruction of major roads in our dear State”. Abiodun pointed out.

While pleading for the patience, understanding and fortitude of the people, the governor said that the Ogun State Public Works Agency (OGPWA) has been empowered and mandated to continually do palliative works on bad roads so as to make them passable.

“We are turning the state to a massive construction sites with road projects across 18 of our 20 LG Areas. Needless to say that we are in all the 5 LGAs of Ogun West. In Yewa North Local Government, our men are working on Imasayi-Igan Okoto-Ayetoro Road; in Imeko Afon, we are reconstructing Oke Ola and Ago-Oshoffa Roads; in Ipokia, we are fixing the Oke Afa Road and Bridge at Agosasa; the Joju-Oju Ore Road in Sango-Ota road is on-going while we have decided on another approach to expedite the completion of the construction of Owode to Ilaro road.

“Hosting this Town Hall meeting, today and I believe, will further strengthen the partnership of our Administration with our good people of Ogun West and your contributions will accelerate development due to good representation of the people’s needs and desires in the year 2022 Budget of our dear State and beyond.

“In the Housing sector, we are building an affordable Housing Estate in the heart of Ilaro. Work will also commence in earnest as we have secure space for units of Medium Income House for Ado-Odo/Ota Local Government. The icing on the cake is that I have ordered that local masons, labourers, electricians, suppliers, artisans and all that would be involved must be locally sourced, to underscore the need for fair and even handed development, as well as improved prosperity for our people across all sectors and sections across our Senatorial Districts. For me, no section of this State will be developed at the expense of the other”, the governor stated.

Abiodun, however, thanked the royal fathers, community leaders, Baales and members of the Neighbourhood Watch and Hunters, who have been supporting the state’s security architecture to ensure safety of lives and property across the Ogun West in particular, and the State in general, especially during the farmers-herders skirmishes early in the year

He also assured that his administration would take copious note of people’s comments, recommendations, proposals, submitting “all of these will be taken as an important factor in the preparation processes of the year 2022 Budget of our dear state”.