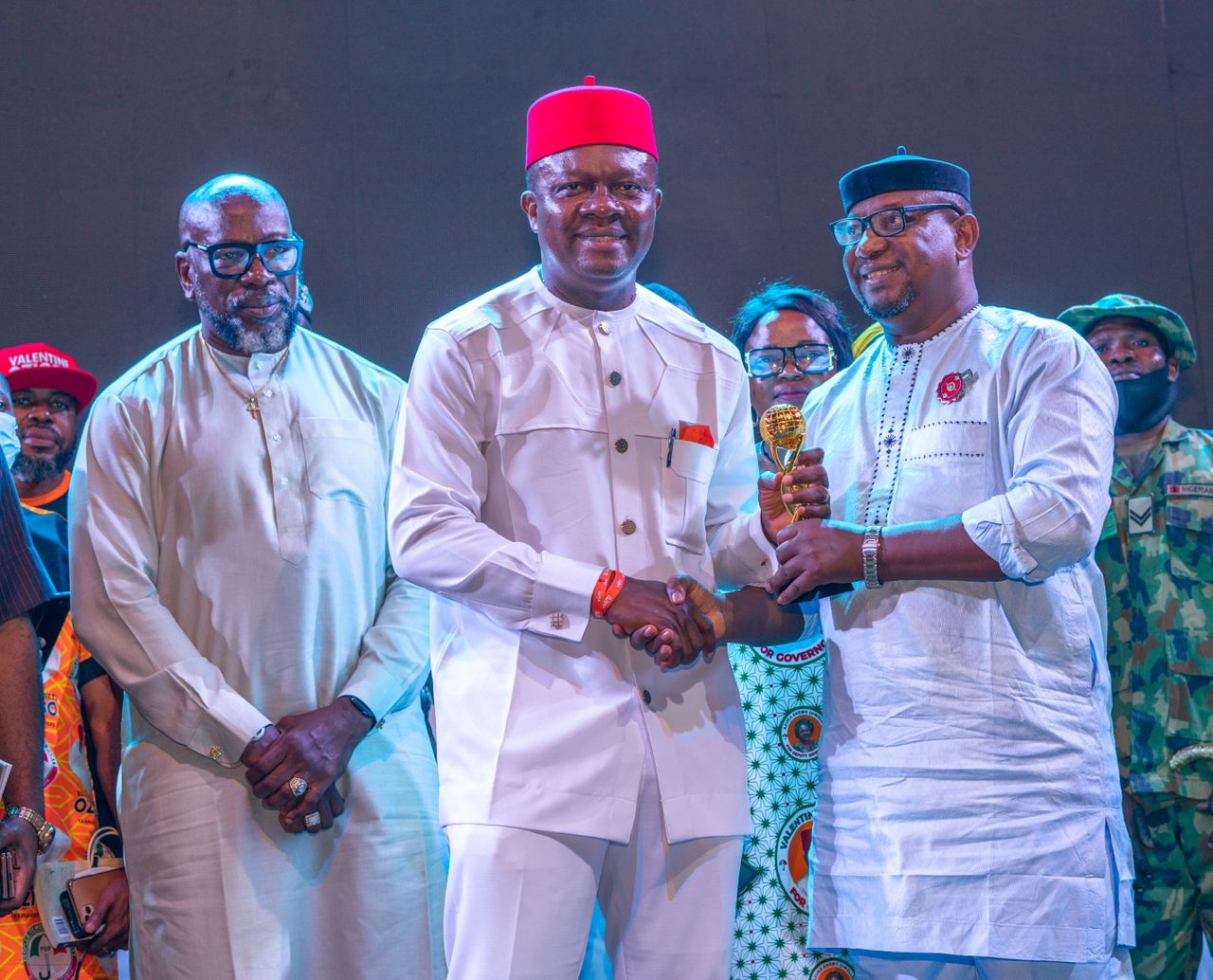 For their positive contributions, the people of Anambra State at the weekend celebrated and honoured some individuals who have distinguished themselves in the State and Nigeria, generally.

Those honoured were drawn from different careers which include industry, politics, education, tourism, banking sector, entertainment.

Other awardees include Mr Nonso Okpala of VFD Group Plc who was named Rising Star and Inspiring Leader of the year, Alex Ekene Nwankwo (Alexreports) a popular Abuja based PR guru as the media person of the year,Chief Alexander Ejesieme (SAN) as the Legal Practitioner of the Year Award.

The awardees were honoured at the second edition of the annual Anambra man of the year award 2021 held in Awka State capital.

Ozigbo, who is the immediate past President and Group CEO of Transcorp Plc, and Alexander Chika Okafor of Chicason conglomerate were honoured as Anambra man of the year, respectively for their immense contributions to the State and its development.

Speaking at the event, the Chairman on the occasion, Major General Anthony Emeka Ajemba (Rtd) said he was moved by the calibre of people honoured.

He noted that the award would make most Anambra people to think home and invest in the State.

He also said that the award would encourage the young ones to work hard to be great like the awardees .

The Managing Director of Nigeria Inland Waterways Authority, Dr George Moghalu who delivered a keynote address said the event had afforded all the stakeholders an opportunity to articulate the best vision of the State’s future and consider what needed to be done to achieve the desired goals.

Moghalu said the State and its people were not where they ought to be due to failure in the system .

“We have allowed our State and our people to become caught up in the tyranny of low expectations that encourage us to set small goals and celebrate basic achievements. Worst of all, we have succumbed to the fallacy that the problems that bedevil us are beyond our collective capacity. This is where we are.

“Now, to the question of where we ought to be; you see, Anambra State is a promise unfulfilled. We are a people of boundless capacity, with a history of excellence in every area of human endeavour.
“Our biggest challenge has always been the opportunity challenge: the absence of the social infrastructure necessary for individuals to achieve their highest ambitions.

“The best vision of Anambra State’s future for me is that of a State where our children can dream big dreams and have the opportunity to achieve those dreams here at home and to the benefit of us all. And I believe that we can make this possible through the practice of principled politics.

“The kind of politics that emphasizes caring for the sick, the afflicted; housing the homeless and building ladders of opportunity that allows every citizen, regardless of the circumstance of birth, to achieve by the strength of their own endeavours the best aspirations of the human spirit, ”he said

He called for restoration of moral authority of government, modeling the best practices that allow people to believe that government could be a force for good in their lives.

“We cannot do any of these things for as long as we practice a myopic politics focused on pursuing short-term gains, personal enrichment, and the service of ambition for its own sake. Whereas politics ought to be a means to achieving progress and a more just society, in Anambra State, it has become the exclusive preserve of merchant politicians trading the common good for private profit.

“Most troublesome of all, is that a new generation of younger politicians are emerging who have known no other style of politics other than the belief that this desperate and depraved style of politics is the only way there is. A political belief rooted in the corruption of due process and the violation of the rights of people can never yield any good outcome, ”he said

Receiving his award, Ozigbo
thanked the organisers of the event for their commitment towards excellence and the promotion as well as celebrating Anambra people.

He said when he thought of enormous bundle of blessings that was in Anambra, he felt humbled and honoured to have been chosen by Anambra people in a public vote.

Highlighting the tragedy of the wide gap between Anambra’s potential and its achievements he said, he was saddened by the state of things in Anambra State.

He noted that the State was unable to boast of essential social services like good motorable roads, universal basic healthcare, or free quality education for the children.

“On the one hand, we are an Anambra, the ‘home of the most billionaires in Nigeria’, but on the other hand, we are also home to thousands of out-of-school children. We are Anambra, the land of a proud and prosperous people; we are also where a sad majority of our women cannot access the vital healthcare they need to stay alive when pregnant.

“We are Anambra, the home of the globally celebrated business tycoons, doctors, academics, professors, world champions. We are also a hotbed for criminal behaviour because we have a youth population stripped of their dreams, hopes, and belief in themselves because of the lack of opportunity.

“I sought public office because I was dissatisfied with the contrast between our limitless possibilities and our present state, the tragic paradox of the Anambra of our dreams and the present-day Anambra.

“As long as the tragedies of poor leadership remain, I will not give up on Anambra or my people. I will continue to do what is necessary to raise our people’s political consciousness, raise our people to a new mind, do what is necessary to correct the errors of the past, and open the doors to a brand new future of enormous possibilities, ” Ozigbo said.

Also speaking after receiving his award Executive Chairman of Chicason group,a conglomerates of sixteen companies , Chief Chika Okafor urged the young ones in the State to work hard to achieve success in their lives, noting that nothing good comes simple in life.

He noted that he is not chairman of about sixteen companies overnight but after a long period of putting in hard work.

He said that it took hard work and strategic planning to achieve success in life .

The Nigeria Police Force, Oyo State Command, has commenced sensitisation talks with political stakeholders in preparation for hitch free campaigns ahead of the 2023 general polls in the state.

The command’s spokesman, SP Adewale Osifeso, made this known in a statement on Friday in Ibadan.

Mr Osifeso said that the Commissioner of Police in the state, Adebowale Williams while addressing the stakeholders, enjoined them to embrace peace and shun acts capable of truncating the relative peace and tranquility enjoyed by residents.

The Commissioner of Police advised the political parties participating in the general elections to submit details of their campaign schedules to include dates and routes for adequate security cover.

He told the gathering that the command had formed a special crowd control unit to cater to cases of crowd management before, during and after the campaigns.

Mr Williams said that there would be regular patrols across the length and breadth of the state, intelligence-led stop-and-searches and technology-aided surveillance during the period.

He called on parents, guardians and leaders wielding various degrees of influence to prevail on their children, wards and protégées to avoid being used as cannon fodders by agents of mischief to disrupt the polity.

Mr Williams warned that heavy sanctions awaited violators in accordance with the laws and statues of the land. Rivers State Governor, Mr Nyesom Wike few moments ago (Friday) distanced himself from a purported suit said to have been filed by him seeking the removal of Atiku Abubakar as presidential candidate of the People’s Democratic Party (PDP) in next year’s general election.

This comes few hours after some media outfits had reported that Wike had ordered the removal of PDP flags in Rivers State government house, which also turned out to be false.

In an exclusive chat with THISDAY, the Governor denied knowing anything whatsoever about the purported suit or even knowing the lawyers who filed the suit in the first instance. “I don’t know anything about the so called suit. I did not ask anyone to file any suit for me”

The media was on Friday morning awash with reports that Governor Wike and one Chieftain of the PDP, Mr Newgent Ekamon, had dragged the PDP to court seeking the removal of Atiku as Candidate of the PDP in next year’s presidential polls.

According to the purported suit marked: FHC/ABJ/CS/782/2022, the plaintiffs were said to have hinged their claims on the grounds that the PDP primary conferred undue advantage on Atiku which aided his emergence as candidate of the PDP in the May 28 and 29 primary.

Reacting to the publication, Wike flatly denied the suit said to have been filed at the Federal High Court, Abuja. He described the suit as the handiwork of mischief makers who merely want to use him to score cheap political goals.

He stated emphatically, “I don’t know the lawyers”. Continuing, he said, “am I a kid to be filing a suit at this time. I had 14 days after the primary within which to have filed any suit. I didn’t do that then, is it two months after primary I will file a suit?

He also recalled that, “just yesterday they came up with the claim that I ordered my Chief Security Officer to pull down PDP flag in Government House. This is all false, it’s all propaganda. Some people are trying to use me to win the election. Please disregard all these lies”.

Governor Nyesom Wike has filed a lawsuit against Atiku Abubakar over the 2023 presidential ticket of the Peoples Democratic Party.

Mr Wike filed the lawsuit alongside another PDP member Michael Ekamon, according to filings entered before the Abuja Division of the Federal High Court. The applicants also joined the PDP, Governor Aminu Tambuwal and the Independent National Electoral Commission (INEC) in the matter.

The parties were served on July 1, and a PDP official responded to the originating summons on August 5 in Abuja. The lawsuit could complicate the main opposition party’s drive and message leading to the 2023 general elections — for a platform already bogged down by the upswing of Peter Obi and his Labour Party base.

It also comes as a reconciliation panel begins sitting to resolve a cold war between Messrs Abubakar and Wike over the outcome of the presidential primary and the selection of a running mate by Mr Abubakar. The crisis escalated last week when Mr Wike publicly accused Mr Abubakar of lying about the extent of the infighting while allegedly instigating attacks through Sule Lamido and others, calling them “attack dogs.”

Mr Wike has been seething over the convention outcome for several weeks, and his anger intensified after Mr Abubakar passed him over for Ifeanyi Okowa as the vice-presidential candidate. Mr Abubakar said competence and loyalty weighed heavily in his considerations for a running mate.

Mr Wike came second during the primary, scoring 237 votes to trail Mr Abubakar, who polled 371 votes from the total 767 votes cast at the convention ground in Abuja. The Rivers governor blamed his defeat on Mr Tambuwal’s decision to step down for Mr Abubakar at the last minute, describing the process as unfair — even though he did not argue that it violated the party’s standing rules.

A spokesman for Mr Abubakar did not immediately return a request seeking comments about the suit. Messages sent to a PDP spokesman did not deliver on Thursday evening. But sources close to the former vice-president said he had a meeting with his legal team at Yar’Adua Centre in Abuja on Wednesday night, although it was unconfirmed whether Mr Wike’s lawsuit was among the issues discussed.