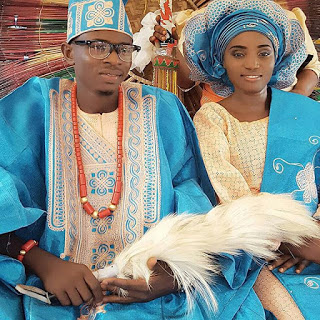 Its no longer a news that the veteran actor, Odunlade Adekola’s brother, Jethro Oyekanmi Adekola who is also an actor will be hooking his heartthrob, Blessing Adebori on October 1st, at Abeokuta.

Present were friends of the couple and Odun’s. The brothers who are from Otun Ekiti, Ekiti State had the traditional ruler of the town represented and he sent his staff of office which was placed behind the couple.

An excited Odunlade posted on his social media: “Don’t be surprised to see the #OPA ASE at the back, in the picture….KABIYESI, OORE OF OTUN EKITI kabiyesiiiiiiiii oooo. He Sent his delegates with the royal staff because we are from ROYAL family.. Congratulations!!! to the latest couple in town.” (sic)

This is the first leg of the wedding.

The church solemnisation comes up on October 1, 2016 in Abeokuta, the Ogun State capital.

more photos of the event: