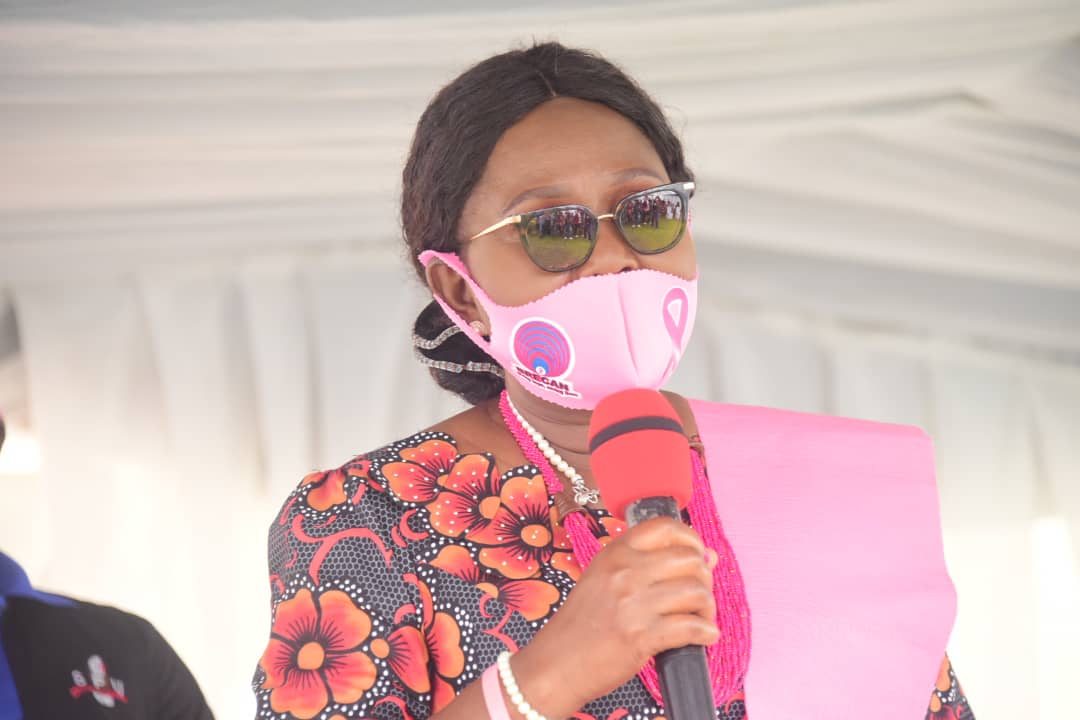 The wife of Ondo State Governor and founder, Breast Cancer Association of Nigeria (BRECAN), Arabinrin Betty Anyanwu-Akeredolu went down memorable lane, recalling how she birthed the BRECAN dream over 23 years ago.

Addressing participants at this year’s celebration of Pink October, organized by the Oyo State chapter of BRECAN, Mrs. Akeredolu expressed happiness at seeing the seed of BRECAN blooming.
Mrs. Akeredolu, a survivor revealed that she almost gave up because not many people wanted to be associated with the NGO as they regarded invitation to join BRECAN as an invitation to be a victim of breast cancer.
“I can never forget those days when I was a lone voice in the wilderness. It was a time many people were so scared of coming out as it appears being a member was like inviting breast cancer.

“Nobody wanted to be associated with us. Only very few people stood by me and we trudged on. I watched many people suffering in silence and at a time, I wanted to give up”, she recalled just as she thanked all those who had remained a strong pillar of support for the association over the years.
Mrs. Akeredolu also used the opportunity to advocate the use of healthy lifestyles to fight cancer, saying one of the benefits members enjoy was not financial gain but an inner satisfaction that emboldened them to speak up and become advocates for the cause.
In his lecture, Dr. Bolaji Lateef-Salako, Lead Oncologist from the University College Hospital, Ibadan, explained how cancer forms in the body just as he restated the importance of early detection, urging women to check their armpits as the breast extends to the armpit beyond the nipples.
Dr. Salako also stressed the importance of healthy lifestyles and eating right, while urging women to take the bold step to visit the hospital if they discover any signs in the breast.
Also speaking, Dr. Adeola Badiru, in his goodwill message applauded Mrs. Akeredolu for initiating BRECAN to impact positively on the lives of the people long before becoming a First Lady, saying many other First Ladies initiate programmes that are politically motivated and died prematurely.
The National President of BRECAN, Mrs. Juliet Ogbogu, while calling for supports, said there were lots of people who could not afford the cost of treating breast cancer but BRECAN had been there to save their lives.
Earlier, the Chairperson, BRECAN Oyo State, Tolu Taiwo, in her welcome address said over the years, BRECAN had been at the forefront celebrating two major programmes; World Cancer Day on February 4 and Pink October as part of ongoing efforts to reach out and create awareness about early detection of cancer.
While stressing that the association could not celebrate this year’s Pink October with Jog4Life as a result of COVID 19 protocols that requires the use of face mask, Ms Taiwo said Pink October celebration is a global one to raise awareness and advocate early detection, raise funds and showcase the survival of cancer patients.
PHOTOS 01; 02: Ondo State First Lady and Founder of Breast Cancer Association of Nigeria, BRECAN, Her Excellency, Arabinrin Betty Anyanwu-Akeredolu, at the grand finale of the 2020  Annual Pink October Awareness Program organized by, BRECAN Oyo State Chapter, held at BRECAN Centre, 18 Akinyemi way, off Ring road, Ibadan, Oyo State at weekend.