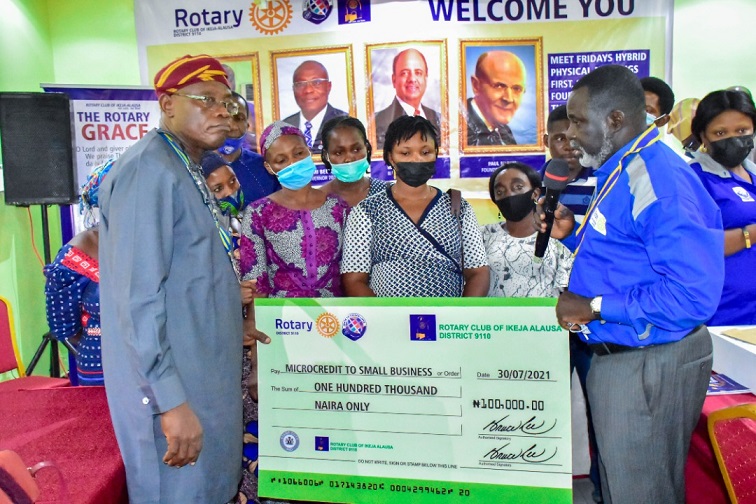 The Rotary Club Ikeja-Alausa has commissioned a set of new projects for the benefits of its immediate community.

The commissioning of the projects facilitated by the Club was to mark the visit of the District Governor Remi Bello (FCA)  to their Club this 2021 Rotary year .

The projects facilitated by the club and commissioned by the visiting Governor include; renovation of a block of 12 toilet units at Olusosun Primary School, Oregun Lagos,  adoption of the school for infrastructural face lifts and academic excellence supports by the Club as a part of  the District’s Adopt -a- Primary School Project.

The District Governor also used the opportunity to pay a courtesy visit to the Oba of Eregun, (Oregun)HRM Oba Olusesan Olukunmi Akingbola in his palace at Oregun, Lagos.

Speaking at the Oba’s Palace the  chartered President of Rotary Club Ikeja-Alausa, Prince Adeyemi Aseperi-Shonibare said the visit was to pay homage to the traditional ruler by the District Governor and his entourage. According to him,  “as the foremost traditional ruler in the community, courtesy demands that the District Governor should pay him an homage as he was in his territory for an official assignment.”

In his response, Oba Akingbola thanked the organization for the visit and also congratulated them for the projects executed in the community. He said; “I sincerely thank you for the visit and the respect you have for the traditional institution and I also congratulate you for a successful completion of projects in the community. This is very laudable and I am very impressed.”

Meanwhile, as part of the program for the visit,  seven new members were inducted to the Club. The induction which was done by the District Governor,  Remi Bello had  music Producer , Song writer, Singer and entertainment consultant, Kenny Saint Brown,  Captain Ademola Adeoye, Personality Image Branding Consultant and administrator, Otunba Femi Davies and a Horologist, Olubunmi Ogunkunle inducted.

While welcoming the new intakes, the chartered president of Rotary Club Ikeja-Alausa, Prince Adeyemi A- Shonibare encouraged them to see their membership of the club as an opportunity to serve their communities and mankind as a whole.

Speaking further on behalf of the Club, Shonibare in its  message  thanked the governor for his visit and promised to work with him to achieve his goals for 2021-2022 Rotary year.

Other highlights of the event was award and recognition of Club members, other Rotarians and organisation. Those awarded include; Rotarians Dotun Lampejo, Henry Akwara, Afolabi Babatunde, Niyi Adelaja, Tonna Oguzie Ofuasia, Sola Adewole , Muyiwa Fagbola as well as Erith Apartments, presentation of award by the governor to Rotarian Prince Adeyemi Aseperi-Shonibare, and presentation to the District Governor

30 YEARS AFTER, NESTOIL CONTINUES TO LEAD INNOVATION IN LOCAL CONTENT