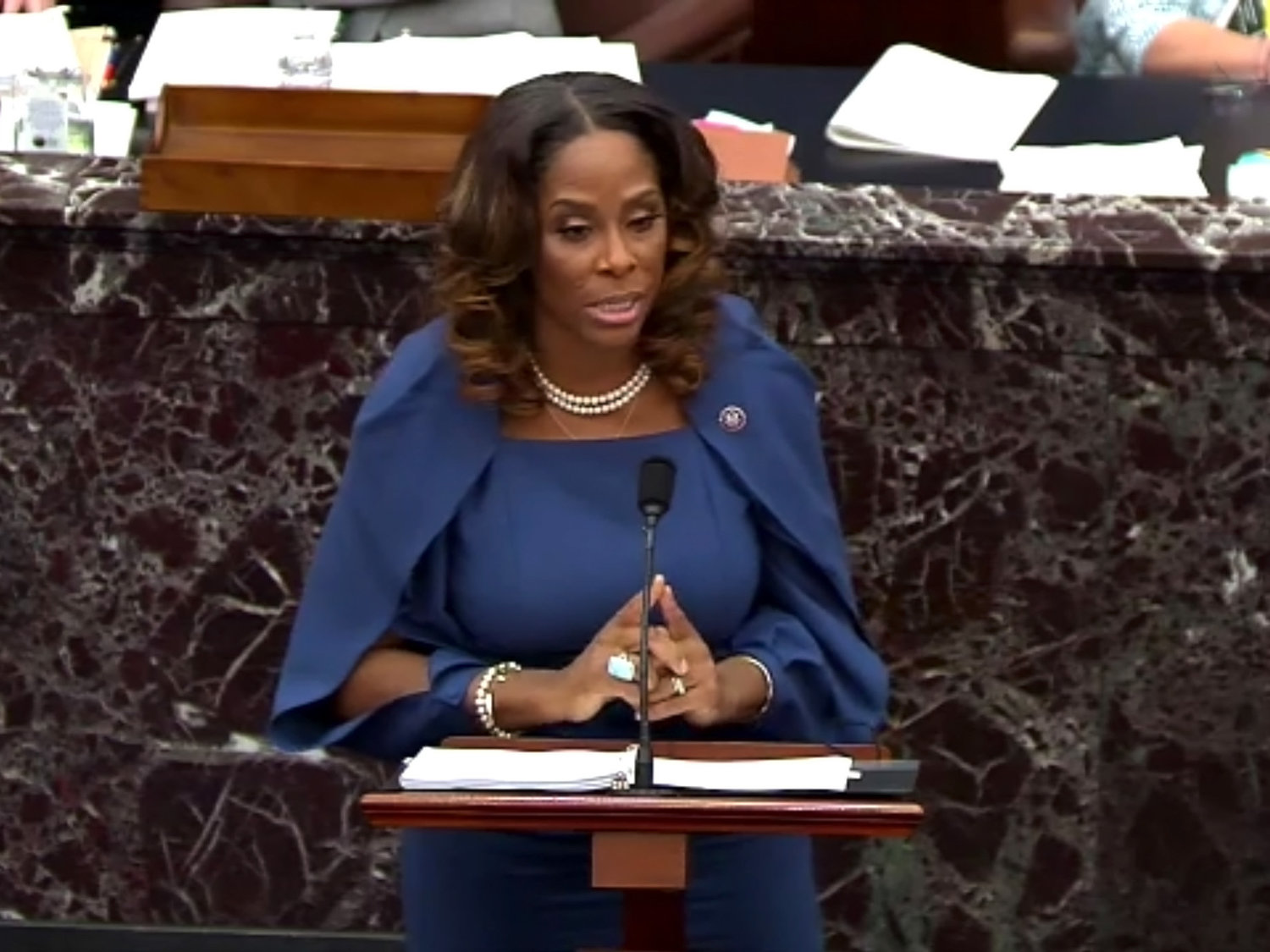 Stacey Plaskett made history on the Senate floor Wednesday when she became the first non voting delegate to the U.S. House of Representatives to serve as an impeachment manager.

WASHINGTON, DC – FEBRUARY 10: Del. Stacey Plaskett (D-Virgin Islands) speaks on the second day of former President Donald Trump’s second impeachment trial at the U.S. Capitol on February 10, 2021 in Washington, DC. House impeachment managers will make the case that Trump was “singularly responsible” for the January 6th attack at the U.S. Capitol and he should be convicted and barred from ever holding public office again. (Photo by congress.gov via Getty Images)

Plaskett represents the U.S. Virgin Islands, which as a territory does not have a vote in Congress. She is in the unique position of arguing the case to convict former President Donald Trump for inciting the Jan. 6 attack on the U.S. Capitol but having been barred from voting to impeach him in the chamber she serves.

“I’ve learned throughout my life that preparation and truth can carry you far, can allow you to speak truth to power,” Plaskett said in her opening remarks.

She touched on her unlikely journey from housing projects in Brooklyn, N.Y., to St. Croix, the U.S. Virgin Islands, “and now as an adult woman representing an island territory speaking to the U.S. Senate.”

She left unsaid that with Vice President Harris no longer a senator, Plaskett was the only Black woman in the chamber.

Lead House impeachment manager Jamie Raskin, D-Md., introduced Plaskett, whom he taught in law school, calling it “a moment of special pride” for him.

Democrats say the insurrection was prepared in full public view

Plaskett presented House Democrats’ argument that Trump played a leading role in both organizing and ordering the attack on the nation’s citadel of democracy.

“You’ll see that this violent attack was not planned in secret. The insurgents believed they were doing the duty of their president. They were following his orders,” Plaskett said.

Trump’s legal team has argued that the former commander in chief should bear no responsibility for the deadly attack on the Capitol that left five people dead, including a Capitol Police officer who was beaten by rioters.

During impeachment proceedings Tuesday, Trump’s defense attorneys argued that his remarks at the rally prior to the attack are protected speech under the First Amendment.

His team added that if House Democrats were serious about seeking justice, they would wait for the investigations into the attack to be completed and look to prosecute the self-styled militias whose members communicated in real time during the siege.

Plaskett pushed back on those assertions, telling senators that the former president was central to the attack.

The four-term congresswoman ticked off examples, including the presidential debate in September when the then-president refused to denounce the far-right group the Proud Boys, telling them to ‘ stand back and stand by’

She weaved in other incidents, arguing that Trump continued to stoke this violent base, such as during a December 12 rally in Washington, D.C , when pro-Trump supporters clashed with counterprotesters. Four people were stabbed and dozens were arrested.

Plaskett said that the rally was organized by Women for America First, the same group that secured the permit for the rally that preceded the attack on the Capitol. The Proud Boys were present at both, Plaskett said.

“He organized Jan. 6 with the same people that had just organized a rally resulting in substantial violence,” Plaskett added.

She noted that the difference between the December and January events is that Trump took it a step further and made sure “his cavalry” did not remain unused.

Plaskett then read Trump’s own words from the rally:

Plaskett said that for all these reasons, the former president must be convicted and disqualified from seeking federal office again.

Trump’s legal team claimed on Tuesday that House Democrats are trying to convict Trump in part because they are fearful of facing him in the 2024 election.