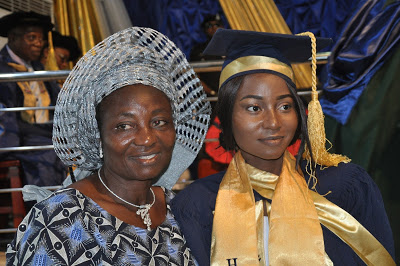 It was Ifeoluwa Bejide’s day at the filled auditorium, during the 9th Convocation ceremony of Redeemer University, Ede in Osun state few days ago. Present was the Visitor of the university Pastor Enoch A. Adeboye, his wife Mummy GO of the Redeemed Christian Church of God, the Chancellor and Vice Chancellor, the principal officers of Redeemer university, honorary awardees amongst them the elderly Statesman General T.Y Danjuma, boardroom guru Mr. Felix Ohiwerei, the Deputy Governor of Osun state, other dignitaries, the press, parents, guardians, students and friends of the university.

It was at this ivory tower special occasion, that Ifeoluwa Bejide was announced the Best Overall Student of the year 2016-2017. She graduated with a record feat of 4.93 score in Bsc Hons Micro biology. An uproar went up in the auditorium as she walked up to the podium to deliver a short speech and also for a handshake with the dignitaries and collection of her various prizes including cash.

It would’ve been just another celebration of success, but the journey to that celebrated height came with a moving story. One that brought tears to the eyes of many in the auditorium, even as her mother came out of the sitting audience to roll on the floor in her dainty apparel, in honour of God’s goodness in her life and that of her children.

20 year old Ifeoluwa confessed she had sold pepper, tomatoes and swept the classes of Redeemer University all the 4 years of her stay in the campus, along with her mom, to ensure she sailed through her study programme. Even a day before the graduation ceremony, Ifeolowa, in the company of her mom, had attended to this same sweeping duty on campus.

Being raised by a single mom with another sister, Ifeolowa persevered through their low state of income to achieve the academic feat. Many cleaned away the tear stains on their eyes because ironically, Redeemer University, a private university is meant more for the rich and the affluent who were also seated in the auditorium that day.

Asked how her daughters educational journey had been, Ifeoluwa’s mom replied, “It has been rough but God made us to weather the storm to this point. She confirmed that Ifeoluwa had always been brilliant, a source she attributes to a prophecy made by a man of God. “We used to live in Akure at a time. An evangelist/prophet came around then and singled her out for prayer. He told her ‘go and be the head wherever you find yourself.’ And so in her primary school she became the overall student. At the Redeemer Secondary School, she was the best graduating student too. That increased my faith that when God says something, it is bound to happen.”

Also asked where Ifeoluwa’s dad was due to his absence on such a special day, Ifeoluwa’s mom simply replied, “Well, he is not around, and hasn’t been around.”

But for the future, she would love to see her daughter “continue with her education because she is still young and has time to study and become someone in life and then take away the broom from me. Even as at yesterday, we were there in the classrooms, sweeping together.

She went on to reveal how she luckily got the sweeping contract with the university, which ensured Ifeoluwa’s hope of eventually getting a university education.

“I used to work as a secretary at the Redeemer University when it was located at the Redeemed Camp in Mowe. But there was a time when the university was over-staffed and there was the need to down size. Moreover, there was the plan then to move to Ede in Osun state and all the staff could not be taken. I was affected. But because God is faithful and I had a good record, I was allowed to get a sweeping contract with the university after the movement to Ede. We are about seven contractors.”

Does it mean that Ifeoluwa Opeyemi was attending lectures and at the same time sweeping the classrooms of same university she was attending? “Yes, confirmed her mom again, “but it was only when she was not having classes. Also, she was helping out on Saturdays. I had joy in doing my job because the children I’m doing it for, appreciates it and appreciates me. It doesn’t matter what any other person thinks.”

And where did Ifeoluwa’s spoken good English originate from? The mom had a ready answer. “No matter how poor I have been, I have always valued giving my children good education. So right from early age, I placed them in good schools where I knew they will be well taught. Back at Redeemer Secondary School, I owed school fees from time to time because; my salary was not carrying us. Sometimes Ifeoluwa didn’t have food to eat during break time. At such times, she used to come to my office, I would hide her under my table, buy groundnut and soak gari for her. When she finishes that, she would then run back to the classroom. So most often it is what we have that we ate. Today, I thank God that He had never made me regret putting them in good schools. It has been a good investment. Her foundation has been solid. By God’s grace her future will be good ad she will know God more and get married when the time comes.”