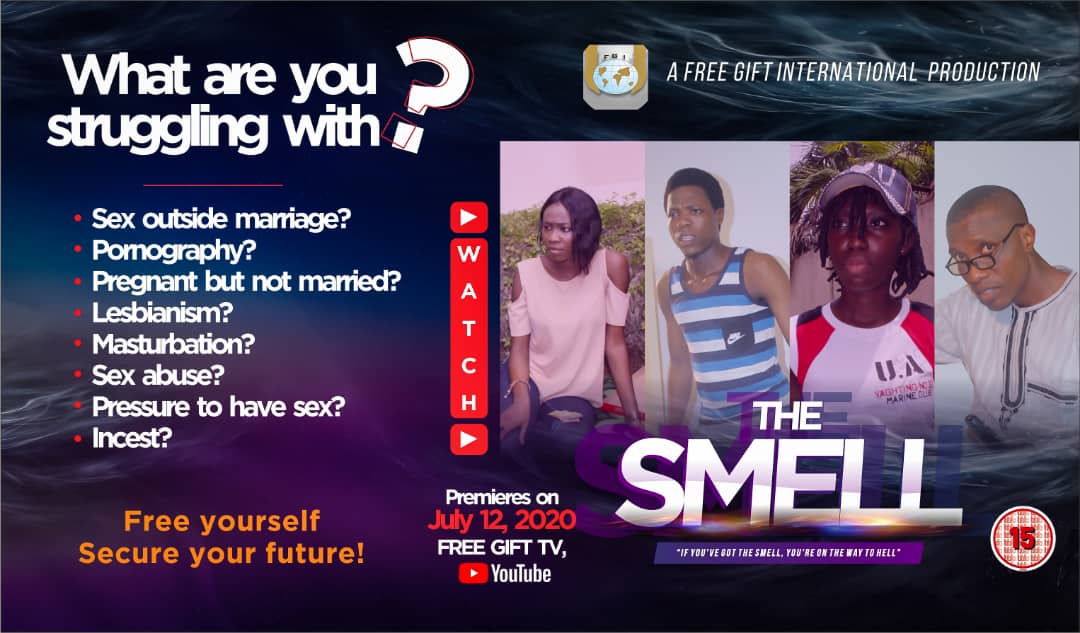 The smell is a new movie produced by Free Gift International Film and theatre Ministry scheduled for release on their YouTube channel FREEGIFT TV on 12 July 2020.

The movie directed by Ayotunde Yoloye is a bold initiative to delve into the many realms of an issue that many are involved in but few people want to talk about. Sex! If ever there was an issue that people need to talk about it is the issue of sex, their sexuality and dealing with sexual pressure (from within and without). The smell talks about it. The movie which was shot on location in Lagos in 90 minutes chronicles the lives of the members of two families that are connected and intertwined by a series of bizarre but yet not uncommon circumstances.

Kate played by Banke Amole-Adams, is a sexually dissatisfied Christian wife that has never really enjoyed sex with her husband but has not been able to communicate this to him. She can share her problems with her close friend Judith (played by Moyo Ola-Oludiya) and leaders in church but not with her husband. In a bid to address this issue she considers using pornography to spice up her sex life. An unplanned pregnancy further complicates her life as she struggles between doing what she knows is right and the easy option of an abortion that will make the problem go away.
Kate’s husband Fred played by Eric Amole Adams is unemployed. He is a spiritually sensitive man with a strong passion for evangelism and soul winning. However, he is somewhat inhibited by his weakened financial position and therefore sometimes finds it difficult to put his foot down on issues in his family, particularly when dealing with his wife who is the bread winner of the family.
Mary aged 15, is Kate’s daughter played by Deborah Agboye in her first appearance on screen. She is under pressure from her peers to lose her virginity like them. Mary struggles internally not to bow to the pressure but deep down is curious to learn more about and experience the pleasure of sex. Her parents are not talking to her about it so the closest people she has to give her guidance are her friends and Akpan, her parent’s houseboy played by Francis Olorunyomi who is constantly looking for young girls he can sleep with. His gentle mien makes him the ultimate (unsuspecting) sex predator.
Kate’s neighbor, Deaconess Mary played by Favour Abraham, is a woman who is on fire for the Lord, always actively involved in one programme or the other for the church or ministry. She appears to be in full control of her life, has a happy marriage and a reasonably good relationship with her husband.  She is the go to person for many believers for counsel on marital issues particularly on sex related matters. Her husband played by Chester Osagie, is a respected elder in the church. He is a strict disciplinarian who keeps his children and indeed all young people around him on a tight leash, a role his wife really appreciates since her commitment to ministry takes a toll on the time she has available for her children.
Deaconess Mary and her husband have two children – Tony and Feyi each, with personal struggles of their own. Tony played by Lanre Sodipe is a handsome sexually active young man who just must have his regular dose of sex. He doesn’t see any problem with having multiple sex partners as long as he takes the right precautions to avoid any unwanted pregnancy. His philosophy is simple: learn how to use your sexual apparatus in your youth so you can enjoy a sexually fulfilling life in future. Once he sets his sights on a woman, he doesn’t stop until he has slept with her. His sights are now set on Kemisola (played by Busola Onabanjo in her first appearance on screen), the pretty prude amongst her friends, committed to a life of sexual purity and determined to go to her marriage bed as a virgin. Kemisola is always standing for Jesus in spite of the efforts by her friends to ridicule her or get her to compromise in relationships with the opposite sex. Tony knows this but is still determined to sleep with her anyway.
Feyi played by Josephine Alabi in her first appearance on screen, seems to know a lot more about sex than girls her age. She craves for the attention of her mother who is just too busy working for the Lord to give her the time she needs. Though both her parents are ministers of the gospel she has her doubts about Jesus and his love for her.
As these characters interact with each other some soon get entrapped in a web of lies and the snare of Soul ties and are gradually thrust into the murky waters of sex abuse, Lesbianism, masturbation, pornography, sex outside marriage and the challenge of dealing with sexual pressure in an increasingly sexually permissive world.. Unknowingly they begin to carry unusual smells around and the odour they exude progressively becomes more offensive. Events finally compel them to confront the root cause of the strange smell that follows them.
This movie is a must watch for both the young and old who are sexually active but unmarried, have been sexually abused or are struggling to deal with sexual pressure or deviance. It is a movie for married couples dissatisfied with their sex lives and especially for teenagers and youths under the onslaught of peer pressure for sex. It is an eye opener for parents, church leaders, school teachers and leaders of young people to the multifaceted dimensions of sex and sexuality amongst the youth in today’s world. It is a movie for all who seek to be able understand and give sound counsel on the sexual realities and challenges we all face today. It is a movie for all who desire to live sexually compliant lives before God.
https://youtu.be/UqxARIFbrT0

Related Topics:ENTERTAINMENTFeaturedThe Smell
Up Next

The Boys are Back In town!