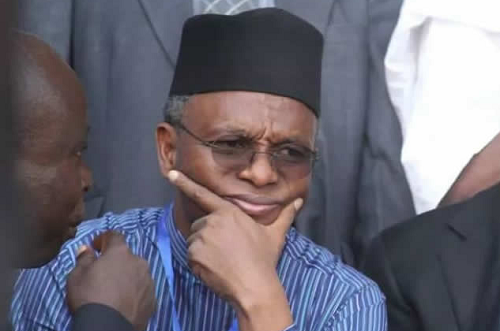 Gov. Nasiru El-Rufa’i of Kaduna State, on Tuesday said those involved in precipitating the southern Kaduna crisis would be tracked down and prosecuted.

The governor told the Senate Ad-hoc Committee on Southern Kaduna Crisis that the government would not hedge in prosecuting those involved.

“There is a lot of fake news on the crisis. They take pictures of the crisis in Rwanda and Boko Haram and post it as happening in southern Kaduna. This is done every day because there are no consequences.

He charged the Senate committee “to see the reality of what is happening in southern Kaduna as against the fiction.”

The governor also advised the committee not to believe anyone “based on his credibility or apparent credibility”, including the statement credited to the Catholic Church in Kafanchan, which he described as “totally false.”

He further told the committee that there were several “irresponsible comments on the crisis by people who should know better.”

He also accused some traditional rulers in the area of perpetuating the crisis for selfish reasons, but said the government would also prosecute them.

“Most of the traditional rulers, community leaders, religious leaders are accomplices and are part of this problem, they don’t want a solution.

“But as i said, everyday we are getting wiser, we are learning we are going to approach this problem in three steps.

“One, is law enforcement. We are going to apply the law, whoever is suspected will be arrested and prosecuted.

“We are also going to ensure that the state government along with security agencies have a monopoly of violence, its the only way.

“All those talking about self help, preaching hate, we are documenting them and we are going to frame charges against them, wherever they are.

“We have one Nigeria Police, you may be in Lagos writing nonsense, you will be arrested and brought to Kaduna and we will put you before a judge to prove that you have not done this. “We will charge them for been accessories to murder, charge them for plethora of offences.” The governor said the administration would embark on peace building with those not involved in the crisis.

“The third is to maintain and sustain enhanced security presence in southern Kaduna,” he said, adding that the government would handover a facility for the quick take off of the military garrison in Kafanchan. Earlier, the Chairman of the committee, Sen. Kabir Gaya had told the governor that their target was to investigate and find solution to the crisis.

“Our mission is to interact, discuss with government, stakeholders, community leaders, security agencies on the remote causes of continuous crisis in the sourthern part of the state. “Information received so far is commendable on government effort on addressing the crisis,” he said.

Gaya advised the governor to continue engaging the people through constant interraction to bring about lasting peace.

CAN, PFN calls for the resignation of President Buhari