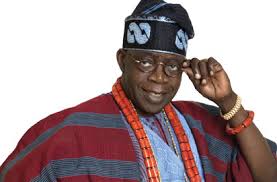 All Progressives Congress (APC) National Leader Asiwaju Bola Tinubu has commiserated with Lagosians and Governor Babajide Sanwo-Olu over the Lekki toll plaza incident  and the hijack of the #EndSARS protests by hoodlums who destroyed private and government properties.  He sympathised with those who lost their loved ones in the violence.

Speaking to journalists on Saturday at the State House, Marina, Asiwaju Tinubu, who was accompanied by his son, Seyi said the “looting, carnage, burning and invasion of police stations and stealing of arms and maiming the innocents”  “is handshake beyond the elbow.”

Tinubu, the first governor of Lagos State in the Fourth Republic, also debunked the report in  the social media that he fled Nigeria for safety after  Tuesday’s shootings at the Lekki Toll Gate.

“The panel is independent and I trust the caliber and character of the people there.”

Making reference to Sanwo-Olu’s handling of the protest before the curfew, Tinubu said the Governor did what he should have done under the circumstance. He added that Sanwo-Olu, whom he described as youth-friendly, listened to the protesters and took their demands to the President in Abuja.

“He (Sanwo-Olu) quickly went to Abuja with the five for five and the government immediately went into action.”

“We saw on television that he delivered the message to Mr. President. The President didn’t say no. The President gave him appointment within a few hours. That is responsive enough for people to go to town but where we are we getting the looting, the carnage, the burning and invasion of our Police stations and stealing of arms and maiming the innocent. It is handshake beyond the elbow,” he said.

Responding to the report that he flew out of the country immediately after the Lekki crisis, Tinubu said:“I didn’t go nowhere; I am a Lagosian. And I still hold the title of Asiwaju of Lagos State and I am still the Jagaban. Whatever they think; fake news is all over the place. They said my son, Seyi was kidnapped. He is here (Tinubu pointed at his son). It is all a joke.”

He urged Lagosians to embrace peace and set about healing the wounds inflicted by the violence.

With Unity, Lagos Will Bounce Back To Life – Speaker Obasa